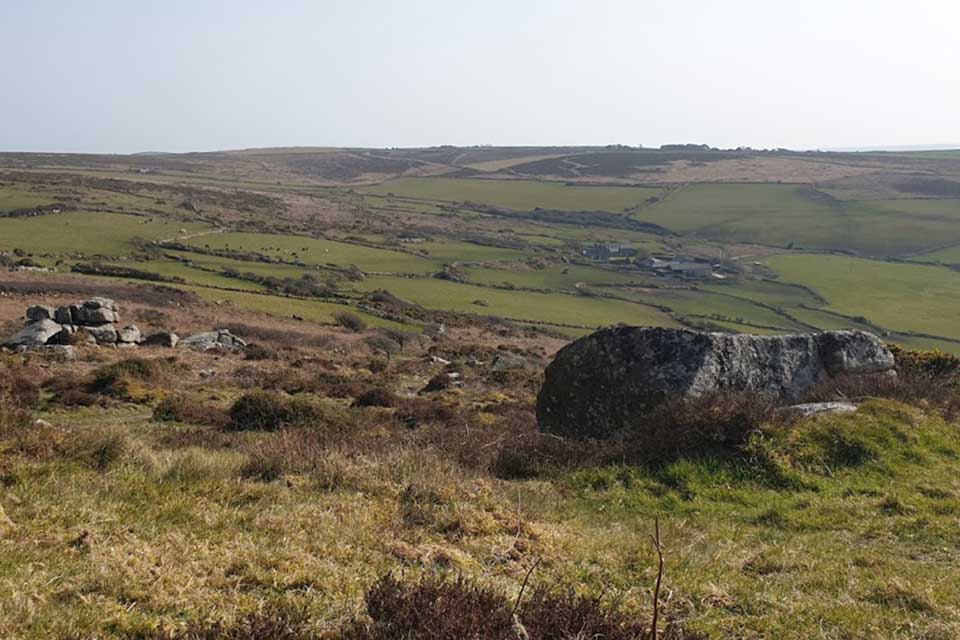 Walking his dogs through the Zennor moors, a writer in Cornwall contemplates the area’s literary history and discovers the ever-growing distance between the new reality brought by the pandemic and his family’s plans for a two-year stay on the Avenue Katherine Mansfield.

What does it take to decide to up sticks and live abroad? More than just a name, although I confess I liked the idea of living on the Avenue Katherine Mansfield in Menton, the last outpost of France on the Côte d’Azur before Italy. We’d been visiting the town for the past few years, and a villa was available to rent on the road named after the New Zealand modernist. We were in Menton in February, in the days before coronavirus took hold in Milan. We viewed the villa. We took our nearly-three daughter to a maternelle. We found a dance school, and a dog sitter, and we agreed: it was now or never. We signed up to rent the villa for two years, from 1 September.

Back in Cornwall we told our parents and made our plans. I bought Caroline a selection of Mansfield’s short stories. I was punished for not ordering the book from the Edge of the World, Penzance’s suitably named bookshop: Amazon’s delivery driver knocked on my door, smiled, and told me he’d put it through the letterbox of No. 7 opposite, only to realize our No. 7 was its intended destination. Kath, the other No. 7’s owner, was out, so I texted her to ask if I could pick up the book that evening.

Kath didn’t reply, but that night the news took a turn. Coronavirus was not “just a cold”—the view espoused by some French and Italian friends over dinner before we left Menton. It was deadly. Swathes of people were ill in northern Italy. In the coming days their death rate would rise and rise. Italy would go into lockdown, as would Spain and France. And finally, on 23 March 2020 and against every fibre of his libertarian soul, Prime Minister Boris Johnson would bring lockdown to the UK too. Amid all this, Katherine Mansfield’s short stories were forgotten—and moving to Menton, a gentle gesture of post-Brexit Europhilia, was put on ice.

The weekend before lockdown I walked the dogs on the moors above Zennor.

The weekend before lockdown I walked the dogs on the moors above Zennor. D. H. Lawrence lived in the village with his German wife, Frieda, at the beginning of World War I. The couple was ordered to leave under a provision of the Defence of the Realm Act in 1917, on suspicion of being German spies. Lawrence was dumbfounded, writing to Lady Cynthia Asquith, “We are as innocent even of pacifist activities, let alone spying of any sort as the rabbits in the field outside.” But if history has not revealed Lawrence to have been on a Teutonic payroll, it does show that he tempted fate. In an earlier letter (1 February 1916, to J. D. Beresford), he described the Cornish as “detestable . . . like an insect isolated within its own scaly, glassy envelope, and running seeking its own small end. And how foul that is!”

Despite his sentiments, two months later Lawrence wrote to Mansfield and her second husband, John Middleton Murry, imploring them to decamp to Zennor too. He’d found another house, twelve strides away; it was “very old, native to the earth, like rock, yet dry and all in the light of the hills and the sea.” His vision of the quartet living happily at Tregerthen, Zennor, St Ives, was short-lived—Mansfield and Murry left after only a few weeks.

Lawrence, Frieda (a cousin of German World War I pilot Manfred von Richthofen, the infamous Red Baron), Murry, Mansfield: incomers all. Perhaps they would have approved of lines from “To the Mermaid at Zennor,” by the English poet John Heath-Stubbs, who also lived in Zennor for a time in the 1950s:

This is a hideous and a wicked country,
Sloping to hateful sunsets and the end of time,
Hollow with mine-shafts, naked with granite, fanatic
With sorrow.

Wickedness had slipped into dusk on an earlier walk on the Zennor moors. I was alone, save for the dogs, and found myself tramping in the garden of a long-deserted house. In the far distance whitecaps on the sea were visible; closer was the house known as Eagles Nest, where the artist Patrick Heron lived for many years. What was this place, atop the hills in the middle of nowhere? An old, battered 4×4 was outside, its windows smashed in and glass underfoot. Rotting wood on the frame of the house seemed to cackle in the sharp north-easterly wind. Dereliction was all around. I didn’t like it, and didn’t go inside.

Wickedness had slipped into dusk on an earlier walk on the Zennor moors.

I returned the weekend before lockdown. The roads around Zennor were full of camper vans and large, gleaming SUVs. Everyone, it seemed, knew that lockdown was on its way; many had bolted for second homes and holiday lets in Cornwall. I parked my car in a layby and made for the ruined house. By now, parts of a jigsaw had come together. I remembered a friend’s tale of a house high on the moors above Zennor in which Aleister Crowley, the writer and occultist, had apparently performed a black mass. Worse, in fact: the ceremony had resulted in the murder of Katherine Laird Arnold-Forster, who lived in Eagles Nest in the 1930s. Ka Cox, as she was known, was quite the local celebrity: a friend of Virginia Woolf and lover of Rupert Brooke, her death was reported in the nationals as well as the local press.

So much for the stuff and nonsense of the occult: Cox died of a heart attack. But this was sure to be Carn Cottage, supposed scene of “the Tregerthen Horror,” and I was damned if I’d be scared off. The dogs and I made our way along a track overgrown with gorse, pausing only to stand the requisite six feet away from a mountain-biking couple and sundry other walkers. They’d left their holiday homes and camper vans and were eschewing Carn Cottage in favour of Zennor Quoit, an ancient burial chamber. I’d never known the Zennor moors so populous, but we had the house to ourselves. The dogs were neither disquieted by the graffiti-strewn walls nor the outsize granite fireplace, which could easily have housed a cauldron or three. I felt fine too. The half-light of dusk can play tricks, but now, in the bright afternoon sun, I stood in the dilapidated cottage and wondered who owned it. There was no running water. No electricity. No vehicular access. Nothing. But someone had lived here once. Could it be inhabited again?

Nick, a former miner, had the answer. The advent of lockdown did not constrain his work as a builder, and he was doing some work on our house. I asked Nick, who knows west Cornwall like the back of his hand, about Carn Cottage. “The artist Margo Maeckelberghe used it as a studio for many years,” he said. “Before that, another artist, Bryan Wynter, lived there with his family.” Nick thought Maeckelberghe’s children had tried to sell the cottage a few years ago, to no avail.

A few days later, by the time lockdown had brought unease to every human interaction, I parked my car in the same layby and walked the dogs again to Carn Cottage. This time, the road was denuded of camper vans and there was no one, anywhere. I felt justified in driving my car to walk my dogs in a place no more than three or four miles from my home—it was not expressly prohibited by law—but a vague sense of fear had returned. This time it was driven by paranoia. Would the police stop me on the way home? Would I be fined? Named and shamed, like the couple who’d dared to walk their dogs in the Peak District only to be filmed by a police drone and broadcast all over the media for indulging in a nonessential activity?

Carn Cottage seemed eerier than ever. I thought of a friend called Billy. I’d surfed with him in the past. He was one of Bryan Wynter’s children and lived here for a while. I wondered about Kath. Where was she? It had been three or four weeks since I sent my text, and she’d never replied. Somehow, my phone found a signal and at that point a message from Kath arrived: she said she was just back from New Zealand. “Got stuck as all flights getting cancelled. But managed (don’t know how) to get flight via San Francisco. Thousands still stuck. A book’s been delivered to me from Amazon, that is your order. I’ll leave it outside your house later.”

It was time to go. As I began the descent in the lea of Zennor Hill I saw a man. He was hovering near my car, seemingly perplexed. I wondered if he was lost. Pressing on, the path dipped, and stumps of gorse and bracken merged with west Cornwall’s endless granite to obscure my view. Regaining the open path, the man had disappeared. Zennor lay below in the now-fading light of hills and sea. I reached the layby and put the dogs in the boot of the car. I turned the ignition and started to edge onto the road. In my wing mirror, I saw the man. He was some fifty yards away, running toward the car. I slowed, for surely he was lost, and needed a lift. Then I saw him raise a camera, stand still, and photograph my car. Menton and Mansfield, I realized, were further away than mere space and time.