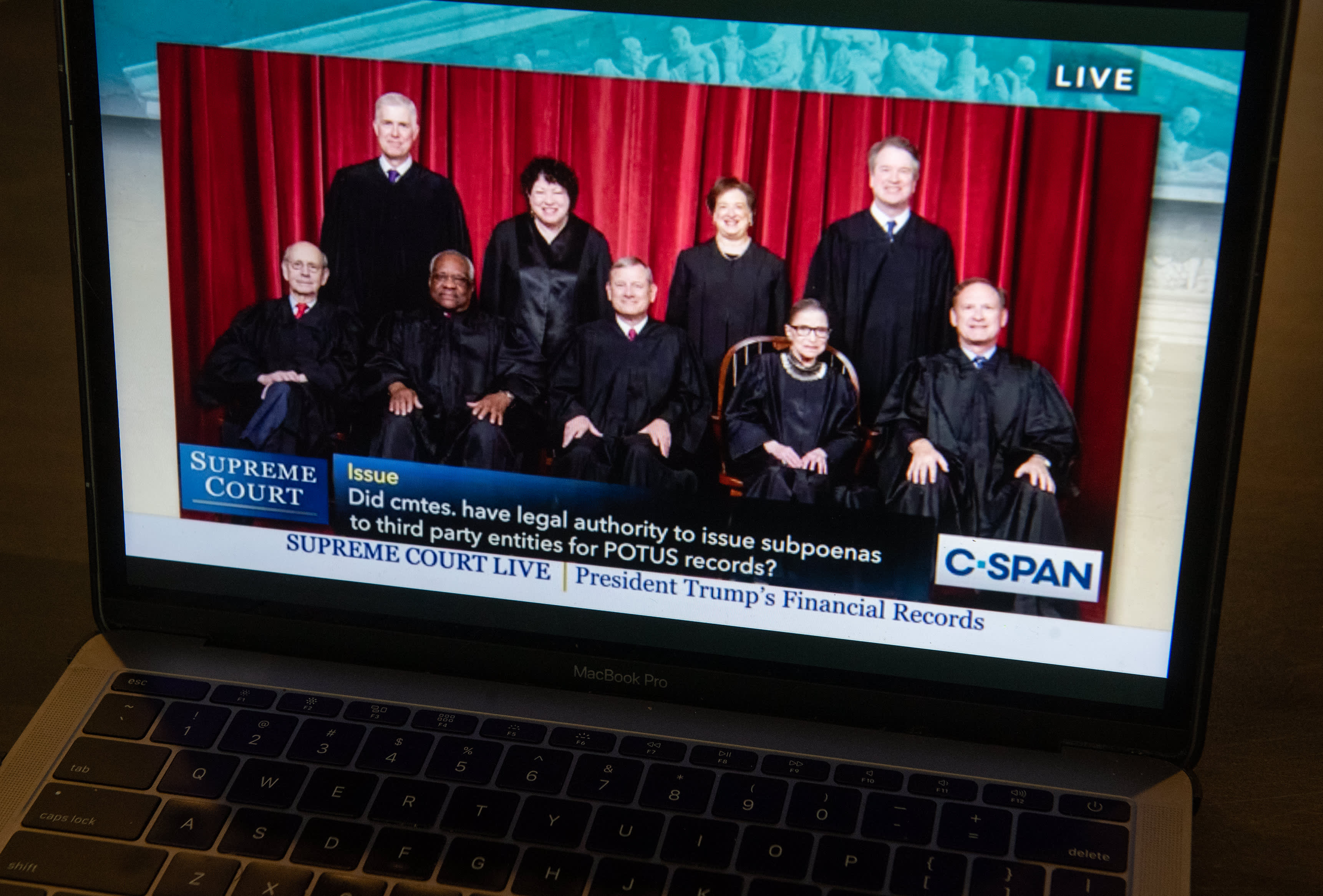 An audio feed of Supreme Court oral arguments in Trump v. Mazars and Trump v. Deutsche Bank AG, dealing with the subpoenas from the US Congress to obtain US President Donald Trumps financial records, is heard via a teleconference due to COVID-19, known as coronavirus, as seen on a laptop in Washington, DC, May 12, 2020.

The Supreme Court on Wednesday wrestled with a dispute over whether Electoral College voters have a constitutional right to diverge from their state’s popular vote in two cases that could have implications for November’s presidential election.

The arguments featured hypotheticals about what would happen if electors were to take a bribe, get hacked by a foreign government or vote for a giraffe.

The question in the cases is whether Electoral College voters can be penalized under state law if they do not vote for the candidate who wins the state popular vote. Lower courts in Colorado and Washington came down on opposite sides of the issue. In January, the top court agreed to weigh in.

A so-called “faithless elector” has never affected the outcome of a U.S. presidential election. Attorneys on both sides, however, have warned that it could happen in a close race.

The justices’ questions largely focused on what limits applied to both electors and states in regulating voting in the Electoral College, America’s system for indirectly selecting presidents.

Larry Lessig, an attorney for the Washington electors, and Jason Harrow, who represented electors in Colorado, argued that states could only remove Electoral College voters for offenses like bribery once they had been convicted.

While the state can require electors to take a pledge to support the candidate who wins the popular vote, they cannot punish an elector who violates that pledge, they argued.

Attorneys for the states argued that electors can be regulated far more strictly. Colorado Attorney General Philip Weiser said that under his view, a state could even bar electors from submitting a vote for a candidate who did not visit the state.

Forty-eight states, with the exceptions of Maine and Nebraska, allocate all of their Electoral College votes to the winner of the state popular vote. In 32 states and Washington D.C. there are laws on the books requiring electors to vote for their pledged candidate.

The justices seemed to be seeking a middle ground that could enable states to remove electors who solicited bribes without giving states unbridled authority to dictate for whom electors may cast their votes.

The arguments began at 10 a.m. ET and lasted just under two-and-a-half hours. They were conducted over the phone and streamed live to the public as a precaution against the spreading coronavirus.

The cases came to the high court just months before President Donald Trump will face off against apparent Democratic nominee Joe Biden in November’s contest. Decisions in the cases are expected over the summer.

Commentators noted that the arguments lacked the partisan furor that has animated several of the court’s other high-profile arguments of the term.

Laurence Tribe, a leading constitutional scholar at Harvard Law School, wrote in a post on Twitter that the arguments “displayed nine really good constitutional thinkers trying to work their way through a complex and unsettled legal issue where the justices’ partisan and ideological leanings offered no guidance.”

“A breath of fresh air,” he wrote.

‘Judges are going to worry about chaos’

Justice Samuel Alito and Brett Kavanaugh both pressed Lessig on the possibility that a win for his clients would unleash chaos.

“Do you deny that that is a good possibility?” Alito asked Lessig.

“I want to follow up on Justice Alito’s line of questioning and what I might call the avoid chaos line of judging,” Kavanaugh said later. Kavanaugh said that when a case is “a close call or tie-breaker,” the top court will generally avoid facilitating uncertainty.

“Just being realistic, judges are going to worry about chaos,” Kavanaugh said.

Lessig responded that he likelihood of chaos was “extremely small.”

But the justices, including several conservatives, also expressed concerns about giving states too much authority over presidential electors.

“We have to interpret the Constitution to mean what it means regardless of the consequences,” Alito said at one point.

Kavanaugh asked Weiser why the framers of the Constitution would go through the trouble of establishing an Electoral College if voters in it ultimately lacked discretion.

“What is the purpose of having electors?” he asked.

Justice Elena Kagan, who appeared to favor the arguments made by the states, asked Harrow what she should do if “I read the Constitution and I find that it just doesn’t say anything about this subject.”

Harrow responded that Kagan should then look to the original understanding of the Constitution.

“I would think that pretty quickly it slipped even if you’re right,” Kagan responded, suggesting that even if the Electoral College was originally seen as having a say in elections, in practice it soon became a formality.

‘How much difference does it make?’

While much of the questioning focused on the potential chaos that could erupt if enough electors decided to go rogue, some of the justices wondered whether that outcome was all that likely.

“Faithless voting, throughout the years, has always been rare. How much difference does it make?” Justice Ruth Bader Ginsburg asked Weiser.

“Where it really might matter is if somebody died or if some catastrophe happened or worse,” Breyer said.

Justice Neil Gorsuch, citing technical legal issues and the low financial stakes at issue, suggested that the court might have erred by taking the case at all.

But Weiser, arguing for Colorado, argued that the stakes were enormous. Faithless electors, he said, could occasion a “constitutional crisis” and sway the outcome of a presidential election.