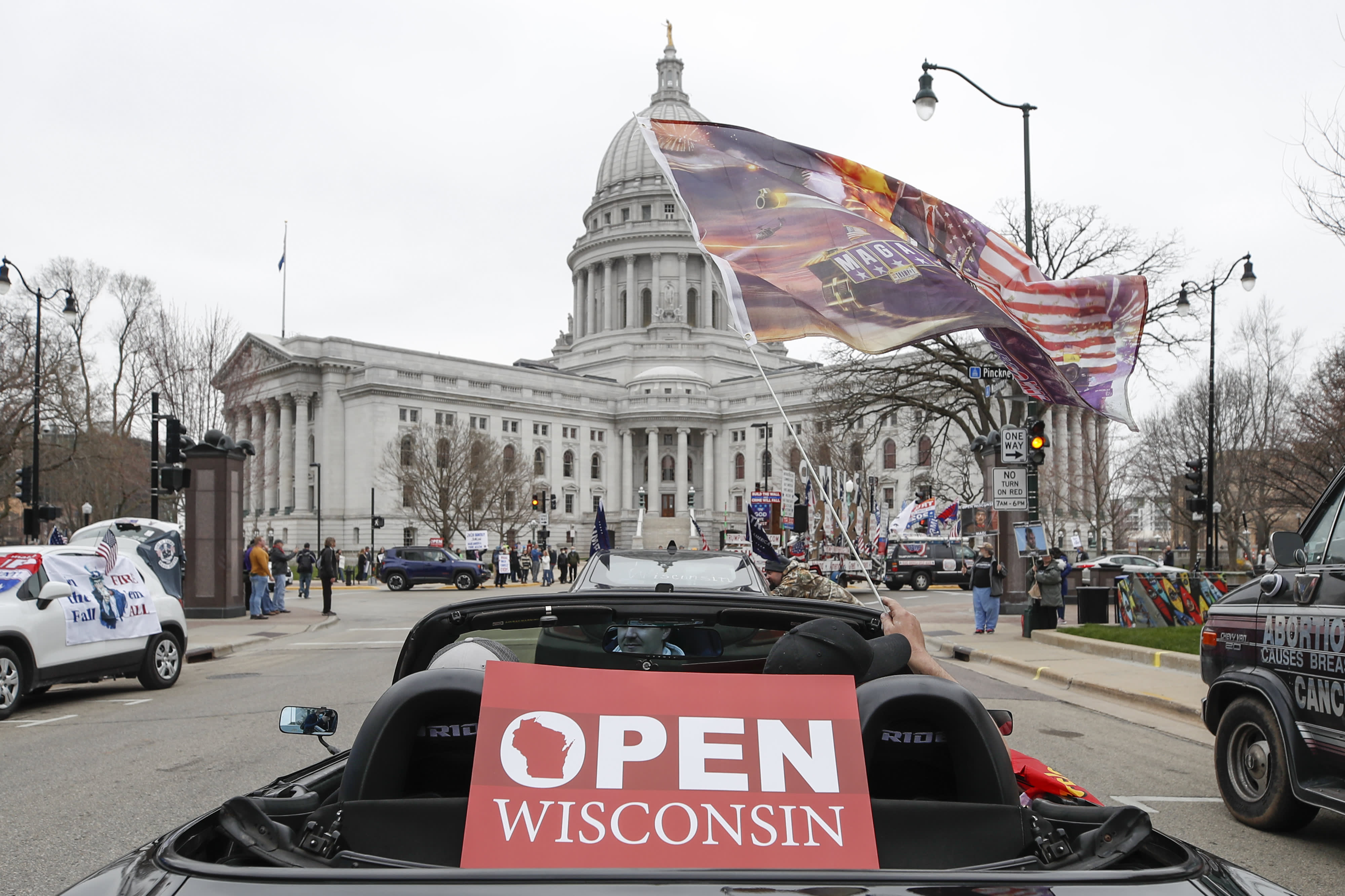 People in cars participate in a protest against the coronavirus shutdown in front of State Capitol in Madison, Wisconsin, on April 24, 2020.

The Wisconsin Supreme Court on Wednesday struck down the state’s stay-at-home orders during the coronavirus pandemic as “unlawful, invalid and unenforceable” after finding the state’s health commissioner exceeded her authority.

In a 4-3 ruling, the court called State Department of Health head Andrea Palm’s directive, known as Emergency Order 28, a “vast seizure of power.”

The order directed all individuals present within the state of Wisconsin to stay at home or at their place of residence, subject only to exceptions allowed by Palm, the ruling says. The order, which was set to run until May 26, also put in place travel restrictions and business restrictions, along with threats of jail time or fines for those who don’t comply.

The ruling says the judges weren’t challenging Democratic Gov. Tony Evers’ emergency powers, but the decision effectively undercuts his administration and forces him to work out a compromise with the Republican-controlled legislature.

One of the dissenting judges, Justice Rebecca Dallet, said her conservative colleagues in the majority were the ones who were exceeding their authority, and noted past precedent for Palm’s directives — a months-long stay at home order by the state’s health commissioner during the 1918 Spanish Flu pandemic.

“This decision will undoubtedly go down as one of the most blatant examples of judicial activism in this court’s history. And it will be Wisconsinites who pay the price.”

The decision comes as a result of the legislature suing the health department, charging Palm’s directives were an overreach and asking the court to grant relief that gives the legislature a “seat at the table” in the rule-making process.

During oral arguments in the case, Justice Rebecca Bradley suggested the orders amounted to “tyranny” and at another point referenced Japanese internment during WWII.

The chief justice actively questioned both sides, and later criticized for seeming to downplay a spike in the cases connected to a JBS meatpacking in Green Bay.

“These were due to the Meatpacking though, that’s where the Brown County got the flare. It wasn’t just the regular folks in Brown County,” Chief Justice Patience Roggensack said in response to the Health Department attorney highlighting the easy spread of the virus.

There have been almost 11,000 confirmed cases of COVID-19 in Wisconsin and 421 deaths, according to the NBC News coronavirus tracker.

The 15 Best Jeans For Men, At Every Fit And Budget
Nipsey Hussle’s Alleged Killer Gets Jumped in Jail, Requiring Staples in Head
HHS secretary vows women in states that ban abortion will have access in cases of rape, incest, risk to woman’s life
‘Obi-Wan Kenobi’ Finale Audience 20% Higher Than ‘Book Of Boba Fett’; ‘Dr. Strange 2’ Ahead Of ‘Eternals’ In Disney+ Viewership
Inflation and rising interest rates have stressed the 60/40 investment portfolio strategy — ‘but it’s not dead,’ says financial advisor