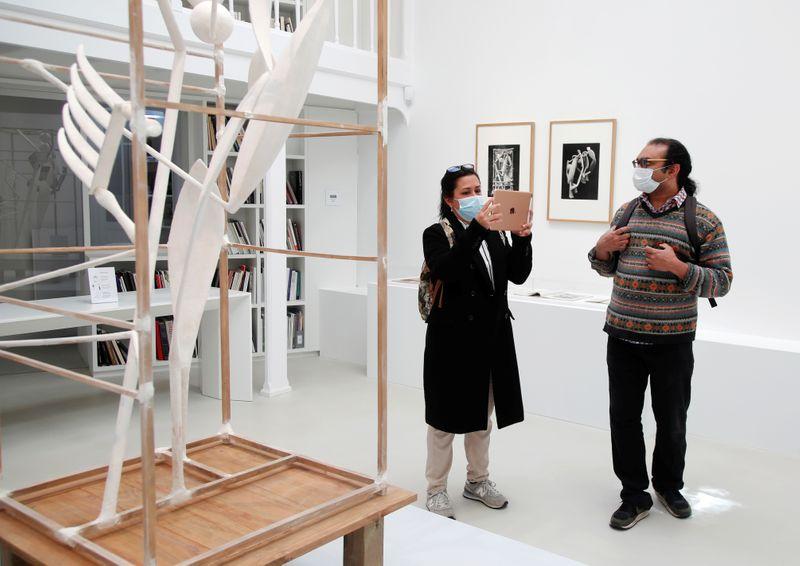 PARIS (Reuters) – A Paris museum dedicated to the work of sculptor Alberto Giacometti re-opened to the public on Friday, one of the first art centres to test the waters after France eased its coronavirus lockdown.

Visitors attend the reopening of the Giacometti Institute Museum after France begun a gradual end to a nationwide lockdown due to the coronavirus disease (COVID-19), in Paris, France May 15, 2020. REUTERS/Charles Platiau

Allowing 10 people in every 20 minutes, with reservation only, the Giacometti Institute’s new guidelines include spaced out queuing spots and shortened opening hours.

But with major museums that cover much greater surface areas like the Louvre obliged to close for now, art lovers were happy to feast their eyes on the collection after France began exiting its 8-week shutdown on Monday.

“Outside work I usually spend my whole time in museums … and I’ve really been missing it since mid-March,” said Laurent Koch, a finance worker who was one of the first visitors at the Institute on Friday, clad in a face mask.

The museum, in a 350-square-metre Art Deco building in the Montparnasse district of Paris, has brought in new audio guides and made hand sanitizer available to try to make visitors feel safe and soak up the experience all the same.

“Everything has been done to make sure people feel completely protected and that they are not troubled by any other thoughts during their visit other than enjoying the exhibit,” said Catherine Grenier, who heads the Giacometti Foundation.

The museum will let in 180 people a day, three times fewer than usual.

The Giacometti Institute is a recent addition to Paris’ art scene. It opened in 2018 and contains dozens of paintings and sculptures carefully preserved by Giacometti’s wife after his death in 1966, as well as a reconstruction of his studio.

The Swiss sculptor, known for the elongated silhouettes of his bronze sculptures such as “L’homme Qui Marche” (The Walking Man), spent most of his life in Paris and created the bulk of his work in a tiny atelier – which might resonate with Parisians confined to their apartments during the pandemic, the museum’s Artistic Director Christian Alandete said.

“He’s an artist who lived in a very small space his whole life and produced a vast array of art works in 24 square metres, a testimony to the extraordinary capacity people can have to see beyond their confinement, to let their imagination run free,” Alandete said.