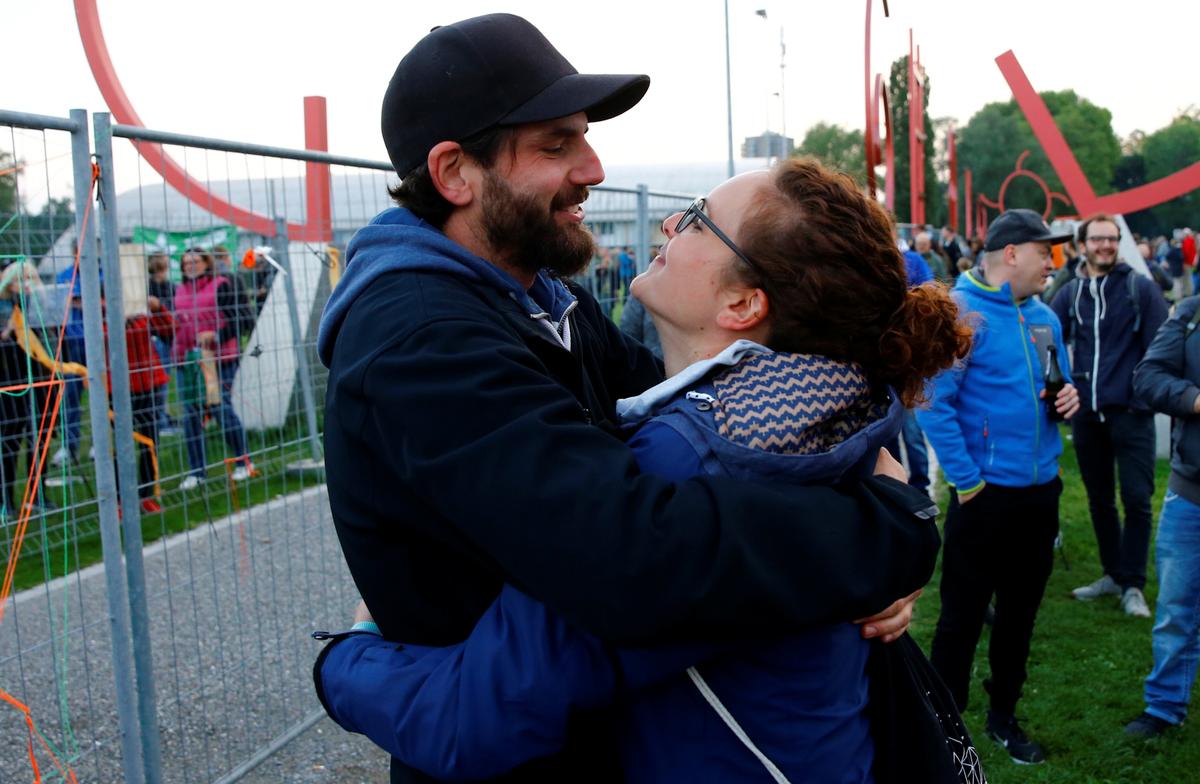 Couple Lukas from Switzerland and Leonie from Germany embrace after the removal of a double fence on the German-Swiss border, which was set up by Swiss and German authorities as a protection measure due to the spread of the coronavirus disease (COVID-19) in Kreuzlingen, Switzerland May 15, 2020. REUTERS/Arnd Wiegmann

On Friday, workers began taking down the fence between the German city of Constance and the Swiss city of Kreuzlingen, which had become a symbol of the division created by the global pandemic, since it was hastily thrown up to shut the border.

For weeks, couples have been gathering here to gaze at each other across no man’s land. But after Switzerland and Germany agreed to open up, the fence was due to come down by midnight.

Lukas, 34, and Leonie, 31, had expected the border to be opened earlier on Friday, and Lukas said Leonie was getting impatient.

She’s “a bit annoyed, actually very annoyed. Now she’s laughing across the border at me – her brother’s just given her a beer, I think that helped”, he said.

When they can finally cross, they will “go and have a meal, if there’s time, and then have the weekend together”, he added.

In ordinary times, on a continent where borders have gradually faded into insignificance, people can walk, cycle or even swim between the neighbouring lakeside towns.

In mid-March, however, German police erected the fence on their side of the border — roughly along the line where a barbed-wire barrier had separated the countries during World War Two.

Someone stuck a wry sign on the fence with a quote spoken by the Communist leader of East Germany just before the Berlin Wall went up in 1961: “No one intends to build a wall.”

When people continued to gather — and violate social distancing rules by hugging or even kissing through the chain links — Kreuzlingen authorities erected a second fence, to keep them apart.

Jean-Pierre Walter, a Swiss, has been driving up from Zurich to the fence to see his German partner, Maja Bulic, who has to drive south for three hours from her home near Heidelberg.

“Seeing the fence finally being dismantled is a sign that normal life can resume,” he said. “We have a strong relationship, and that helped us to make it through unscathed.”

Married couples who could prove they had a spouse on the other side were permitted to cross. Lukas, who would not give his surname, confessed that, although he and Leonie are not married, he had occasionally been able to talk his way past the guards.

Still it had been a strain: “Just the constant not knowing from one day to another when you’re next going to be able to see each other.”