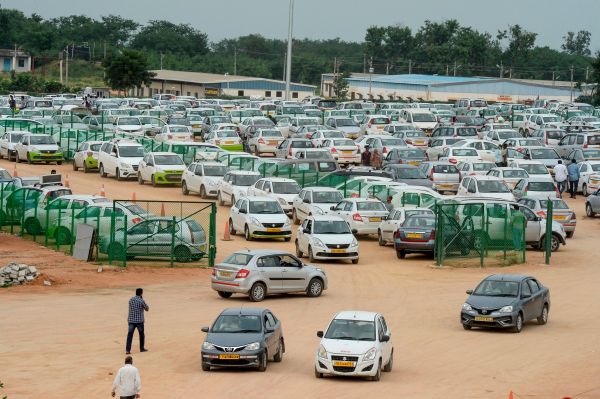 Ola said on Wednesday it is cutting 1,400 jobs in India, or 35% of its workforce in the home market, as the ride-hailing firm works to reduce its expense to steer through the coronavirus pandemic that has severely impacted mobility companies in the country.

Bhavish Aggarwal, co-founder and chief executive of Ola, shared the job elimination update with the team in an email today, in which he also revealed that the company’s revenue had dropped by 95% in the last two months as India enforced a stay-at-home order for its 1.3 billion citizens in late March.

An Ola spokesperson told TechCrunch that only employees working in mobility and food operations were impacted and that the job cuts were limited to teams in India. Ola Electric, a separate entity of the ride-hailing firm, remains unaffected of the layoffs.

“We had all hoped in the beginning that this would be a short-lived crisis and that its impact would be temporary. Over the past couple of months, all members of our extended leadership team have taken significant salary cuts to be able to help the organization delay tougher people decisions as we waited for the situation to evolve. But unfortunately, it’s not been a short crisis,” Aggarwal wrote in the email, which the company has since published on its blog.

“And the prognosis ahead for our business is very unclear and uncertain. It is going to take a long time for people to go out and about like before. With more companies preferring to have a large number of employees work from home, air travel limited to essential trips and vacations being put off for better times, the impact of this crisis is definitely going to be long-drawn for us. The world is not going to revert to the pre-COVID era anytime soon,” he added.

The employees who are being let go will be provided with three months of salary as well as insurance coverage for them and their parents, healthcare and emotional support until the end of the year, said Aggarwal.

India announced a lockdown in late March that shut all public transportation services across the country. In recent weeks, New Delhi has eased some restrictions and both Ola and Uber have resumed their services in most parts of the country except those where concentration of coronavirus cases is very high. As of today, Ola is operational in more than 160 cities across India.

Ola is the latest company in India to enforce reduction in its workforce. Uber let go about 500 employees in India as part of its first wave of job cuts earlier this month, as first reported by Indian news outlet Entrackr. It’s unclear how its most recent layoffs announcement impacts its teams in India.

Food delivery startups Swiggy and Zomato, both of which are also facing severe disruptions as the Covid-19 outbreak makes people cautious of ordering food online, have together eliminated about 2,600 jobs (with 2,100 in Swiggy alone) in their companies in recent weeks.

Travel and hospital firms such as Ixigo, MakeMyTrip, and Oyo have also cut several jobs or furloughed thousands of employees in recent months as their revenues drop significantly.

Ola today also unveiled a range of relief packages it has introduced in recent months to support its driver partners. Some of these include exemption of lease rental for drivers and providing them with a few hundred dollars if they or their family members test positive with Covid-19.

A person familiar with the matter told TechCrunch that Ola continues to hire for new roles in R&D and other tech departments and Ola Electric has also made several new hires in recent months.

The Top 4 Jewelry Trends That Will Dominate Next Spring
Rihanna to Headline Super Bowl Halftime Show
Flipkart Big Billion Days 2022 Sale: Best Deals on Laptops Across Budgets
GM delays return-to-office mandate after employee backlash
Kate Middleton and Meghan Markle Reportedly Didn’t Talk to Each Other at All During the Queen’s Funeral Events