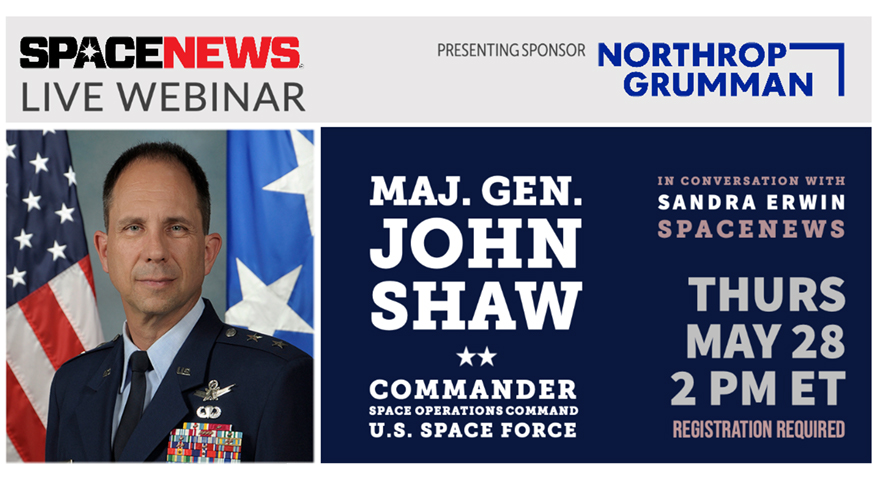 As NASA prepares to launch astronauts from U.S. soil for the first time since the space shuttle retired in 2011, the U.S. military is reviving the astronaut-rescue role it has been performing since the Apollo era.

Join us the day after NASA’s Demo-2 commercial crew mission, scheduled to launch May 27, for a SpaceNews Live discussion with Maj. Gen. John Shaw, the two-star general responsible for ensuring the renowned 45th Operations Group’s Detachment 3 team is ready at a moment’s notice to lead astronaut-recovery operations.

Astronaut rescue is a small but important part of Maj. Gen. Shaw’s duties as the head of the U.S. Space Command’s Combined Force Space Component, which plans and executes day-to-day military space operations and has tactical control of American and multinational space forces during a conflict.

Shaw will also address how the ongoing standup of the U.S. Space Force is bringing greater focus to the role space plays in all military operations and what’s at stake in defending the ultimate high ground.

Among the questions we will explore during this free-to-attend webinar:

*** Please note that the date of this webinar is contingent on the launch of NASA and SpaceX’s Demo-2 commercial crew mission. If Demo-2 slips, this webinar will be rescheduled with the intent of having Maj. Gen. Shaw join us within a few days of the launch. Your registration now will preserve your spot should we need to reschedule.

Northrop Grumman is building the OmegA launch system with reliability as its most important component. Because when there’s a job that needs to be done in orbit, complete mission success is the only feature that matters.