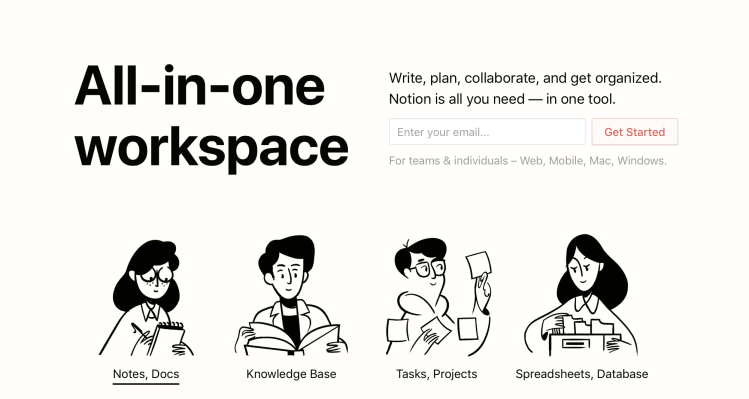 Notion, the fast-growing work collaboration tool that recently hit a $2 billion valuation, said on Twitter Monday that its service is blocked in China.

The productivity app has attracted waves of startups and tech workers around the world — including those in China — to adopt its all-in-one platform that blends notes, wikis, to-dos, and team collaboration. The four-year-old San Francisco-based app is widely seen as a serious rival to Evernote, which started out in 2004.

Notion said it is “monitoring the situation and will continue to post updates,” but the timing of the ban noticeably coincides with China’s annual parliament meeting, which began last week after a two-month delay due to the COVID-19 pandemic. Internet regulation and censorship normally toughen around key political meetings in the country.

For Notion and other apps that have entered the public eye in China but remained beyond the arm of local laws, a looming crackdown is almost certain. The country’s cybersecurity watchdog could find Notion’s free flow of note-sharing problematic. Some users have even conveniently turned the tool’s friendly desktop version into personal websites. If Notion were to keep its China presence, it would have to bow to the same set of regulations that rule all content creation platforms in China.

Its predecessor Evernote, for example, established a Chinese joint venture in 2018 and released a local edition under the brand Yinxiang Biji, which comes with compromised features and stores user data within China.

Just before its ban in China, Notion surged on May 21 to become the most-downloaded productivity app in the domestic Android stores, according to third-party data from App Annie. The sudden rise appears to be linked to its Chinese copycat Hanzhou (寒舟), which stirred up controversy within the developer community over its striking resemblance to Notion.

In an apologetic post published on May 22, Xu Haihao, the brain behind Hanzhou and a former employee of ByteDance-backed document collaboration app Shimo, admitted to “developing the project based on Notion.”

“We are wrong from the beginning,” wrote Xu. “But I intended to offend nobody. My intention was to learn from [Notion’s] technology.” As a resolution, the developer said he would suspend Hanzou’s development and user registration.

Some of the largest tech firms in China are gunning for the workplace productivity industry, which received a recent boost during the coronavirus crisis. Alibaba’s Dingtalk claimed last August that more than 10 million enterprises and over 200 million individual users had registered on its platform. By comparison, Tencent’s WeChat Work said it had logged more than 2.5 million enterprises and some 60 million active users by December.

Resources to Protect Reproductive Rights After the Overturn of Roe v. Wade
Shaq Donates $50K From Buffalo DJ Appearance To Family Of Shooting Victims
Locked In Movie Review: Testing Morality With a Fight to Survive
12 Of The Best Cowboy Boots For Men in 2022 (Even If Your Not From The Wild West)
Optical microphone images vibrations, women win both top prizes in UK young scientist and engineer awards