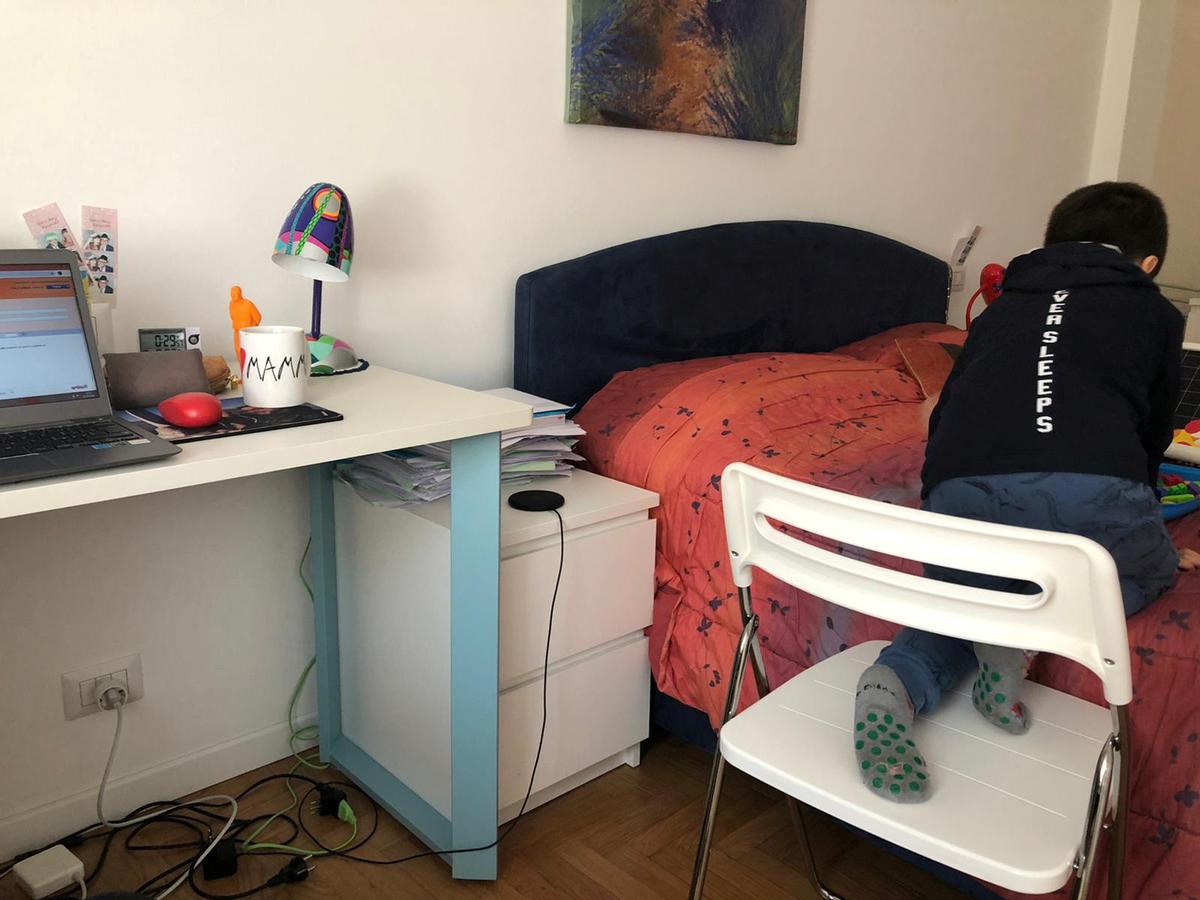 MILAN (Reuters) – Paola Berardi, 70, and her husband Mauro have taken care of their two grandchildren every weekday for the past decade while their daughter went to work in a chemical company. Every summer, they decamped with the twins to a seaside resort on the northern Italian coast.

Laura Solaro’s workstation is seen at her house, while her son Niccolo climbs onto the bed to play, in Milan, Italy May 15, 2020. Laura and her husband work from home due to measures taken to prevent the spread of the coronavirus disease (COVID-19), including the shutdown of kindergartens. Laura Solaro/Handout via REUTERS

After the COVID-19 epidemic detonated in Italy in late February, Paola only saw her 11-year-old grandchildren online, helping them with their daily homework via zoom. As the country emerged from a rigid, 10-week lockdown this month, the family reunited, but Paola worries about the physical contact.

While the new coronavirus has proved deadly for elderly people across the globe, it has dealt an especially crippling blow in Italy where grandparents play an outsized role in caring for children and are at the centre of a vital social safety net for the fragile economy.

As Paola and other older Italians isolate themselves to avoid a virus that could kill them, the epidemic has begun to tear at the unique bond between “nonni” and grandchildren — a tight, economically-beneficial relationship that has defined Italy for generations.

In Italy, grandparents spend on average 730 hours a year looking after their grandchildren, according to research for the World Bank published in 2016 by Marco Albertini, a professor of economic sociology at the University of Bologna. That compares with 576 hours in Spain, 360 in France and 288 in Germany.

“We have taken care of our grandchildren since they were little,” said Paola, a former middle school teacher who lives in a quiet village in the northern Italian region of Emilia Romagna. “But I think we will be somewhat scared of them when they start meeting their friends again.”

Her husband, Mauro, a diabetic, is particularly at risk. For now, the twin grandchildren remain closed within family ranks, but before long they will be pushing to see their schoolmates. For the daughter Valeria, who is separated from her husband, this is a big problem. Like many other Italians, she relies on her parents to take care of her children while she is at work.

A report by national statistics bureau ISTAT in February showed that in households where both parents worked, Italian grandparents were the primary childminders in slightly over 60%  of cases where children were aged between 0 and 5 years. This fell to some 47% when children were between 5 and 10.

By comparison, a 2015 survey by the Pew Research Center said 22% of grandparents in the United States provided regular child care. A 2014 report by King’s College London showed just 17% of British grandparents provided at least 10 hours of care a week.

“THIS SYSTEM IS NOW IN CRISIS”

The reasons grandparents are so important in Italy are partly cultural, says Alessandro Rosina, professor of Demography and Social Statistics at the Catholic University of Milan. The family has long been the glue of Roman Catholic, southern European society, which shunned the individualistic nature of Protestant Northern European and Anglo-Saxon countries.

There are also economic reasons. Italy has an army of older people who were able to retire early in past decades thanks to generous pension schemes, leaving them free to spend more time with their grandchildren. Governments have taken advantage of this, relying on family networks rather than creating extensive childcare facilities.

According to latest ISTAT data, the country’s daycare facilities only had spaces for a quarter of all toddlers aged between 0 and 3 years-old. Of those places, only half were state-financed and therefore offered capped fees.

“In southern Europe, reciprocal help is an important value, for emotional and material reasons. Young people leave home later than their northern European contemporaries. They live close to their parents, so their parents can help with child-rearing and then they, in turn, take care of elderly parents. Because of COVID, this system is now in crisis,” Rosina said.

The system of familial help was already fraying before the coronavirus. Retirement ages have been rising steadily in Italy over the past three decades and the days when women in the public-sector could claim a pension even before their 40th birthday are long gone. The basic retirement age is now 67 for both men and women, limiting the time nonni can dedicate to family support.

Regardless of coronavirus concerns, this means that more parents already have to rely on daycare centres, putting a strain on their finances. State facilities cost on average between 200-500 euros ($218-$545) a month per child. Private centres can easily cost double that – a big ask in a country where the average annual gross salary is just 21,600 euros.

With schools shuttered until at least September because of the COVID threat and family networks jeopardised, the government has stepped in, promising a one-time voucher of 1,200 euros to pay for babysitters and offering 30 days of annual parental leave to give mothers and fathers more flexibility.

However, these measures will not fill the potential hole left by grandparents should fears over contagion persist.

Laura Solaro and her husband, who live and work in Milan, have kept their son Niccolò away from his grandparents for two months. “I didn’t feel that I could put them at risk because of my organisational needs,” she says.

But she does not know how she will cope in future, with her work as a lawyer demanding ever more of her time. “It’s a real nightmare,” she says.

Some 95% of the 32,700 people who have died of the disease so far in Italy have been aged 60 or over, the national health institute says, underscoring the enormous vulnerability of the elderly.

Children appear to get infected less than adults, and most of those who do, display mild symptoms, if any. But their role in spreading the illness is still under debate.

A recent review of family clusters of COVID-19 found that children were the initial source of infection in less than 10% of cases. The study, produced by the University of Queensland and posted on the SSRN preprint platform in April, has been submitted to The Lancet medical journal but has not yet been peer reviewed.

In the absence of clarity and while the world awaits a vaccine, some families are looking to advances in testing to help reassure them.

When Italy imposed its lockdown in March, Gianni Reffo’s daughter and granddaughter moved in with him and his wife Valentina. That way, the mother Rossella could still work while they took care of the 9-year-old girl.

Rossella and her daughter have now returned to their own home and as a result Reffo, a retired nuclear physicist, and his wife have decided to only see the pair in their garden rather than in closed spaces to limit the chance of infection.

Plans for the annual family holiday on the Mediterranean island of Sardinia are on hold. Reffo is pinning his hopes on the rapid development of saliva tests, which researchers say can be done at home and provide results within an hour — much faster than the invasive nasal swabs that are currently in use.

“This would allow us to go to Sardinia with the child,” said Reffo. “Indeed, I think this would allow all grandparents to breathe easier. It costs little, it doesn’t scare the children and it’s fast.”

Although Paola and Mauro Berardi are fully aware of the risks of infection, they have decided to let the twins into their house for a few hours every afternoon.

“My daughter wanted to keep us safe and not send the kids over, but it was impossible for her to work with them all day at home. We just had to help,” said Paola.