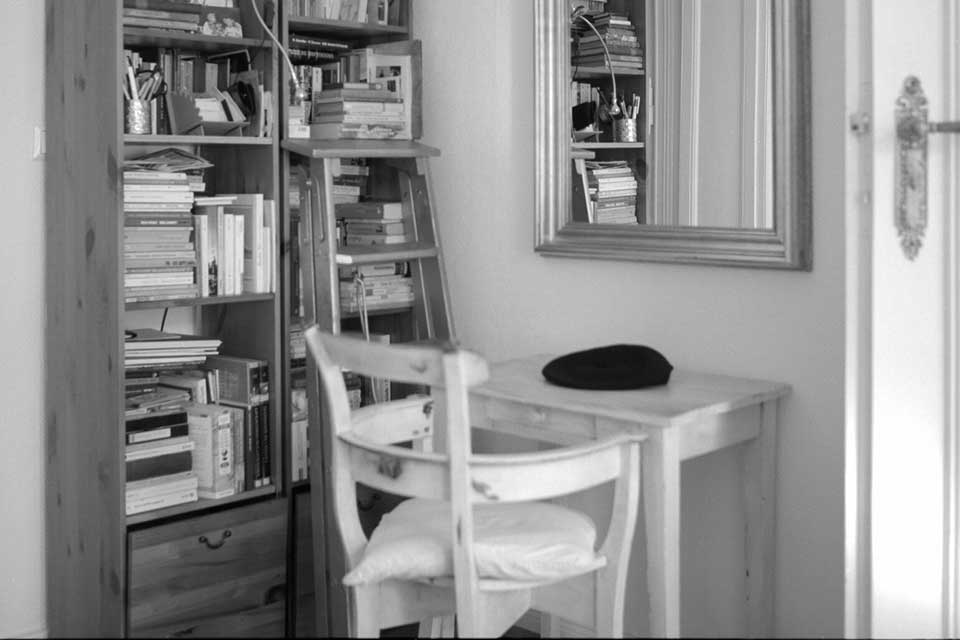 In the following essay, the author reflects on the jarring disconnect between a reader’s intimacy with an author on the page and an encounter in real time. Are we, as readers, owed anything by the author, and if so, what? Is reading ever reciprocal?

As a veteran bookseller, I’d watched lines form before authors, fans craning necks for a glimpse of the signing tale. Back then I viewed such queues with skepticism—at the time my favorite authors were all dead, and I found the adulation absurd. I’d see readers shaking with anticipation; I saw them sneak selfies; I saw them cry, and behave as if they were about to meet a Hollywood idol, or a god.

The whole charade struck me as detached from the essential act of reading.

But now I was the one clutching a book to my chest, a post-it with my name (spelled with an “e”) marking the title page, soon to be adorned with an autograph.

I had arrived at a moment I’d been anticipating for thousands of pages. Now those thin veils were drawn aside and there was nothing between me and the literary genius who had so often spoken into the minutiae and momentous events of my life. Our timelines had finally aligned.

As I approached, the author behind the table leaned back. His presence was strikingly leonine: powerful and perceptive but also furtive, trapped. The subtle backward gesture had been reminiscent of a flinch, or of someone bolstering themselves for another blow.

As I approached, the author behind the table leaned back. His presence was strikingly leonine: powerful and perceptive but also furtive, trapped.

He reached mechanically for the book before him. This man, I realized, was not there.

A tailored jacket fitted across the broad shoulders of his lanky frame; the thick mane of silver-brown hair I’d watched him smooth back as he bent over the podium during the reading; the deeply lined face framing luminous eyes, as if cut from Arctic ice that had melted into two deep pools. But the author was absent.

Looking down, he smoothed the title page with a beautiful veined hand and began to write. My vision blurred as I babbled incoherently, words that must have been indecipherable to this man, for whom English was not his first language.

“When I read Proust, I thought there was no other author for me, at least—no living author,” I stumbled, aware that my words were not reaching him. As they began to echo back, I intuited it was not a language barrier alone that they had struck.

“Then I read your books,” I continued, sounding less like an erudite reader and more like a lover pleading for him to stay, “and they were completely—transformative.”

I watched him dot a letter with what must have been a foreign accent mark.

He looked up. “This is nice,” he said in heavily accented English.

He had drawn a boundary between us. The cruel part about this transparent wall was not its deception but the fact that I could see past its protective properties into those deep pools, which seemed to shudder with the threat of an unwanted diver. Not a pebble of my language had gotten through, but there was a trembling beneath the surface that implied great depths, to which I, his reader! was denied entry.

To be fair, he had warned us. During the Q&A a young man had stood at the mic planted before the stage and asked this man how he tolerated the fact that all of us knew so much about him?

He’d answered that he could not live out what his work promised: brutal honesty, extreme vulnerability, revelation to the point of violence. He could barely live with his loved ones in such candor; how could he face a theater full of strangers—each of whom felt privy to the secrets of his soul?

How could he face a theater full of strangers—each of whom felt privy to the secrets of his soul?

Each of us in that signing line had an intense, resonant relationship with this man. But it was entirely unrequited.

“Blessed art that makes books,” wrote Ralph Waldo Emerson, “and so joins me to that stranger by this perfect railroad.” But in leaving the page, we’d gone horribly off the tracks, and now we were in the real world, where social barriers rule, defense mechanisms set in, and an individual protects themselves from the threat of excruciating criticism.

Our empathy had been extended, our hearts beat with his, but lagged behind by the several years it took for the book to be conceived, written, translated, and published. When I heard he’d divorced his second wife and was engaged to another woman, I’d just read about the birth of his child and his wife’s attempted suicide. How could he leave now? I cried, forgetting that for this man, that was four years ago and also, importantly: life, not literature. (And, more importantly: his life, not my bedtime reading.)

I’d puzzled over the distinction before. I was so enamored with Proust’s works that I often ignored the less palatable parts of his autobiography—the rumors of tortured rats and sadistic rituals—to enjoy the pleasures of our intimacy in a purely aesthetic world. It helped that Proust was dead, and therefore at the mercy of the reader’s imagination.

It helped, too, that Proust made a distinction between the life of an author and his work, however autobiographical. As a young man the narrator of In Search of Lost Time meets his favorite author, Bergotte. Expecting a “sweet singer with snowy locks,” he is dumbfounded to meet a common man with a little black beard and red nose.

“My preconceived ideas of him from his name troubled me far less than my familiarity with his work,” writes Proust, “to which I was obliged to attach, as to the cord of a balloon, the man with the little beard, without knowing whether it would still have the strength to raise him from the ground.”

In his 1968 essay “The Death of the Author,” Roland Barthes deftly clipped the tenuous string that attached a work of literature to its creator, leaving readers dancing on the ground, gazing up at the red speck floating just above our heads. According to Barthes, as soon as an author begins writing, “the voice loses its origin, the author enters into his own death.”

In severing the author from his work, Barthes is advocating for a certain approach to criticism. But where does that leave readers in signing lines? I reclaimed my book and stepped aside, watching as the next reader surreptitiously snapped a photo of her encounter.

When Proust’s narrator learns of certain vices attributed to Bergotte, he doesn’t allow them to undermine his works. To life’s problems, he hypothesizes, “the artist finds a solution in terms not of his own personal life but … a general, a literary solution.”

Perhaps readers and recipients of literature’s great solutions—those who indulge in flights of fancy and outright judgment as we leisurely take in another life—are not owed anything by the author. Maybe we sacrifice the opportunity to have our affections met by a living person when we enter into the author-reader contract: I, the reader, get to pour my impressions onto the character that you, the author, present to me in order to achieve the greatest sense of intimacy—of understanding and being understood, of having my own thoughts and experiences reflected in you. But when we close the cover, that’s it. We are offered a mirror only.

Perhaps readers and recipients of literature’s great solutions are not owed anything by the author.

Barthes’s point in killing off the author is to place the focus on the reader. “A text’s unity lies not in its origin but in its destination,” he writes. In other words, readers could stop craning necks toward the sky, or the signing table, and let that distant red speck float where it would.

Feeling the potential of connection in the man before me was maddening, but it wasn’t as if I was owed something, just because I’d made it through five volumes of his work. What had I offered in return, aside from my passionate adoration? If the author before me had placed a barrier between us, if the transparency I’d expected was not clear, open air but rather a solid windowpane, I could not complain. I left with another volume to consume; it was inscribed with an “e,” it was a gift, it was a looking glass.

What Experts Predict Will Unfold in the Future of Real Estate
China cuts quarantine time for international travelers in big step toward easing Covid controls
Drake’s YOLO Estate Sells
‘Top Gun: Maverick’ Catapults Past $1B At Worldwide Box Office – Update
La Brea Season 2 Teaser: Where the Hell Are We?