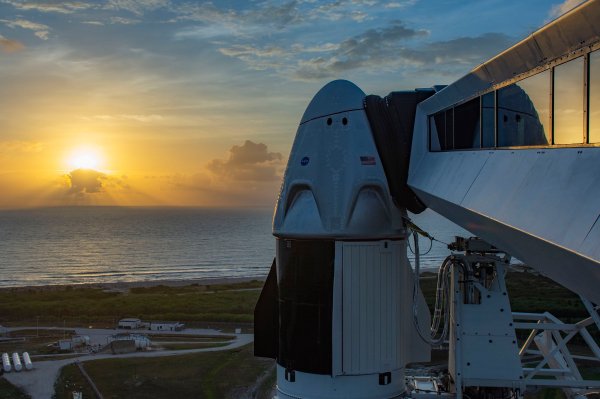 SpaceX is set to mark a huge milestone in its own company history, with a first-ever crewed spaceflight set to take off from Cape Canaveral in Florida later today. The mission is Commercial Crew Demo-2, the culmination of its Crew Dragon human spacecraft development program, which will carry NASA astronauts Doug Hurley and Bob Behnken to the International Space Station.

The launch is currently set to take off from Kennedy Space Center at 4:33 PM EDT (1:33 PM PDT), though that’ll depend on weather conditions. Those haven’t been looking too favorable over the past few days, but SpaceX and NASA have said they could make the call as late as around 45 minutes prior to the planned launch time about whether or not to delay. If today’s attempt is scrubbed, there are backup opportunities on the schedule for May 30 and May 31.

This will be the first ever crewed spaceflight for SpaceX, and it will also make history as the first U.S.-based human rocket launch since the end of the Space Shuttle program in 2011. NASA undertook the Commercial Crew program in 2010 to seek public-private partnerships to return its launch capabilities, eventually selecting both NASA and Boeing to design and develop spaceraft rated for human flight. SpaceX is the first from this program to make a crewed launch attempt.

The Demo-2 mission is actually essentially the final test phase of Crew Dragon, after which it and Falcon 9, the rocket which carries it to orbit, will be certified for regular operational use by NASA. That means it will begin offering regular transportation services for astronaut crew to and from the International Space Station, joining Russia’s Soyuz as a means to travel to the orbital science platform.

Meanwhile, SpaceX has already begun plans to also offer berths on Crew Dragon to private citizens and potentially commercial scientists and other passengers. That’s part of the reason behind the Commercial Crew program to begin with – NASA was seeking to lower cost of transportation for its astronauts to space by making seats available to other paying customers to offset launch and flight expenses.