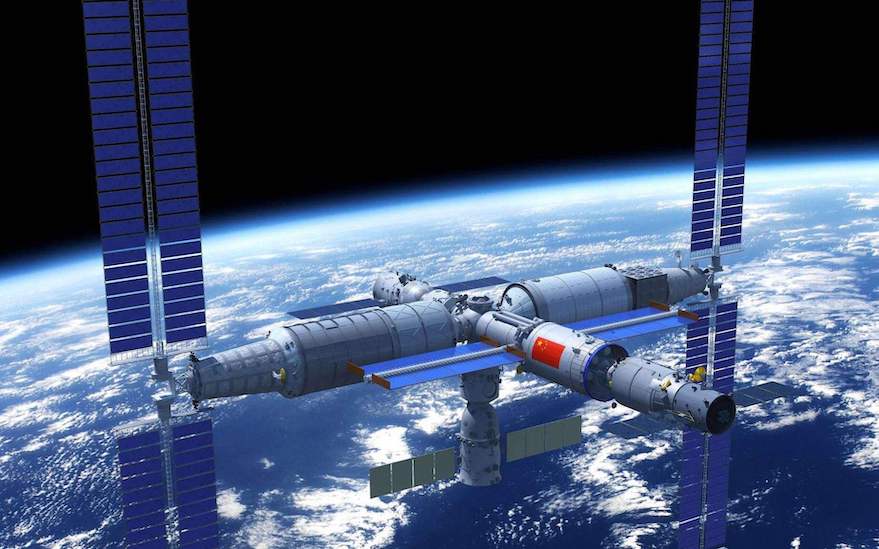 HELSINKI — China is preparing to carry out 11 missions in two years to construct a space station and will soon select a new batch of astronauts for the project.

The first module for the Chinese space station will launch next year, said Zhou Jianping, chief designer of China’s human spaceflight program, on the sidelines of a political conference in Beijing Tuesday.

Launch of the Tianhe core module on a Long March 5B could take place at Wenchang in early 2021. This will be followed by a crewed Shenzhou flight, from Jiuquan, and a Tianzhou cargo mission. The first of two experiment modules will then launch for docking with Tianhe.

In total 11 launches will be conducted to complete the construction of the space station by around 2023, Zhou said (Chinese). These will be the launch of the core and two experiment modules, as well as four crewed spacecraft and four cargo spacecraft.

The intensive launch plan was revealed following the successful test flight of the Long March 5B heavy-lift rocket May 5. The missions will be conducted using Long March 5B, Long March 2F and Long March 7 launch vehicles.

China will launch its Tianwen-1 Mars mission in July and Chang’e-5 lunar sample return in the fourth quarter before proceeding to launch the space station core module.

The outpost will orbit at between 340-450 kilometers for at least 10 years. Orbital inclination will be around 43 degrees to allow crewed launches to the station from Jiuquan in the Gobi Desert. The station could potentially be expanded to six modules, using apparent backup modules.

A co-orbiting two-metre-aperture space telescope will also be launched following completion of the basic station configuration. The ‘Xuntian’ optical module will be able to dock with the space station for maintenance and repairs.

“Its resolution ratio will be equivalent to the well-known Hubble telescope, but its field angle will be 300 times larger than the Hubble telescope. With it, we can finish the survey of large areas in space in 10 years,” said Zhou earlier this month.

A third batch of astronauts will be selected in July, astronaut Wang Yaping told press May 24 (Chinese).

Up to 18 new astronauts, including men and women, will be drawn from the People’s Liberation Army Air Force and, for the first time, civilians with science and engineering backgrounds, according to previous announcements. The latter are expected to bring expertise and efficiency to science tasks.

Wang in 2013 became China’s second woman astronaut in space. The Shenzhou 10 mission veteran said she is looking forward to receiving new teammates and assisting their training.

The new selection round follows two previous selections in the 1990s and 2010. The current astronauts have been undergoing neutral buoyancy training in preparation for space station missions and extra vehicular activity.

Opening of a new round of astronaut selection was first announced in 2017. However, the failure of the second Long March 5 in July that year postponed the space station project.

The Long March 5B designed to launch station modules had a successful first flight May 5. This followed the requisite December return-to-flight of the Long March 5, which was grounded for more than 900 days.

The Long March 5B inaugural flight tested a variant of a new-generation crew spacecraft. The low Earth orbit variant will be capable of ferrying six astronauts, or three astronauts and 500 kilograms of cargo, to the space station.

The partially reusable craft could eventually replace the smaller Shenzhou as the main means of transport to the space station.