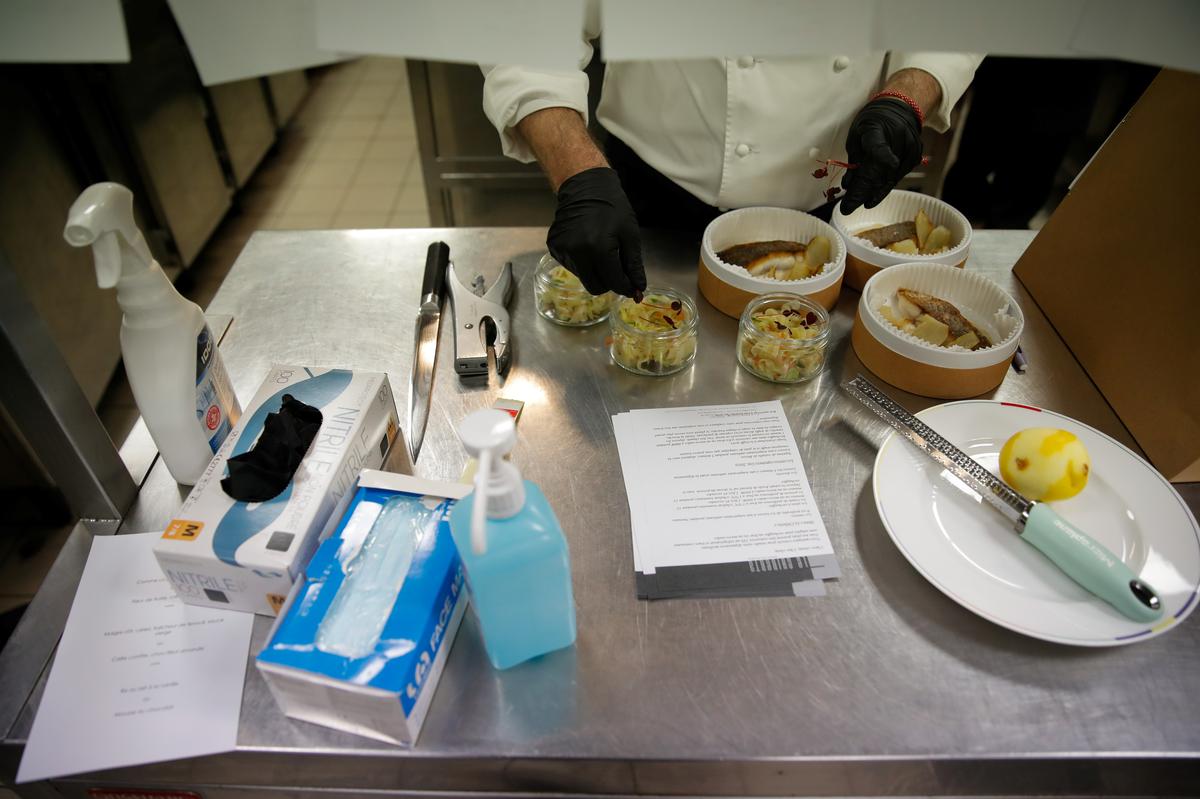 Chef Gilles Chesneau prepares takeaway menus at Michelin-starred restaurant Le Chiberta in Paris before the announcement by the French government of more easing lockdown measures to allow the reopening of restaurants as soon as possible following the outbreak of the coronavirus disease (COVID-19) in France, May 27, 2020. REUTERS/Gonzalo Fuentes

PARIS (Reuters) – It’s not your typical takeout menu, even in Paris: raw trout in a sour cream followed by quail confit with a cauliflower and almond sauce. Then again, in normal times three-star Michelin chef Guy Savoy doesn’t do delivery.

One of the world’s most celebrated chefs, Savoy opened one of his four Paris restaurants, Le Chiberta near the Arc de Triomphe, for takeaway after France partially relaxed some coronavirus lockdown restrictions earlier this month.

“We wanted to do this to show people that we’re still here, still here to help them keep up their spirits,” said Gilles Chesneau, executive chef at Savoy’s restaurants.

On the abbreviated three-course menu are simplified takes on some of Savoy’s signature dishes. While the set menu’s fixed price of 55 euros may for some be eye-wateringly expensive compared to regular takeout fare, it is for others an affordable way to discover the culinary touch of a masterchef.

Le Chiberta is delivering about 35 meals a day, Chesneau said, and will continue doing so even after the 70-cover restaurant reopens to compensate for the reduced seating.

“It’s tough for restaurants right now,” said legal secretary Pauline Bakomera as she bought one of Savoy’s meals for a client.

France tiptoed out of lockdown on May 11, allowing schools to slowly reopen and shops and manufacturing plants to resume operations. But it kept restaurants, cafes and bars closed.

Prime Minister Edouard Philippe will announce measures to further unwind the lockdown on Thursday. Restaurants across the country on Wednesday dressed empty tables in an appeal to government to revive the struggling industry.

“We’ve got to get things up and running,” said Chesneau. “Otherwise it’s not the virus that will kill us but the economy.”