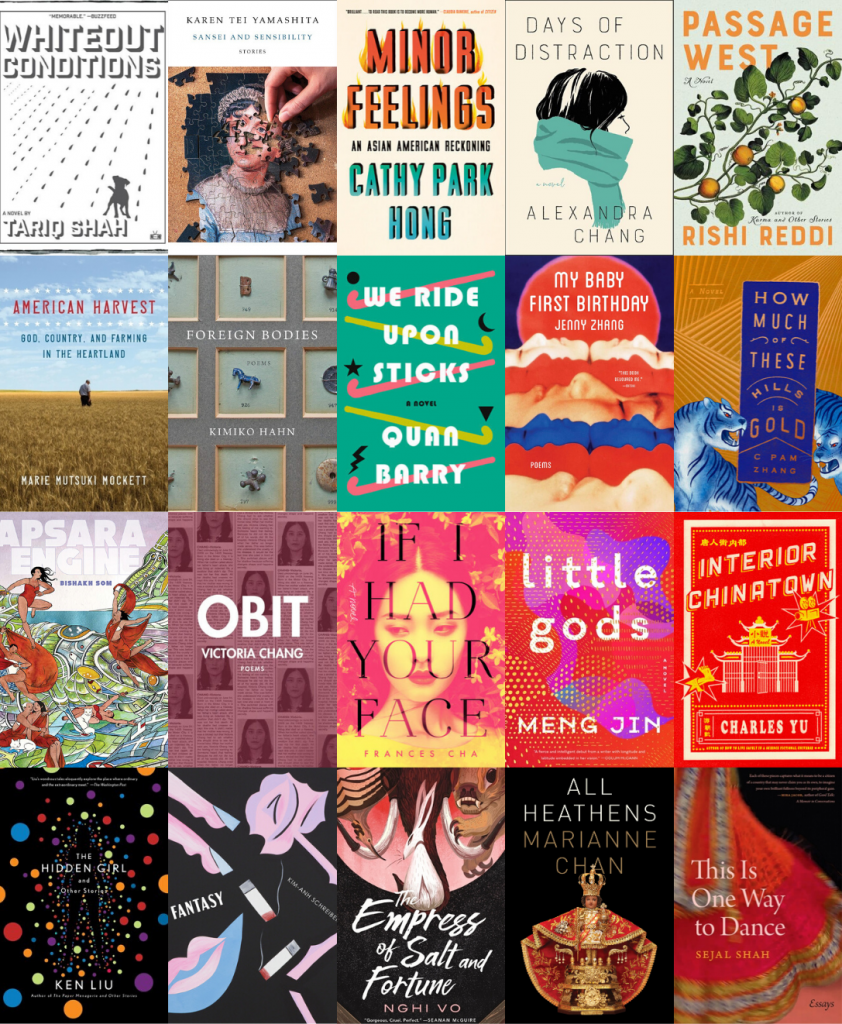 It’s been just over 45 years since the publication of Aiiieeeee!, a groundbreaking and trailblazing anthology that established the category of Asian American literature. Since then, we’ve seen the amalgamation of great organizations centering around Asian American Pacific Islander literature, like the Asian American Writers’ Workshop, Kearny Street Workshop, Kundiman, and more.

It’s Asian and Pacific Islander American Heritage month (We get a WHOLE month!) and one of the few comforts I’ve found in this time is catching up on titles that have been stacking up in my room. Curating this list of twenty books by Asian American writers published in the first half of 2020 was the best way to commemorate literature that celebrates our existence, our voices, and our stories.

Korean American poet Cathy Park Hong’s much anticipated collection of essays turns the inherent self-consciousness that many Asian Americans feel into scintillating accounts of cultural criticism. Hong tackles the mental and physical repercussions of “a society who thinks [she’s] as interchangeable as lint” through personal anecdotes filled with humor, introspection, and poetry. Read an interview with Cathy Park Hong on what it means to experience racism and have your experience dismissed.

Days of Distraction by Alexandra Chang

Feeling stuck in her job as a tech writer and feeling like she’s in the shadow of her Ph.D. candidate boyfriend, narrator Jing Jing plots her escape. Seeking answers in her life, she struggles with her interracial relationship and millennial disillusionment, among other problems. Written in fragments and reminiscent of Weike Wang’s novel Chemistry, Days of Distraction follows Jing Jing’s struggle to reconnect with her family’s past as she leaves her new life behind. Read an interview with Alexandra Chang on respectability politics and being underestimated here.

All Heathens by Marianne Chan

Catholicism, colonialism, and karaoke: these subjects, along with poems dedicated to Antonio Pigafetta and jet lag, are at the center of Marianne Chan’s debut poetry collection. Chen Chen writes, “Alive on every page, this book is a song that refuses to sing of anything less than the true, the piercing and true.”

We Ride Upon Sticks by Quan Barry

The infamous Danvers, Massachusetts is the setting for this novel taking place in a high school in 1989. Abby Putnam, a descendant of Salem witch accuser Ann Putnam, is a captain of the Danvers High School Falcons field hockey team. With her co-captain and team, they conspire a witchy plan to be number one in the state.

An ode to “being baby,” Jenny Zhang’s newest poetry collection uncovers growing pains, innocence, friendship, and tenderness. The poems cycle through the four seasons with the narrator’s concept of being loved unconditionally changing constantly. Zhang includes criticism of climate change, texts with friends, and “goo goo” talk in this cathartic collection. Jenny Zhang explains why we want to be baby here.

The Hidden Girl and Other Stories by Ken Liu

Typical American science fiction doesn’t usually center on the trauma of the Japanese American survivors of the internment camps or take place in Tang dynasty China, but such is the case for Ken Liu’s second short story collection. Following his 2016 collection, The Paper Menagerie and Other Stories, Liu presents more personal narratives; however, he doesn’t spare the aliens and the threat of artificial intelligence in these stories.

The roots of immigration in California run deep in this novel about a Punjabi migrant who comes to work in the Imperial Valley, near the U.S.-Mexico border in order to support his family back home. Rishi Reddi takes the real histories of sharecroppers emigrating from India, Mexico, and Japan to the West Coast during the dawn of Mexican Revolution and World War II to create a century-long story of love and belonging. Passage West brings to light the histories of migrant workers and people of color whose hard labor helped build California.

The Empress of Salt and Fortune by Nghi Vo

Gender roles in Imperial China are challenged when two women from very different backgrounds come together. A young royal, In-Yo, and a handmaiden named Rabbit form an unlikely bond amid political complications between Northern and Southern China. Vo’s novel offers a refreshing cast of queer-friendly characters and is told in flashbacks by an older Rabbit to a nonbinary character named Chih.

How Much of These Hills Is Gold by C Pam Zhang

Two newly orphaned siblings unite to bury their father in the California Hills during the Gold Rush. The book’s epigraph, “This land is not your land,” is a constant reminder for these children of immigrants, as they face adversity from miners. This American tale, akin to the novels of Steinbeck and Faulkner, reexamines the role of wanderer and explorer.

Taiwanese American writer Charles Yu has written for popular American TV shows, such as Westworld, Here and Now, and Legion. His sophomore novel, Interior Chinatown, is written in a screenplay format, naturally, and is led by “Generic Asian Man” actor Willis Wu. The role of protagonist is thoroughly questioned as Willis starts feeling like he’s not even the main character in his own life.

“Funerals are kind of fun, yes. I’ve cultivated a taste. It’s become a kind of social pursuit. It was a kink, of a kind,” says narrator Ant when he has to return home after a death in his family. At just over 100 pages, Tariq Shah takes the wintry Chicago gloom and funeral procession of a Muslim American family and churns out a dazzling narrative about loss, coping mechanisms, and vengeance.

Meng Jin’s first novel is a multigenerational story flooded with ghosts and violence. Down the family tree line is Liya, who is 17 when her mother, Su Lan, dies. Liya ventures to China with her ashes to understand her mother’s past, gain more insight on physics, and find out to who or where she belongs. We see Su Lan through the perspectives of those who were closest to her when she was alive. Read an interview with Meng Jin about motherhood, immigration, and running away from the past.

This Is One Way to Dance by Sejal Shah

This Is One Way to Dance is a debut memoir exploring the Indian American identity. Sejal Shah, the daughter of Gujarati parents born in India and East Africa, writes lyrically about race, culture, and class disparity in this collection of essays.

Karen Tei Yamashita is one of the masters of American magical realism. Her latest book takes us from Kyoto to Brazil and recontextualizes Jane Austen characters into a contemporary high school setting. Working in a variety of genres and languages, she delivers nuanced and refreshing perspectives in these stories highlighting the Japanese American experience.

This experimental novel weaves the intergenerational story of Vietnamese women with scenes from House, a 1977 Japanese comedy-horror film by Nobuhiko Obayashi. A playwright, Kim-Anh Schreiber is fearlessly funny and intuitive in her first book that explores the projections of beauty standards placed on women.

Marie Mutsuki Mockett, a native of Carmel, California, makes the trek to her father’s home state of Nebraska. Upon inheriting her father’s land of wheat fields, she follows a group of evangelical farmers who cared for her family’s farm. American Harvest is her story of assimilating into rural life by going to church services, working in the field, and understanding her identity as a biracial American woman.

If I Had Your Face by Frances Cha

Four women in modern-day Seoul have unique ambitions in the ever-changing city; their problems, however, are quite familiar to those who understand the demands of intense beauty standards. The young women strive to advance their careers, meet dreamy boy band stars, and start families in Cha’s debut.

After a visit to the Mütter Museum in Philadelphia, Kimiko Hahn left with the idea for Foreign Bodies, inspired by American laryngologist Dr. Chevalier Quixote Jackson’s collection of body parts he extracted from his patients. Hahn’s tenth book of poetry is a reminder of the beauty of found objects in the home, which we all could learn a lesson from in this time.

Victoria Chang’s title is a contraction of the word, “obituary.” Written after the death of her mother, Chang includes “obits” of herself, as she dissects grief by acknowledging mortality and the “smaller deaths” that come with loss and mourning. Read an interview with Victoria Chang about creating a world in which everything that dies is mourned here.

Meta’s ‘Year of Efficiency’ was everything Wall Street needed to hear from Zuckerberg
Here’s where the jobs are for January 2023 — in one chart
Beyoncé Disco Ball Cowboy Hat Sells Out, Etsy Shop Bombarded With Orders
American Gigolo: No Season Two; Showtime Drama Series Cancelled
‘The Phantom Of The Opera’ Tops Broadway Box Office; ‘The Piano Lesson’ Closes On High Note