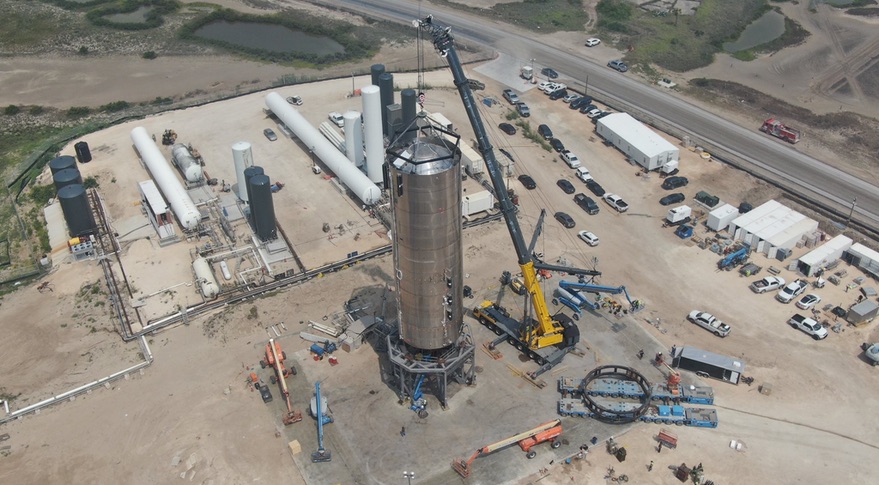 WASHINGTON — SpaceX has received a license from the Federal Aviation Administration allowing the company to carry out suborbital flight tests of its Starship next-generation launch vehicle.

The FAA’s Office of Commercial Space Transportation published the launch license May 28 for what it calls the Starship Prototype Launch Vehicle. The license allows SpaceX to conduct suborbital flights of the vehicle from its test facility in Boca Chica, Texas, near Brownsville.

SpaceX has been conducting a series of static-fire tests of the latest Starship prototype, called SN4, including one May 28. The company has not formally announced when it will attempt an initial “hop” test of that vehicle.

There is a temporary flight restriction for the airspace above that test site for June 1, from 7 a.m. to 3 p.m. Eastern, restricting airspace up to an altitude of 26,000 feet (7,925 meters), suggesting SpaceX may attempt a low-altitude free flight of the vehicle then. Similar restrictions have been filed in the past and then canceled, however. Flight restrictions have also been used for static-fire tests, but to much lower altitudes.

Any sort of flight test of Starship would require either a launch license or a less restrictive experimental permit from the FAA. A previous prototype vehicle, Starhopper, had a permit from the FAA, which allowed it to carry out a single flight in August 2019 to an altitude of about 150 meters, landing on a nearby pad at the Boca Chica site about a minute after liftoff.

The conditions of that permit, though, limited SpaceX to just a single Starhopper flight to that altitude. By contrast, the launch license for Starship places no overt restrictions on the number of flights or their altitude, beyond being suborbital flights that both take off and land at Boca Chica. The vehicle must follow the “ground track and trajectory presented in the license application,” but those details, along with the application itself, are not disclosed.

Musk, at a September 2019 event unveiling an earlier prototype of Starship, said he didn’t envision difficulties getting the FAA license despite the months of work needed to amend the Starhopper permit to allow just a single 150-meter hop. “I feel pretty optimistic about things. I don’t see any fundamental obstacles,” he said of the licensing process.

That event showed off what the company called the Starship Mark 1 vehicle, which Musk promised would soon fly. “This thing is going to take off, fly to 65,000 feet, about 20 kilometers, and come back and land, in about one or two months,” he said then.

Instead, the Mark 1 vehicle was destroyed in a tank pressurization test in November. A second prototype, called SN1, suffered the same fate in a similar test Feb. 28. After stripping down the SN2 vehicle to its tanks for testing, a third prototype, SN3, crumpled in an April 3 test, apparently because of a misconfigured test setup.

The latest vehicle, SN4, passed its pressurization test April 27 and has since performed several static-fire tests using a single Raptor engine installed in its base. Musk has suggested in recent comments, including an Aviation Week interview, that the first hop test might be a “few weeks” away as the company focuses on the launch of the Demo-2 commercial crew mission.

Why desalination won’t save states dependent on Colorado River water
Cancellations Come As Showtime To Become Paramount+ With Showtime in Consolidation, Rebrand
How ‘Skinamarink’ made $1.5 million on a $15,000 budget
A Complete Timeline of Rihanna and A$AP Rocky’s Relationship
M. Night Shyamalan’s ‘Knock At The Cabin’ To Knock ‘Avatar 2’ Out Of No. 1 Spot – Box Office Preview