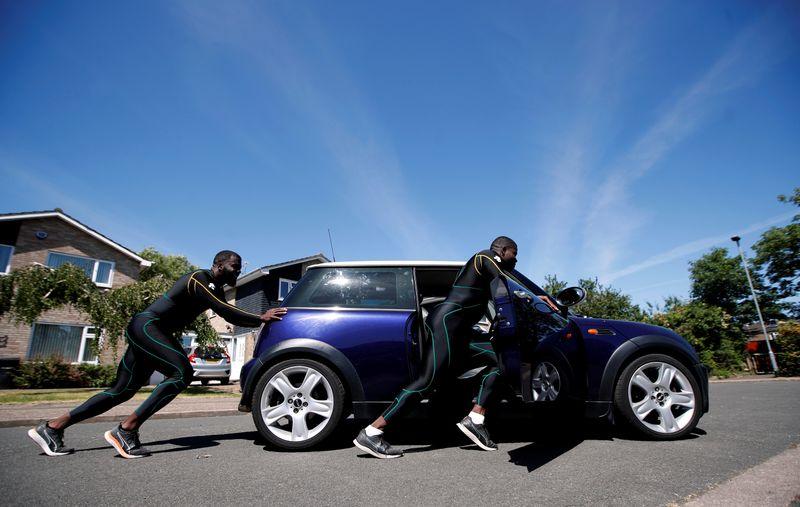 PETERBOROUGH, England (Reuters) – The Jamaican bobsleigh team is used to training without snow, but the coronavirus lockdown has seen its male athletes resort to pushing a car around the streets of an English city to stay in shape, with an eye on Olympic qualification.

Bobsleigh – Jamaica Bobsleigh team members Shanwayne Stephens and Nimroy Turgott push a Mini Cooper. They have been pushing the car around the streets of Peterborough as part of their training following the outbreak of the coronavirus disease (COVID-19), Peterborough, Britain, May 29, 2020. REUTERS/Paul Childs

Some residents of Peterborough have offered their help to Shanwayne Stephens and Nimroy Turgott as they push a Mini down the road, before realising it is part of a new training regime to work around the closure of gyms in England.

“We had to come up with our own ways of replicating the sort of pushing we need to do. So that’s why we thought: why not go out and push the car?” Stephens, 29, told Reuters.

“We do get some funny looks. We’ve had people run over, thinking the car’s broken down, trying to help us bump-start the car. When we tell them we’re the Jamaica bobsleigh team, the direction is totally different, and they’re very excited.”

The couple said they had been inspired by the 1988 Calgary Winter Olympics men’s bobsleigh team, immortalised in the 1993 film Cool Runnings.

But they said they aimed to qualify for the Beijing Winter Olympics in 2022 and then outperform the 1988 team, who did not officially finish the four-man bob competition after crashing.

“Those guys set a legacy, and a movie came out of it. For me personally, I want to surpass that level, and even go beyond that,” Turgott, 27, said.

Turgott, who normally lives in Jamaica, has been staying with Stephens since January, and the pair had always planned to do summer training in Britain, albeit in gyms rather than on roads.

“If you’re able to do the same sort of training without the same equipment, then you should be able to achieve more with the right equipment,” he said.

The pair are focused on qualifying for Beijing 2022. While the woman’s team competed for the first time in 2018 in Pyeongchang, South Korea, the men’s team failed to qualify.

“The last Olympics, we missed it by one slot. And now we are using that experience as our motivation moving forward,” Turgott said.