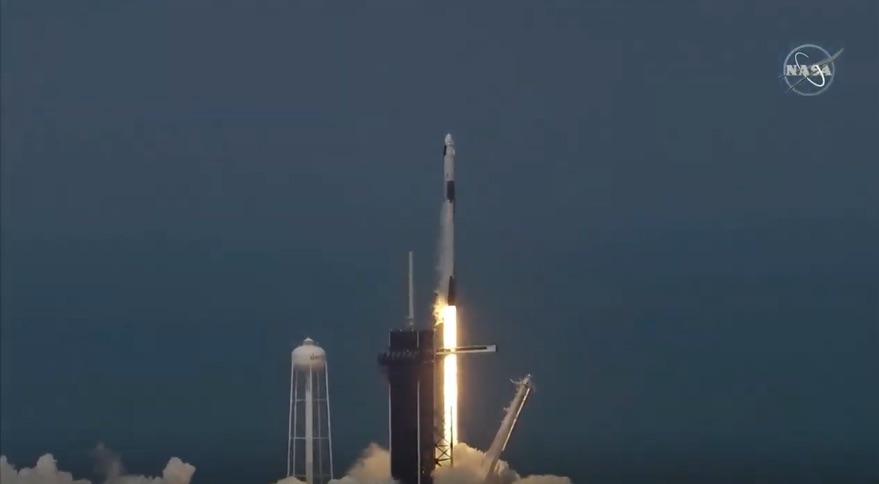 WASHINGTON — The first crewed orbital launch from the United States in nearly nine years took place May 30, placing a SpaceX Crew Dragon spacecraft with two NASA astronauts on board into orbit, bound for the International Space Station.

A Falcon 9 rocket lifted off from Launch Complex 39A at the Kennedy Space Center at 3:22 p.m. Eastern. The Crew Dragon spacecraft atop the rocket’s upper stage separated 12 minutes later after achieving low Earth orbit.

The launch took place on the second attempt for the Demo-2 mission, after the first attempt May 27 was scrubbed less than 20 minutes before the scheduled liftoff because of inclement weather. Weather for this attempt was unsettled for much of the day, with only a 50% chance of acceptable weather in the hours leading up to liftoff. Conditions improved, though, through the afternoon, allowing the launch to proceed.

The Crew Dragon is scheduled to dock with the ISS at about 10:29 a.m. Eastern May 31, 19 hours after launch. After docking, Bob Behnken and Doug Hurley will remain on the station for up to four months to assist the one NASA astronaut currently on the station, Chris Cassidy, while the next Crew Dragon is prepared for a launch now scheduled for no earlier than Aug. 30.

The launch is the culmination of an effort that dates back more than a decade to develop a successor to the space shuttle for transporting NASA astronauts. The Commercial Orbital Transportation Services (COTS) program, started by NASA in 2005, supported the development of commercial cargo vehicles, including the original SpaceX Dragon spacecraft. The COTS program included an option for crew transportation, but NASA did not exercise that part of its award to SpaceX.

NASA then started the commercial crew program in 2010 with a series of funded Space Act Agreement initiatives to SpaceX and other companies. In 2014, Boeing and SpaceX won Commercial Crew Transportation Capability (CCtCap) contracts to complete development and testing of their commercial crew vehicles and for initial flights to the ISS. SpaceX’s award was worth $2.6 billion.

At the time of the CCtCap awards, NASA expected to have the spacecraft completed and certified for flying NASA astronauts by 2017. But development delays pushed back the schedule for both companies, exacerbating earlier delays in the program caused by funding shortfalls.

SpaceX flew the Crew Dragon spacecraft for the first time in March 2019 on the Demo-1 mission, going to the ISS without a crew on board. That flight was a success, but a little more than a month after the Demo-1 spacecraft splashed down, it was destroyed during a static-fire test of the SuperDraco thrusters in its launch abort system.

That accident pushed back an in-flight abort test of the spacecraft, where the capsule separated from a Falcon 9 rocket in flight, to January. That test was a success, and final testing of the spacecraft, including its revamped parachute system, cleared the way to proceed with the Demo-2 crewed mission.

Behnken and Hurley both joined the NASA astronaut corps in 2000. Behnken flew on the STS-123 shuttle mission in 2008 and STS-130 in 2010. Hurley flew on STS-127 in 2009 and STS-135, the final space shuttle flight, in 2011. The two joined the commercial crew “cadre” of astronauts in 2015 to train on both the Crew Dragon and Boeing’s CST-100 Starliner vehicles, providing inputs from an astronaut’s perspective for both companies.

“This is a great time in America to be able to do this again,” Hurley said in comments May 20 when he and Behnken arrived at KSC for the launch, calling the development of commercial crew vehicles a “marathon” by NASA and SpaceX. “I think it’s kind of a culmination. It’s that next stage of human spaceflight.”