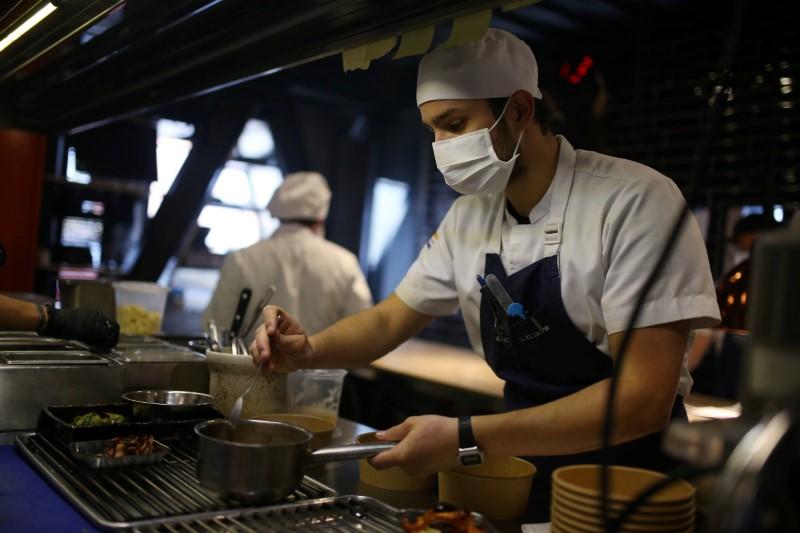 BOGOTA (Reuters) – In the bustling kitchen of one of Bogota’s trendiest restaurants, a team of chefs that usually caters to the Colombian capital’s well-heeled citizens is preparing meals for a community of people cut off from work and housing during the Andean country’s coronavirus quarantine.

A nationwide lockdown declared by the government of President Ivan Duque to curb the spread of the novel coronavirus has cratered Colombia’s economy and particularly hurt its poor and vulnerable, who must make do without their usual informal jobs.

Now, two restaurants – El Chato, run by chef Alvaro Clavijo and winner of Colombia’s best restaurant award in 2019 from Latin America’s 50 Best Restaurants, and Chicheria Demente, have teamed up to bring nutritious meals to people renting beds by the day in central Bogota.

“A lot of the food we take to the lodging isn’t what they’re used to,” Clavijo said. “We’ve been taking them on a discovery.”

Some 48 people live in the austere building, paying about $2.70 per day for a room, or $1.35 for a bunk bed. Many are informal workers who have seen their incomes plummet under quarantine.

Chefs from the two restaurants take turns preparing meals before delivering them and also donate other food. The initiative has received donations worth close to $6,000.

“We take them different things, a daily meal, eggs so they have something else during the day, sometimes rice, sometimes water,” said Natalia Carreno, one of the partners at Chicheria Demente.

Colombia entered the nationwide quarantine in late March. While restrictions have begun gradually lifting in some places, Bogota’s high infection rate has meant the city continues to observe stricter protocols.

The meals are a lifeline for residents, who did not leave the building for the first 40 days of quarantine.

“I’m very grateful to them,” said Miryam Tellez, who helps run the house. “They have always come, they have never left us alone.”