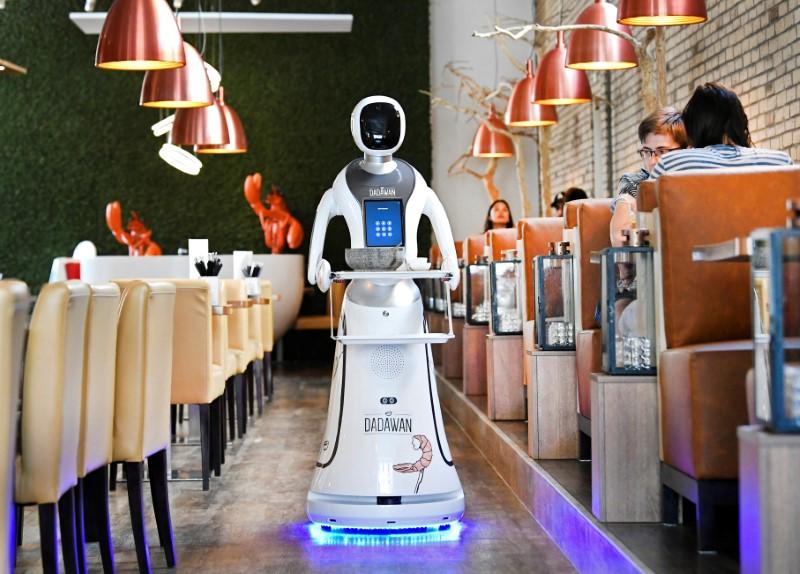 MAASTRICHT, Netherlands (Reuters) – At the Dadawan restaurant in the southern Dutch city of Maastricht, an unusual group of new staffers has been brought in to help after the Netherlands eased its coronavirus lockdown this week: robots.

A robotic trio of waiters named Amy, Aker and James roll back and forth from the bar at the Asian fusion restaurant, handing out drinks — and lessening the number of trips that human staff need to make through the restaurant.

Each robot has a simple humanoid figure, including arms to hold serving trays. Simple displays on their faces shows a smile, or occasionally a frown.

The service can be a bit stiff.

“Hi, here is your order. Please take it away from the tray. I will go back automatically in 20 seconds”, Amy informs a pair of women seated at a booth, after presenting them with two glasses of ice tea.

Customers must pick up their own drinks.

Though robotic servers were introduced in China several years ago and have since become a novelty at restaurants around the world, only a handful of Dutch eateries have so far introduced them.

For now, Dadawan’s robo-service is limited to drink delivery, but the owner hopes to quickly widen their repertoire.

Restaurant representative Paul Seijben said waiters’ jobs are not threatened by the newcomers.

“Our team is actually really happy with the robots”, Seijben said.

Staff, who wear face masks, load drinks onto the trays, press a table number, then stand back as the robot rolls away.

Restaurants in the Netherlands were closed from mid-March to June 1 for everything but take out and delivery. Since Monday, restaurants have been allowed to receive up to 30 people with a minimum distance of 1.5 metres (5 ft) between tables. Diners must make an appointment in advance.

Microscale structure of rock affects microseismicity at underground carbon dioxide storage site
Post-pandemic travelers visited these 10 countries the most in 2022
Jennifer Lopez Tells All About Falling In Love With Ben Affleck and Their Breakup Sending Her on a ‘Spiral’
‘Top Gun: Maverick’ Flying Back To Theaters
Eating Well Is a Portal Into Proust’s “In Search of Lost Time”