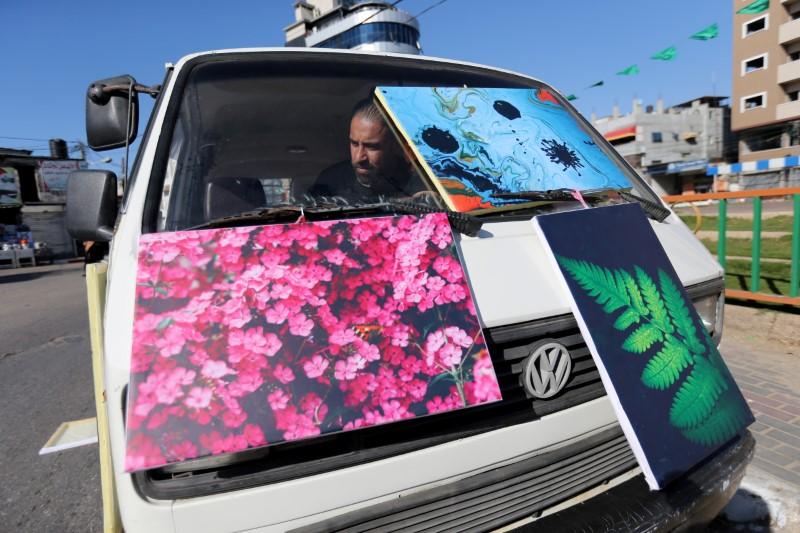 GAZA (Reuters) – Every day Ammar Abu Shamalla adds a little colour to drab routine life in Gaza, loading up his camper van with pictures he displays and sells in the Palestinian territory’s streets and markets.

He and wife Arwa, both jobless college graduates, did painting in their spare time before coming up with the idea of putting their hobby to more productive use.

“We wanted to display our paintings to the public in vital places… Amid the coronavirus, we also wanted to make living,” he told Reuters.

There are no art galleries in the territory, run by the Islamist Hamas group since 2007.

However, some private and public institutions hosted exhibitions before the start of the epidemic, which has infected 69 and led to one death there.

Depicting mainly landscapes, flowers or portraits, Abu and Arwa’s paintings hang off the sides of the van, and he brings out more from inside once he has parked it and crowds gather.

Three other local artists are also partners in the project and over the past few weeks the couple say they have sold about 200 for between $4 and $10 each – comparatively large sums in a sealed-off community where the unemployment rate is around 50%.

Jim Chanos: Bear market is doing something unheard of in my career
Satellite billed as the ‘future GPS’ begins key tests
15 Types Of Chains For Men and How You Should Wear Them in 2023
‘Fear’, ‘Infinity Pool’, ‘Skinamarink’ Scare Up Cash In Indie Horror Bonanza – Specialty Box Office
Kate Middleton Spices Up Her Royal Wardrobe in a Plunging Wrap Blazer