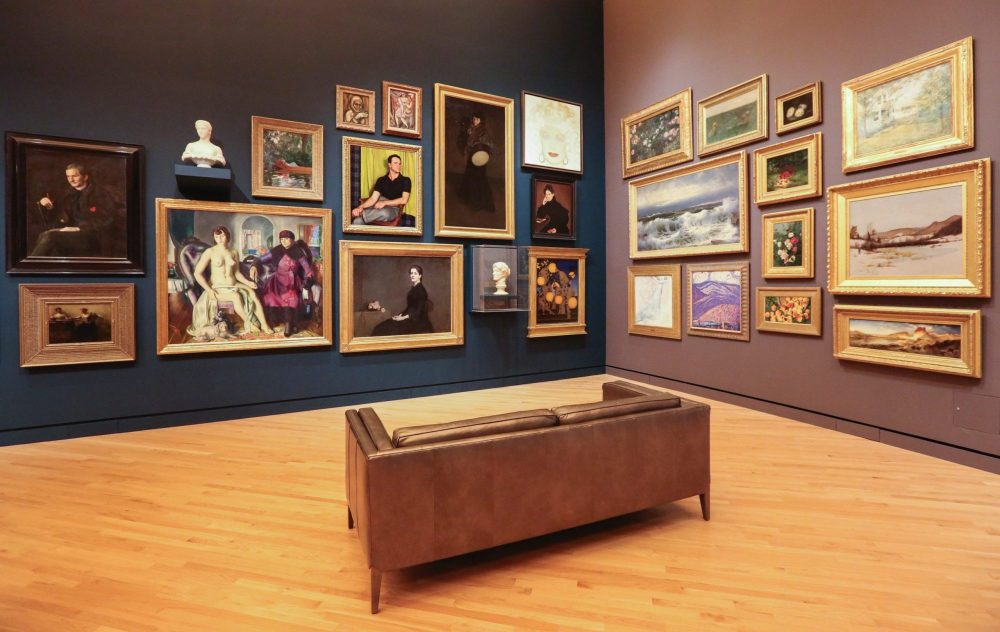 Museums are a lot like libraries and bookstores: quiet, contemplative spaces filled with wondrous objects that can light up your imagination and transport you to a different time and place. Now, like so many other cultural institutions amid the COVID-19 pandemic, most are shuttered for the time being. By one estimate, about a third of museums in the United States may never reopen.

Still, some—like Amsterdam’s Rijksmuseum and the Getty Museum in Los Angeles—have taken to social media to creatively engage quarantined audiences with challenges like #BetweenArtAndQuarantine, in which members of the public recreate works of art using whatever they happen to have lying around at home (incorporating toilet paper rolls seems to be especially popular). The Metropolitan Museum of Art in New York City recently launched the #MetMaskChallenge, encouraging followers to design masks incorporating artwork from the collections to wear once it is safe to reopen, “because why not wear the art while you look at the art?”

If you find yourself longing to escape to the halls of a museum during these days of confinement, consider cracking open one of the following books about real and fictional collections.

First up is New York City’s Metropolitan Museum of Art, housing over 5,000 years worth of global art in its Fifth Avenue building, which spans four city blocks. Of course, the Met features in such classic novels as E. L. Konigsburg’s From the Mixed-Up Files of Mrs. Basil E. Frankweiler and Donna Tartt’s The Goldfinch. But here’s one you may not have heard of yet.

In Metropolitan Stories: A Novel, Christine Coulson — who worked at the Met for over 25 years — breathes magical life into the collections, giving voice to the art itself. The Duchess of Parma’s fauteuil chair craves a support group of other chairs with whom she can share stories of the family who once owned her, her lonely times in storage, and how she aches for the long-lost touch of human beings on her fabric and frame. When the museum’s director requires a muse to sit in on his meeting with Karl Lagerfeld, the curatorial departments dispatch headless stone graces and nineteenth century oil portraits to shuffle awkwardly to his office for inspection. The staff think they are protecting and studying the artworks while the artworks think they are protecting and studying the staff.

Coulson takes lovers of the Met — and those who have yet to discover its wonders in person — behind the scenes, diving deep into the special magic of this iconic institution.

Meet Me at the Museum by Anne Youngson

Next up is the Silkeborg Museum in Denmark. In Anne Youngson’s gentle epistolary novel, an English farm wife in her sixties, trapped in a loveless marriage, begins a correspondence with the museum’s curator, himself a lonely widower. Tina Hopgood has long dreamed of visiting the Silkeborg Museum, where Tolland Man — an early Iron Age bog body with an unusually well-preserved face — is displayed. Curator Anders Larsen encourages her to finally make the trip. The two exchange letters and emails, reflecting on whether they have lived the lives they meant to, until surprising revelations leave Tina with big decisions to make.

The Octopus Museum by Brenda Shaughnessy

Our third museum is fictional, though at the rate 2020 is going, is it so outlandish to imagine that the earth might soon be ruled by semi-benevolent octopus overlords with museums dedicated to the study of humanity? Could it hurt to start preparing, just in case? Shaughnessy’s poetry collection takes place in a world of ever-unfolding climate apocalypse caused by humans, with Octopodes reigning over us all. The table of contents is framed as a Visitor’s Guide to the Octopus Museum’s five exhibits about humans: The Gallery of a Dreaming Species; Special Collection: “As They Were”; “To Serve Man”: Rituals of the Late Anthropocene Colony; Found Objects / Lost Subjects: A Retrospective; and Permanent Collection: Archive of Pre-Existing Conditions.

The Museum of Innocence by Orhan Pamuk

Now to Istanbul, where tucked near the main shopping thoroughfare of İstiklal Street is the Museum of Innocence. This real life museum was conceived and developed by the Nobel Prize winning writer Orhan Pamuk as a companion project to his novel by the same name. In the book Kemal, the son of a wealthy Istanbul family, falls for his beautiful but distant cousin Füsun, a poor shop girl. He pursues her even as his engagement to another woman falls apart as a result and the two are briefly lovers, though Füsun remains his unrequited love much longer. After she marries another man, Kemal becomes a frequent visitor at their house, each time stealing an object to add to his collection commemorating their brief affair. Through his “museum” Kemal seeks to regain a closeness that he will never achieve with the actual person.

The real life museum is filled with objects that the characters in the novel would have interacted with, evoking Istanbul life in the 1970’s. Display cases correspond to chapters in the book and Pamuk himself narrates the audio guide. The museum’s website states: “It is not essential to have read the book in order to enjoy the museum, just as it is not necessary to have visited the museum in order to fully enjoy the book. But those who have read the novel will better grasp the many connotations of the museum, and those who have visited the museum will discover many nuances they had missed when reading the book.”

Maggie Richter, the protagonist of this smart literary mystery/thriller, is an in-house editor at the fictional Rocque Museum in Los Angeles, whose boyfriend recently left her for provocative artist Kim Lord. Lord’s upcoming exhibit “Still Lives” features gruesome self-portraits of the artist recreating media images of famous murdered women. Though meant as a commentary on our culture’s fetishization of violence against women (especially beautiful women), some including Maggie see the work as glorifying that same violence and allowing the artist to capitalize off the victimization of others. When Lord goes missing on opening night, Maggie feels compelled to investigate and disprove the police’s theory that her ex is to blame.

The Barnum Museum by Steven Millhauser

Next up is the Barnum Museum in Bridgeport, CT, or at least the highly fictionalized version it inspired. This story collection was originally published in 1990 by Steven Millhauser, who would go on to win the Pulitzer Prize in 1997 for his novel Martin Dressler: The Tale of an American Dreamer. Millhauser used to visit the Barnum Museum, founded by P. T. Barnum of “The Greatest Show on Earth” 19th-century circus fame, as a child in the 1950’s and clearly it made an impression. He set out to write about an impossibly large museum full of dubious things. The museum in the collection’s title story goes on forever, eventually swallowing Bridgeport and all of its residents. Each story in the collection can also be seen as an “exhibit” featuring a different experimental writing technique.

Rohan at the Louvre by Hirohiko Araki

Now to Paris and the Louvre Museum, by way of Japan. Teenaged Rohan is an aspiring manga artist when a seemingly disturbed tenant at his grandmother’s boarding house tells him of an evil, centuries old painting. She also destroys one of his works that features an image of her. A decade later, Rohan travels to Paris and finds the painting in a closed wing of the Louvre, unprepared for the power of the curse he unleashes by doing so. Rohan is a recurring character in Hirohiko Araki’s Jojo’s Bizarre Adventure series, and stars in this graphic novel, which is itself one of a series by different authors commissioned and published by the Louvre Museum.

Our next museum is another fictional one, haunted this time. Its strange curator is in love with the ghost of an artist, while the daughter of the museum’s founders has disappeared under mysterious circumstances at sea. It is told in part through increasingly long and strange museum tags, in part through the musings of an elderly town resident who finds unexpected connections between the exhibits and her own past, though her thoughts on death and loss are at odds with the curator’s.

The Museum of Modern Love by Heather Rose

Once more to New York City, this time to the MoMA. Heather Rose’s novel is based on the real life performance of Serbian artist Marina Abramović at the Museum of Modern Art in 2010. Abramović, who gave the author full permission to use her as a character, spent over 700 hours silently gazing into the eyes of any audience members who chose to sit across from her. The novel follows film composer Arky Levin, whose wife suffers from a genetic disease and recently left him, ordering him never to see her again. At the MoMA, Arky meets a grieving widow from Georgia as well as a series of other characters, all transformed by Abramović’s performance as well as their tender, unsteady relationships with one another. This is the first novel by Australian writer Heather Rose to be published in the U.S.

The Art Forger by B. A. Shapiro

Our tour ends at the Isabella Stewart Gardner Museum in Boston, infamous as the site of the world’s largest, still unsolved art heist in 1990. In Shapiro’s novel, a struggling artist with a scandalous past must discover the truth about one of the stolen masterpieces she is hired to forge, before she is arrested for her involvement. The mystery features fictionalized 19th-century letters from museum founder Isabella Stewart Gardner herself. If you enjoy the special pleasure of reading about how artists assemble their work in great detail, this book is definitely for you.