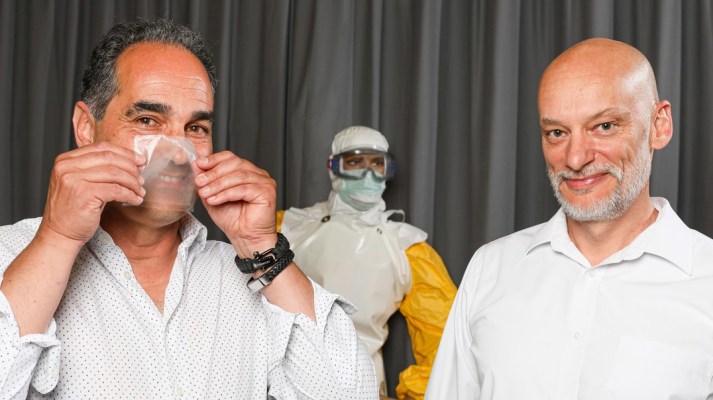 A Swiss startup called HMCARE, spun out of the École polytechnique fédérale de Lausanne, has raised a million Swiss Francs (equivalent to about $105 million) to commercialize its transparent and relatively eco-friendly surgical masks.

The founders were inspired by healthcare workers in the 2015 Ebola outbreak and at children’s hospitals around the world working closely with patients but unable to show their faces. Likewise parents and relatives of immunocompromised people who must make a human connection with two-thirds of their face covered.

There were technically transparent masks available, but they were just regular masks with a plastic window in them, which can fog up and isn’t breathable. Thierry Pelet, now CEO of the company, approached his EPFL colleagues with a prototype of a transparent mask material meeting the rigorous demands of a medical environment. It must permit air through but not viruses or bacteria, and so on.

The team worked with Swiss materials center Empa to create a new type of textile. Using biomass-derived transparent fibers placed 100 nanometers apart to form sheets and then triple-layered, they made a flexible, breathable material that’s also nearly transparent — a bit like lightly frosted glass. They call it the HelloMask.

The material can be made in bulk and formed into mask shapes just like normal cloth, but there is the matter of spinning up manufacturing for it. Fortunately, the world is desperate for masks, and the idea of a transparent one was clearly catnip for investors. HMCARE easily raised a million-franc seed round, the R&D work having been done using nonprofit donations and grants.

While the HelloMasks could launch as early as the start of 2021, they’ll be primarily for the medical community, though public availability is certainly a possibility.

Inflation is the ‘biggest poison’ for the global economy as recession risk rises, Deutsche Bank CEO says
Game of Thrones Spinoff Was Kit Harington’s Idea, According to George R.R. Martin
Op-ed: Why China’s Xi Jinping’s damage control is all about heading off a crisis
Our Favorite Essays by Black Writers About Race and Identity
‘Performative Advocacy Doesn’t Work’: Black Justice Leaders Talk Accountability and the Fight for Reparations