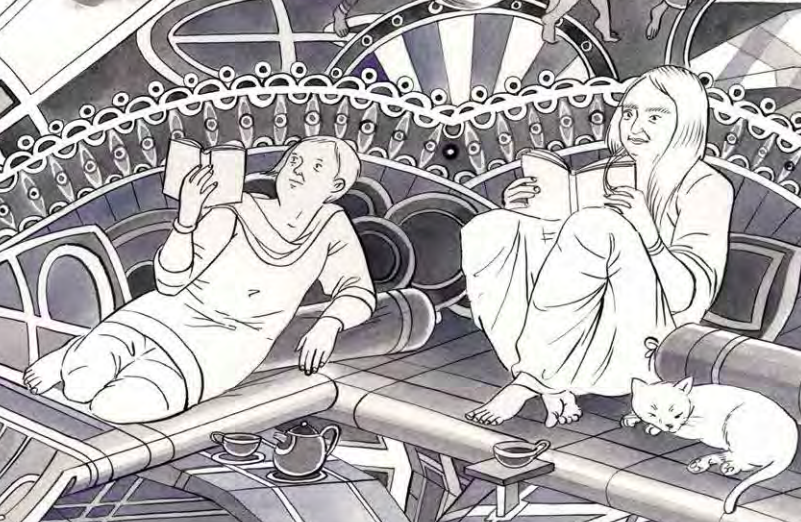 Like many people who identify strongly as readers, I’ve been having trouble with focus lately. While I yearn for the brain engagement that a good reading session can bring, I find my eyes skimming over words, my mind skipping like a broken VHS tape over images and emotions that keep me perpetually distracted. Some days are better than others, but many days, reading text-only books—a thing that used to light me up—feels almost impossible. However, there’s solace in the fact that I’ve found graphic literature more accessible to my flighty mind right now. Something about the combination of words and images, the pace of it, is a welcome barb that my mind can get caught on. There’s something soothing about the visual aspect, even if the content itself isn’t all that soothing. Beyond that, visual art is its own full-body experience, and sometimes it’s good to be reminded of that during this time of screen-overdose, anxiety, and grief—and especially in the midst of a world in which we are constantly perceiving the threat against our physical beings.

If you’re looking for engaging graphic literature, whether because you’re struggling to read text-only or not, here are twelve new and forthcoming adult graphic books that are worth picking up.

This gorgeous graphic short story collection from mega-talented illustrator Bishakh Som is funny, heartbreaking, and incisive, following women and gender-diverse characters on strange but familiar emotional journeys. The art is stunning, with full color and sepia tones, and different text styles in each story. There are dark moments here, but it’s a transporting work of fiction, rooted in South Asian myth and in the corporeal.

I Know You Rider by Leslie Stein

Leslie Stein is the author of three previous books, and her work has appeared in multiple prestigious places inlcuding The New Yorker, and Vice. In this new memoir, she chronicles a year of her life during which she had an abortion. This event serves as a jumping off point to explore what it means to make choices across our lives as humans, how we build families, how art and humanity are inextricable, and what it means to love. It’s a broad story that encompasses so much about life and joy, yet it’s a fast and totally resonant read.

Blair Imani is a prominent activist, speaker, and historian whose work (which includes a previous book, Modern Herstory: Stories of Women and Nonbinary People Rewriting History) centers global Black and queer communities. Making Our Way Home chronicles many aspects of the Great Migration from the perspective of several prominent figures like James Baldwin, Ella Baker, and Malcolm X, and shows how that time period continues to influence American culture, economy, labor, segregation, activism and civil rights. Beautifully illustrated by Rachelle Baker, this book is not only a great primer but a nuanced synthesis of American past, present, and future that centers social justice.

The successful social media duo Ash + Chess have made a name for themselves selling stationary and posting great photos on Instagram, and now they’ve brought their artistic prowess to a very sweet little book that serves as a colorful and joyous history of prominent LGBTQ+ figures and events, mainly in the west. It’s far from comprehensive, but it’s impossible to make anything about queer history comprehensive, for a myriad of reasons, not least because LGBTQ+ people are not a monolith. However, the book is quite diverse and a light read, perfect for a mood boost, especially if you need some queer joy.

This delightfully illustrated, heartwarming story of precocious four year old Nori and her grandmother is perfect for when you just want to remember what childlike innocence and wonder felt like. It’s not a children’s book, but rather a portrayal of early childhood (not to say kids can’t read it; this one is great for all ages). As Nori and her grandmother spend time together, the book weaves tradition, nature, and adventure into a story that is all but guaranteed to lift your spirits, and makes a perfect read for a long summer afternoon.

This one is pretty self-explanatory. For anyone who watched and loved the hit movie Parasite, this companion book is a frame-by-frame storyboard illustration of the movie that correspond to the script, plus behind the scenes production notes and stills. Bong Joon Ho is already revered as a visionary artist; this high-quality book is one more drop in that bucket.

Weng Pixin is a Singaporean multimedia artist whose work includes zines, textiles, and paintings. In this book of sweeping, colorful, totally gorgeous images, she explores human relationships, loneliness, memory, and beauty. A bound series of vignettes, Sweet Time is perfect for dipping in and out of — if you want to dip out, which you probably won’t.

In this second edition of vibrant posters, out in August, editor Josh MacFee assembles a compendium of art for justice, resistance, and revolution. There’s something visceral about the art of liberation, one part of an ongoing struggle to unite against power, greed, imperialism, and other oppressive forces. Color-coded to indicate themes such as Environmentalism, Racial Justice, Anti-Fascism, Labor, Health, and Socialsim (among others), this book serves a resource and inspiration. With forewords from both Charlene Carruthers and Rebecca Solnit, it’s a great reminder of some of the paths taken, and a fire-starter for the roads we must make going forward.

The Contradictions by Sophie Yanow

Speaking of radical politics, this one is all about grappling with how messy they are. Originally a webcomic, The Contradictions won the Eisner Award, and is now being released in September as a single volume. It follows a fictionalized version of the author’s young self—a queer, feminist, American student in Paris who falls for a girl named Zena, an anarchist vegan shoplifter. As they travel European cities, experimenting with drugs and ideologies, Sophie must come to terms with the complexity of politics and societies. This is perfect if you want to dive into a youthful existentialism that’s also quite moving and full of high-contrast, striking black and white illustrations.

The City of Belgium by Brecht Evens

Perhaps the most colorful volume of any on this list, this saturating graphic novel, dropping in September, will remind you what it’s like to go out in the city (remember that?). Following three 20-somethings as they go out for a night on the town in Belgium, Evens’s darkly funny story comes to life in hypnotizing watercolor that feels like the most fitting possible medium for the swirling, bleeding days of being 20ish in a city at night.

I Want You by Lisa Hanawalt

Fair warning, this one is gross. But if gross-out humor is your thing, and/or if you’re a Bojack Horseman fan, and/or you don’t mind lots of bodily fluids and bacteria, I Want You is for you. As the production designer/producer of Bojack Horseman, the creator of the Netflix series Tuca and Birdie, and the author of three previous books including bestelling Coyote Doggirl, Lisa Hanawalt has made a big name for herself in the comics/illustration/animation world. In this September release, she returns to her roots, collecting her first minicomic series into one volume. With lists like “Mistakes We Made at the Grocery Store” and “Top Causes of Freeway Accidents,” as well as the (mis)adventures of He-Horse and She-Moose, Hanawalt dives all the way into taboos with biting humor and excellent, sometimes too-good drawings. (See also: bodily fluids and bacteria.)

This highly anticipated short story collection illustrates the cusp between childhood and adulthood in Korea. Ancco skillfully renders this in-between, confusing time with the commanding illustrations that have earned her a loyal following since she began publishing diary comics in 2002. This collection is often dark, but it’s also bright in that way that youth can’t help but be. This is sure to be an ideal fall afternoon read when it drops in October.