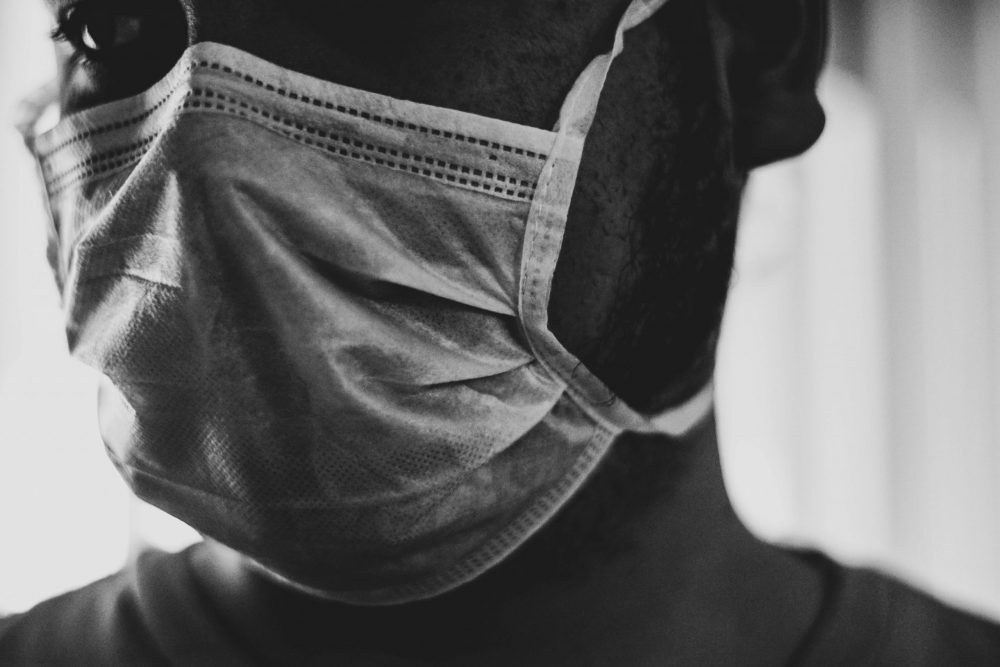 In the 1999 incarceration fantasy drama The Green Mile, Paul Edgecomb (Tom Hanks) is a despondent prison warden suffering from a chronic bladder infection that frequently incapacitates him and impedes his ability to effectively police criminals in the Depression-era South. In one pivotal scene, baritone-voiced inmate John Coffey (Michael Clarke-Duncan) dwarfs the prison bars that enclose him and lures Paul Edgecomb toward his cell. At once, John Coffey reaches for Edgecomb’s crotch. Rather than inflict violence or sexual assault, however, John Coffey heals Paul Edgecomb of his bladder disorder in a flurry of magical realism and billowing musical score.

Prior to this miracle, the white warden viewed Coffey’s hulking black 6’5’’ frame with suspicion, believing that Coffey deserved his death sentence for the sadistic violence he had allegedly wrought within the community. At the moment of Coffey’s supernatural healing, however, Edgecomb undergoes a change of heart. Coffey’s mystical ability not only proves his worth in Edgecomb’s eyes, but underscores his innocence. Although he is mild-mannered and lovable throughout the film, it isn’t until John Coffey demonstrates his “value” and transmutes from criminal to shaman that his metamorphosis as a Magical Negro is complete. The super-humanization of black characters to propel the moral arc of white protagonists is a commonly used cinematic and literary device, and today, in the era of COVID-19, the Magical Negro reappears on the news and in mass media as an economic and moral foil otherwise known as the Essential Worker.

Paradoxically, the Magical Negro is at once a super-humanization and dehumanization of the black individual. The trope positions blackness at the intersection of two apparently contradictory qualities, reliable strength and agreeable meekness. These are services that the Magical Negro dispenses to white characters because the Magical Negro exists only to serve. In the 2018 Academy Award-winning film Green Book, Mahershala Ali’s Dr. Donald Shirley exists as an ancillary prop for the deeper development of a caricatural Italian-American working-class man. Hardly any effort is made to explore how Shirley’s queer identity—compounded by his blackness—informs his worldview, his mental health, and his lack of safety while traveling across the United States. It is almost comedic how Shirley’s musical genius, despite being the primary driver of the film’s plot, is deployed as a method for the rehabilitation of Frank “Tony Lip” Vallelonga (Viggo Mortensen).

Vallelonga is introduced as a brutish yet likable “paisan,” a man who disregards decorum and gentility at every turn. In a poorly-crafted attempt at racial subversion, it is Vallelonga who is the simpleton and Dr. Shirley who is the cultural savant. And yet, Vallelonga’s middle-aged bildungsroman is the focus of the film. Dr. Shirley’s magical music converts Vallelonga into an attentive husband, a patron of classical music, a LGBTQ+ “advocate,” and most importantly, a black “ally.” Since the film’s release, Dr. Shirley’s real-life family and estate have condemned the film and the portrayal of his relationship with Vallelonga as false.

In these two films, as in countless others, the psycho-emotional and physical trauma that the black characters endure, the intricacies of their own personal histories, and the exploitation of their labor are regarded as mere footnotes. We never see these black characters substantially interact with members of their own communities, or even demonstrate an iota of distrust toward their white charges. The spell that the Magical Negro casts is an abracadabra of autophagy. Blackness is swiftly muted and perfunctorily eulogized as the camera pans to the apologetic and “well-meaning” white hero.

With the advent of COVID-19, the celluloid eulogies have transformed into ritual evening shouts and clangs of pots and pans. The Magical Negros of cinematic lore, those black sacrificial super-humans appropriated for the advancement of white people, have emerged as our essential workers. Once it became clear that lockdown would not be a temporary inconvenience, essential workers were catapulted onto a pedestal of national esteem; their existence became a salve of instant-gratification, providing counterfeit normalcy amidst a growing tempest. One need merely examine the language used to describe essential workers to observe their glorification into superheroes, fighting for our survival against a villainous disease. They are always on the “front lines,” “in the trenches,” or “on the battlefield.” Yet our society willfully refuses to acknowledge their vulnerability and systematically denies them sufficient safeguards.

Our essential workers are overwhelmingly black and brown individuals who have been neglectfully underpaid, unprotected, and subjected to the racial inequities that have always existed in our white supremacist nation. Capitalism has consistently demeaned our cashiers, grocery workers, delivery persons, sanitation departments, custodial workers, medical assistants, and public transportation employees. However, in our national moment of crisis, their service has been rendered critical—and their compliance imperative. Under the watchful eye of technocrats and governmental autocrats parading in democratic regalia, the essential worker is extended sufficient compassion so as to ensure their continued service, and not a drop more. The essential worker is bound to their labor through financial imperatives and ideological coercion thinly veiled as “professionalism.” They are thrown in harm’s way, risking their lives, the lives of their families, and the lives of their communities at the nation’s behest. In The Green Mile, the risk that John Coffey takes to save two white children costs him his life. At the moment of his electrocution, John Coffey sends mythical sparks throughout the execution chamber, yet there is no retribution for this punitive injustice. There is just a scene of a grief-stricken and healthy Paul Edgecomb looming over Coffey’s dead body.

Our profit-driven institutions have been failing the essential worker long before the threat of a pandemic, but unlike their cinematic counterparts, this version of the Magical Negro is not accompanied by a romantic score or Best Supporting Actor Academy Award. This Magical Negro is four times more likely to die from COVID-19 complications, has a doubled risk of unemployment, and is disproportionately represented among the unhoused and displaced. This version of the Magical Negro is not a fantasy, but the real-life manifestation of the sanitized and feel-good stories that the history books and the movies have constructed. We must not allow their pain to be reduced to “resilience,” because what we are witnessing is a spell of structural subjugation.

How can this sorcery be broken? An incantation is only as strong as the words used to conjure it, and therefore the language used to describe essential workers must transform. Essential workers are not “miracle workers”; they are “at-risk workers”; they are “vulnerable workers”; and the dangers they face warrant recognition. Their service is not always voluntary, and a true understanding of this dynamic approximates the vulnerable worker to the individual. A 7pm applause is not the only way to demonstrate gratitude; lobbying, donations, and calls demanding personal protective equipment, hazard pay, legislative protections against deportations, access to free childcare and healthcare are just a few tangible demonstrations of structural gratitude rather than performative allyship.

The next step is to divest power from the growing technocracy, privatized companies, and governmental institutions, and siphon it back into the hands of the laborer. Reagan-era de-unionization cemented a culture of consumerism that survives today, establishing a climate of fear in which workers are unable to mobilize against dangerous working conditions and unjust remuneration. The vast majority of today’s essential workers are hourly employees or members of the gig economy. Rather than admit that this new capitalistic trend devalues labor, our societal rhetoric elevates the grim reality of economic survival as demonstrations of “heroism.” In order to address the precarity of this underlying insecurity, worker’s rights and protections must return with a vengeance.

Eventually, there must be a national capitulation of the anti-black, anti-indigenous, and xenophobic foundations of the United States. The rhetoric of “liberty” and “freedom” is a smokescreen that has obfuscated the lived experiences of poor and working class people of color, since the same falsely meritocratic legacy that suppresses the Magical Negro is the one that kindles police brutality against marginalized communities. In fact, the very definitions of “men” and later “women” as detailed in our constitutional framework only retroactively include black and brown individuals. Even despite these revisions, heedless nationalism continues to prevent honest discourse. Only when this discussion is had in the open can the country progress. In order to fully shake the shackles of exploitation demanded by a capitalist system, all nations must begin imagining post-work and anti-work futures. In order to humanize the essential worker, the United States must recognize the intrinsic value of its denizens independent of the labor they provide.

This will require a paradigm shift that divorces one’s perceived utility in society from one’s profession. The concept of “hard work” that “builds character” must be reexamined as capitalistic propaganda that reifies white supremacy. If hard work creates honorable citizens that are worthy of praise, why are the hardest-working in our societies the least respected? Considerations like Universal Basic Income are just the beginning of ways individuals can self-actualize beyond the confines of productivity. The “magic” of the negro is simply a derivative the negro’s service. What if that service were reclaimed? Not in the form of black-owned business, entrepreneurial ventures, or visions of “black excellence” framed by monetary advancements, but rather as the right to flourish as essentially human? Magic indeed.