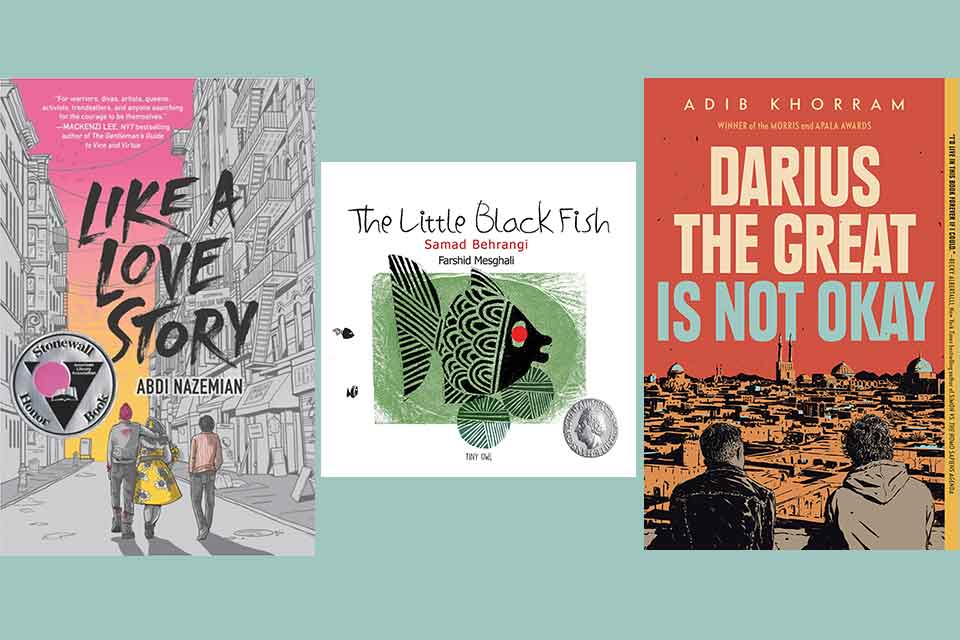 To mark the upcoming 2020 Neustadt Lit Fest and the announcement of the 2021 NSK Neustadt Prize for Children’s Literature, here is an excerpt featuring the children’s and young adult books selection from 100 Essential Books by Iranian Writers, curated by past Neustadt Prize juror, and WLT contributor, Niloufar Talebi. To read the full introduction and list, visit AAWW’s The Margins, where it was first published.

Two impulses led me to compile this list: to resist the forces that stifle the publication and distribution of literature created by Iranians and keep it off the world stage, and to celebrate the books that have reached readers of English.

The idea for this list originally came about as I raised these questions to myself:

What is this literature? What is (and is not) written and published inside Iran against pervasive state and self-censorship, cleverly reframed and filtered through tropes that elude the bureaucratic minefield and censors of the Ministry of Culture and Islamic Guidance? How and what can we, outside of Iran, with limited access, know of its diversity and aesthetic innovations? How do we overcome the barriers to international exchange? Are curators of the US book market willing to find ways to bring the creativity of literature in Iran to readers in translation?

Outside of Iran, what has been projected onto us by biased and often commodified productions, presentations, and consumption of our stories, that we in turn internalize—a different kind of censorship and self-censorship—and keep perpetuating in our literature? Are Iranians outside of Iran writing works against stereotypes enforced by the market that are not getting published? Can we write and publish beyond these stereotypes? Does this literature tend to repeat narratives whose fulcrum is always the 1979 Iranian revolution and historical events surrounding it that defined and disrupted our twentieth century? Is there value in that repetition—how World War II and Holocaust narratives are reinforced—or does it limit our imagination and output? Where is the fine balance between turning our historical realities into literature and escaping the manner in which that literature is cast?

This list resists the following circumstances—ones that literature written by Iranians inside and outside of Iran by authors of Iranian descent, in Persian, English, or any other language Iranian diasporic authors write in, faces to be available in English: suppression by the Shah’s regime before the 1979 Iranian revolution and the Islamic Republic after; the lack of Iranian government subsidies; the fact that Iran hasn’t signed the 1886 Berne Copyright Convention that protects literary and artistic works by providing creators with the means to control how their works are used, by whom, and on what terms, and because there’s no copyright treaty between Iran and the US, works by Iranian authors first published in Iran fall immediately into the public domain in the United States; sanctions that limit legal pathways for giving Iranian authors any compensation, or exporting any service to Iran, paid or not; the general limited interest in translated works as well as availability of translators; and productions that appropriate, commodify, frame and reframe, or sensationalize this literature, thereby raising Western readers that will only seek to understand the East through those lenses.

This list also celebrates that, despite challenges—which only show just how much further we can go to champion this literature—the abundance of literature by writers of Iranian descent, both at home in Iran and abroad, available in English is astonishing. Waves of migration out of Iran since 1979 have effectively resulted in the formation of a new literature. Since this list is a tip of the iceberg of the growing body of works by this subset, it is fair to assume that there is a significant body of literature here to warrant a major category and literary tradition of its own that contributes to the canon of world literature, however that canon is defined, its native environment the world itself.

I embarked on this list with an assumption of scarcity. But during the research process, I discovered an embarrassment of riches and came to realize that what has always made this literature seem peripheralized to me is not in the quality or quantity of available works, but in their positioning—as a literature of other. Iranians at home and abroad have tended to look to cultural institutions and discourses of the West for validation of their writings and identity. And the West has largely failed us while enjoying its self-made and -maintained privilege. But the West’s marginalization comes with a gift: we must (re)center ourselves. I hope that this list helps to deliver us from our search for Western validation and urge us toward active self-regard, solidarity, and authority. Toward fiercely championing and lifting our own compatriots and work, on our own terms, to the world.

This list is by no means comprehensive. It includes books written inside and outside Iran by authors of Iranian descent, in Persian, English, or any other language Iranian diasporic authors write in, and available in English. It omits theatrical, journalistic, sociological, and scholarly works. For the most part, these books have been published between 2000 and 2020. Many of the authors listed have written several books but are listed by one title to allow this list to contain as many different writers as possible. The numbers on this list do not indicate rank. Each category is sorted by publication date.

To read the full introduction and list of 100 Essential Books by Iranian Writers, visit AAWW.

This version is adapted for children 4–8 years of age in both prose and verse.

In the second book, Minoo Shirazi’s mysterious double-life continues to unfold across two thousand years of history. In the fantastical world of ancient Persia, the shock of discovering her royal heritage is overshadowed by the imminent invasion of Ahriman’s armies. Only by finding the empire’s champion, Rostam, can she hope to turn back the tide of evil. While in the modern world, Minoo’s life in Iran and America—where she has recently begun her graduate studies—deals with her stern father, dying mother, lost brother, and new American boyfriend. Across myths and modern realities, we delve deeper into the truth of Minoo’s life.

Naraghi is also the author of other notable graphic novels including Lifelike, Terminator: Salvation, and Witch & Wizard: Battle for Shadowland.