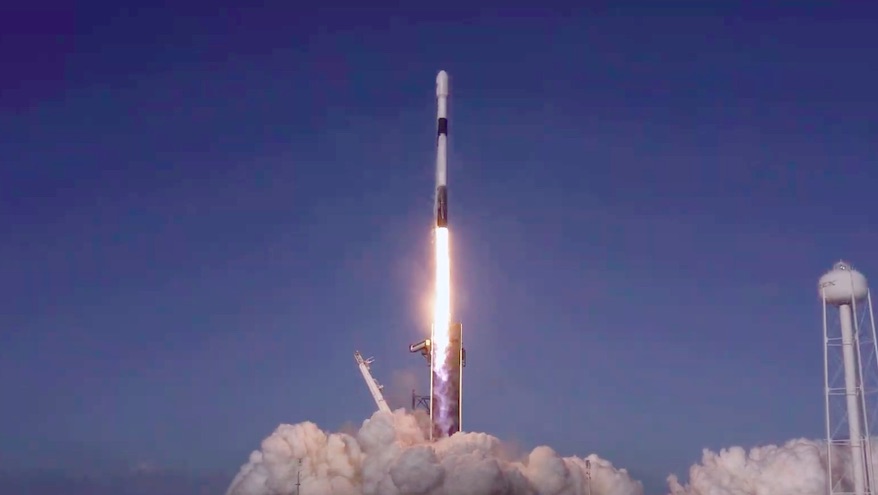 WASHINGTON — A SpaceX Falcon 9 launched another set of Starlink satellites Oct. 18 as the investigation into another Falcon 9 launch abort more than two weeks ago continues.

The Falcon 9 lifted off from Launch Complex 39A at the Kennedy Space Center at 8:25 a.m. Eastern. The rocket’s upper stage deployed the payload of 60 Starlink satellites 63 minutes after liftoff. The rocket’s first stage, making its sixth launch, landed on a droneship in the Atlantic Ocean.

Starlink is currently in a private beta test of its broadband internet system, and the company has said it plans to offer a more public beta test before the end of the year. In both the launch webcast as well as recent filings with the Federal Communications Commission, the company has highlighted early users of the system, such as the emergency management department in the state of Washington, which used Starlink to provide connectivity during recent wildfires in the state, as well as the Hoh tribe in the state, which previously had no broadband access because of its remote location.

The launch is the second Starlink mission in less than two weeks as SpaceX seeks to maintain a rate of roughly two Starlink launches a month to build out the constellation. Those launches have moved ahead while another Falcon 9, carrying a GPS 3 navigation satellite for the U.S. Space Force, remains grounded after a last-second abort Oct. 2 blamed on a problem with gas generators in the rocket’s first-stage engines.

That scrub led NASA to postpone a Falcon 9 launch of the Crew-1 commercial crew mission, which had been scheduled for Oct. 31. NASA announced Oct. 10 it was postponing the launch to the first half of November while the investigation into the scrub continues.

NASA has not issued any updates on the status of the Crew-1 launch, although one NASA webpage lists a launch of no earlier than Nov. 11. “That investigation is ongoing,” Tim Dunn of NASA’s Launch Services Program said at an Oct. 16 briefing about the scheduled Nov. 10 launch of the Sentinel-6 Michael Freilich ocean science satellite, which will also use a Falcon 9.

Dunn said that there has been a “tremendous amount of testing” since the GPS 3 launch scrub, including taking the Merlin engines from that rocket back to SpaceX’s McGregor, Texas, test site for further study. That investigation has involved NASA and Space Force personnel working with SpaceX.

He did not elaborate, though, on the specific problem with the engines or when either the GPS 3 or Crew-1 missions might launch. “We’ve learned a lot. There’s going to be some hardware implications as we move forward, depending on the engines installed on various rockets,” he said.

However, he did not expect the engine issue to delay the Sentinel-6 Michael Freilich launch. “As of today, we have a path forward that allows us to do whatever necessary rework may be required and still maintain that 10 November launch date.”