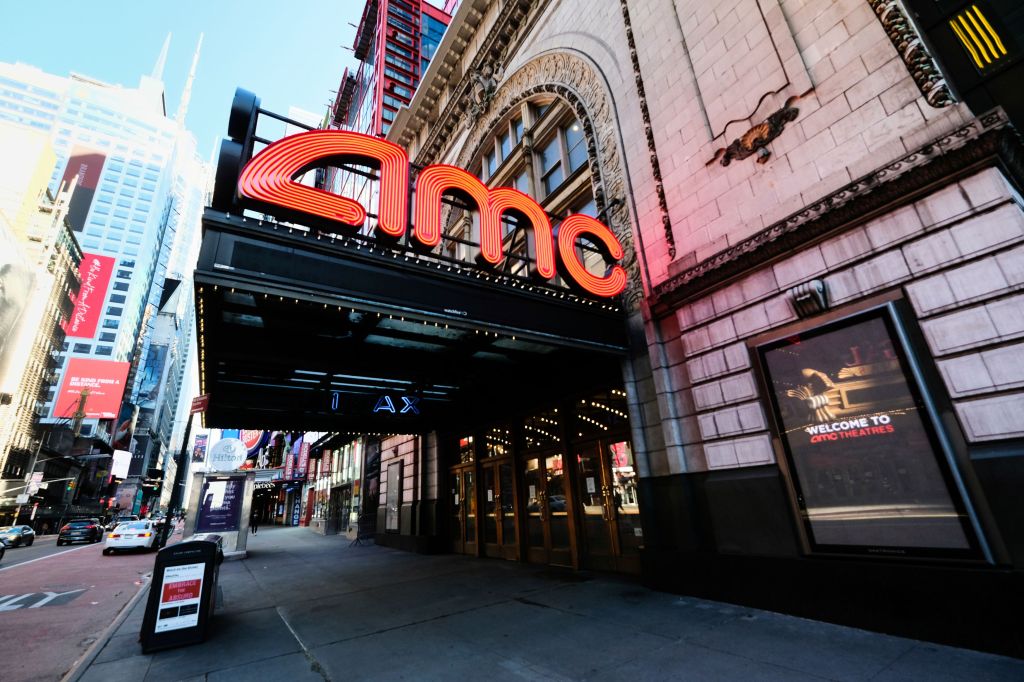 Showbiz shares sparkled Monday starting off March with a major market rally around reopening, another vaccine rollout, a stimulus bill and a combo of upbeat earnings and streaming forecasts.

Johnson & Johnson’s vaccine, the nation’s third, will ship this week and the possibility of $1.9 trillion flowing into the U.S. economy looks increasingly likely after the House passed a Covid-19 relief bill over the weekend and sent it on to the Senate.

The DJIA surged more than 700 points, or nearly 2.3% and other indexes jumped too with about 95% of all stocks higher today and entertainment a standout from exhibition to TV to live events.

AMC Entertainment shares gained 14% with New York City set to reopen theaters Friday after a year dark. The volatile stock is benefitting in part from renewed love on Reddit where investors have been tipping back into select shares led by GameStop. Other exhibitors saw bumps from Cinemark (up  7%) to Imax and Marcus (up 3%).

Live Nation shares rose nearly 5%. CEO Michael Rapino said Friday during an earnings call — citing conversations with state governors — that “a clear outline” has emerged for a 75% to 100%-capacity reopening for outdoor U.S. events this year. The giant venue operator also sold out tickets to two large U.K. festivals in August (Reading & Leeds and Creamfields) after the British government said large music events could resume at 100% capacity on June 21.

Classic media and entertainment stocks are also buoyant and it may be time to note an ongoing mood shift around companies as they make strides in streaming. Many have also posted better than expected quarterly results in advertising and other metrics after the horrific impact of Covid-19. “But the real catalyst has been the quarterly reporting of OTT subscribers,” said MoffettNathanson analyst Michael Nathanson in a recent report.

Despite a glut of new OTT services, Wall Street appears willing to consider each on the merits, although not assuming by any means that they’ll all survive on their own longer term given the challenging economics. Investors are certainly applauding Discovery after CEO David Zaslav announced 7 million new Discovery+ streaming subscribers since its December launch. The service also had a great write up today by New York Times media columnist Ben Smith. It’s up nearly 10%.

AMC Networks CEO Josh Sapan also impressed the Street Friday, beating earnings estimates, disclosing over 6 million year-end streaming subscribers and anticipating 20-25 million in 2025. Shares are up more than 6%. There’s been some upside confusion between AMC Networks and  AMC Entertainment, Nathanson and others noted, but there’s also some genuine enthusiasm. AMC shares had already surged since its last quarterly report in November, Nathanson noted.

He thinks  AMC Nets and others have Disney to thank.

“After a massive re-rating of growth equities and Covid winners, this stock [AMC Networks] — and many of their media peers — had been left for dead. Then, in December, after another successful investor day in which Disney laid out its DTC ambitions, the market’s complete shift to sum-of-the-parts valuation methodology at Disney opened the door for investors to try this approach on other companies.”

Nathanson said a “massive re-rating” in Roku has also helped valuations. He called Roku stock “essentially a play on AVOD and the long tail of SVOD players trying to money in the space.” It’s up nearly 5% Monday with a market cap of $52 billion. “If it’s worth that much, what are Pluto, Tubi and Peacock worth?”

Also today, shares of Pluto parent ViacomCBS are up 5% with Paramount+ launching this week. Tubi owner Fox is up 5%. Lionsgate, expanding in streaming with Starz, is up about 7%.

Fubo is up 7% as it prepares to report earnings Tuesday.

It didn’t hurt Monday’s markets that Berkshire Hathaway’s Warren Buffett, the 90-year-old know as the Oracle of Omaha, urged over the weekend in his closely studied annual shareholders letter “never bet against America.”