Here is my Q & A with the very talented journalist, motivational speaker and author of “How I Lost My Mind and Found Myself.”  The man that is fighting the stigma against mental illness and making it ok for people that identify as LGBTQ to be who they are. He is deemed a hero in the Arab community as he is the first Jordanian to come out publicly as gay in Yonkers NY. He is giving Arab LGBTQ people a voice. The very handsome David Rabadi.

Hello David. Thank you for taking the time out to speak with me..

It’s my pleasure. Thank you for the interview.

It takes a lot of guts to speak your truth. What made you decide to write your memoir “How I lost My Mind and Found Myself?

I decided I wanted to share my story because growing up there weren’t any examples or people in my life that identified as gay. Furthermore, I was taught that being gay was disgraceful and an embarrassment. I felt alone and out of place. I aim to inspire others to live their truth.  As you know being Arab and gay is very taboo and more importantly mental illness has a huge stigma. I wanted to be an example of someone that is Arab and gay, out and proud, living with mental illness and living a fulfilling productive life.

When you came out to your family and friends how was their reaction?

When I came out to my family it was in the middle of a psychotic episode. I was out of touch with reality. I came out and three days later I was diagnosed with bipolar disorder. So, my parents thought I had a mental illness that makes me believe I am gay and that I really wasn’t gay. It was a very hard pill for them to swallow. They didn’t accept it at first. I was battling mental illness and learning to live as an openly gay middle eastern man. Thank God I have amazing family and friends that love me and support me.

What bothers you most when it comes to the stigma of mental illness?

Good question. What bothers me the most about the stigma when it comes to mental illness, “bipolar disorder” in particular, is that we are viewed as crazy and violent. That is far from the truth. Bipolar disorder is a mood disorder that affects a person’s mood… they can go from happy and joyful to sad and depressed. With proper medication one’s mood can be balanced so there isn’t an imbalance in their mood. Most people that know me are very shocked to learn that I have bipolar disorder because I am a calm person and very laid back. Even in my manic state I have a lot of self-control.

What has it been like for you living as a gay Arab and being referred to as a hero?

It hasn’t been easy. I came out 12 years ago and there are still many LGBTQ Arabs that are scared to come out. However, I am very flattered that people have confided in me and have said I’m their hero for having the courage to come out and live my truth. They tell me I give them hope that one day they can live their truth.

You mention in your book meeting President Bill Clinton, Mariah Carey and doing a musical with Jennifer Lopez’s sister Leslie, who you had no idea was Jennifer’s sister.

Yes, I put my foot in my mouth when I told Leslie who happens to have a beautiful voice. I told Leslie she should try to get a record deal and she said I know people in the music industry and she wouldn’t want to be in that type of industry. I replied and said well if Jennifer Lopez made it you can because Jennifer sucks. In Jennifer’s defense she has worked really hard and has the passion one needs to make it in entertainment. Meeting President Bill Clinton was an honor. I asked him if he had any advice for a gay Arab? He said you are lucky you live in New York, which is very true. Meeting Mariah Carey was a dream come true. I am such a big fan of hers and her music has given me hope and confidence to believe in myself. It’s interesting that we both came out with our memoirs in the same year.

Is there anything different you would have written in your memoir looking back at it?

Yes. In my memoir I talk about an ex-girlfriend “Sandra.” She is an inspiration to me. She had a lot of obstacles in her life, but I wasn’t sure if she would be ok if I revealed her struggles. She is an amazing person that saw something positive in me. I spoke my truth about how traumatizing it was for me to be intimate with her and when she read that she was very hurt and for that I am sorry. I wish I could give her the world for always supporting me and believing in me.

You also talk about a DJ named Eddie that you had feelings for and ended up embarrassing him. Tell more about that?

I named him Eddie in the book but that’s not his real name and also my ex-girlfriend I called Sandra was a made up name. I didn’t want to cause anymore damage or upset them if I used their real names. As for Eddie I wish I could take back what I did, but I was in the middle of a psychotic episode so I couldn’t control my actions. I hope one day we can move past what happened and be friends.

Do you think you would write another book in the future?

I do think about writing another book. I just don’t know if it would be a love story, fiction or nonfiction. I am looking for the inspiration on my next book. 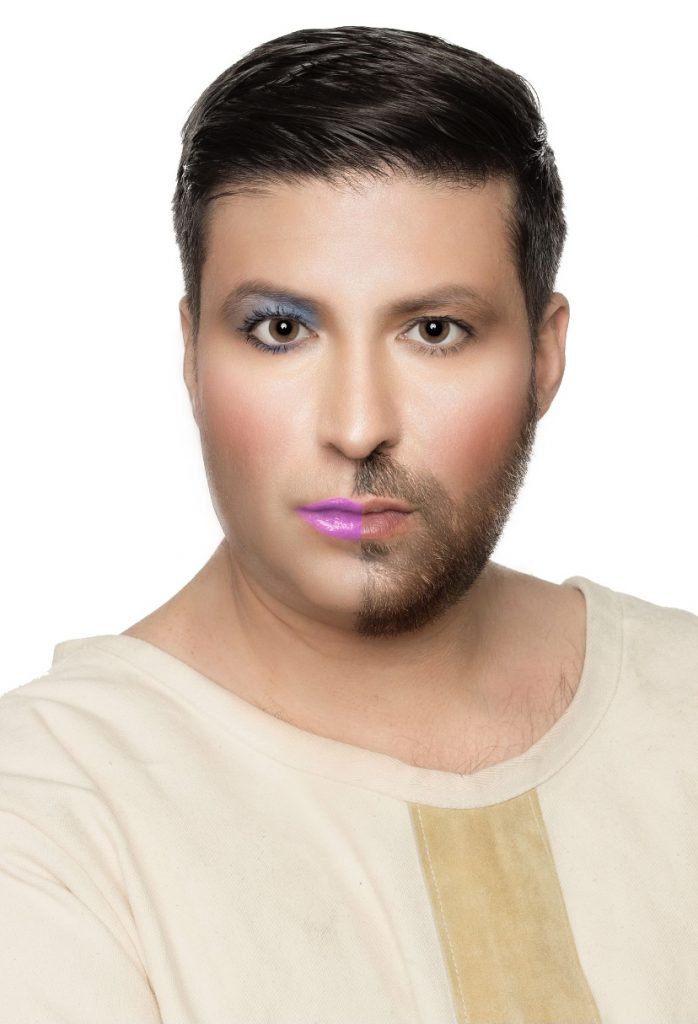 Can I ask how is your love life?

That’s a fair question. Currently I am single and looking to mingle. I am hopeful that my prince charming is out there. I am not the type of guy that will settle or just be in a relationship for the sake of it.

What is something about you that most people don’t know?

I can belly dance.

Really that’s awesome. What do you like most about your culture?

If there was one thing you could change in the world what would it be?

I would change people’s ignorance when it comes to sexuality, race and religion. We are all God’s children and the message of the Lord is simply love one another. People are so quick to point a finger and denounce a person’s being. We are all born sinners and only God can judge us. So, there is no reason for all the hate and racism.

What are some words of wisdom to all the readers?

Nothing lasts forever. Be kind and patient to yourself and others.

Thank you for your time David. All the best to you.

Thank you Eileen. I really appreciate you doing this interview.

Get your copy of “How I Lost My Mind and Found Myself” by David Rabadi on Amazon today:

The official website for David Rabadi may be found at https://www.davidrabadi.com

Brennan Elliott on Crossword Mysteries and Hallmark: “I’m Having the Best Time of My Life!”
Accelerometer sensitivity gets a laser boost
What to Watch: The Nevers, Younger, Monday
Mi 11, M11 Pro, Mi 11i Could Launch Alongside Mi 11 Ultra in India on April 23, Xiaomi Global VP Teases
Outriders Review: Fun Co-Op RPG Shooter Gets in Its Own Way