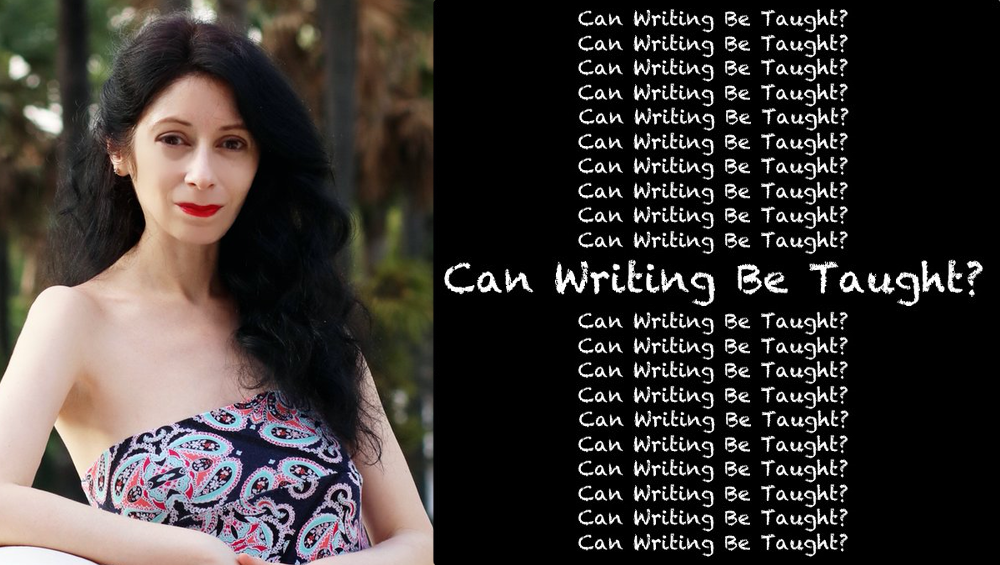 In our series “Can Writing Be Taught?” we partner with Catapult to ask their course instructors all our burning questions about the process of teaching writing. This time we’re featuring Rosebud Ben-Oni, author of If This Is the Age We End Discovery, who is teaching several upcoming workshops and seminars with extremely intriguing names like “Writing the Sex Poem” and “Pump Up the Volume: Poetry & Music Videos.” Ben-Oni talked with us about experimentation, Haribo, and how poetry resists rule-making.

What’s the best thing you’ve ever gotten out of a writing class or workshop as a student?

Honestly, in my MFA Program, it was being given the time to write, which was fully funded by a fellowship. Years later, in CantoMundo, a fellowship organization dedicated to Latinx poetry and poetics, it was the generous spirit of community. I completed my fellowship during three retreats when CantoMundo was still at the University of Texas at Austin, and those years really helped me bloom as a poet and write the kind of poems I wanted to write, to take risks, to experiment as much as possible, which I’d been doing on my own, but the encouragement and support I received during those retreats remain invaluable.

What’s the worst thing you’ve ever gotten out of a writing class or workshop as a student?

Not understanding the poets’ intention during a workshop or being able to ask what their intention is. The workshop professor downplaying or dismissing students’ feedback counter to their own (yes, this happened to me more than once), and not understanding students might not have the same reading tastes or come from different backgrounds (literary and otherwise.) Or encouraging a one-note atmosphere, by which I mean not being open to trying new things for the sake experimentation and curiosity and stressing only the importance of publication.

What is the lesson or piece of writing advice you return to most as an instructor?

Don’t edit before you write it all out, everything you want to say. I learned this myself by looking at my own writing process. It might not work for everyone, but it helps me immensely. If I have to take out some big ideas during editing, I save them for future poems

Does everyone “have a novel in them”?

Yes, in a sense, but that novel might a long poem. You might think I’m biased, since I’m a poet. I think everyone has stories within them, whether or not they want to tell them, and quite possibly many genres in doing so. Not everything begins and ends with a narrative arc. If that’s the case, might I, again, suggest writing a poem?

Would you ever encourage a student to give up writing? Under what circumstances?

That’s a hard NO. Don’t give up. Why would you? If writing is currently making you unhappy, step away from as long as you need to. Remember you don’t have to publish everything you write, right away, months from finishing a piece or even ever. Sometimes it’s best to take a break, and then come back, but try new things. For example, if you’ve been writing free verse, why not try a sonnet or villanelle? That’s just one example.

What’s more valuable in a workshop, praise or criticism?

They aren’t on opposite ends, though. Both are valuable, and often interwoven within each other. For instance, you can praise an idea you see emerging in a student’s poem, but perhaps it’s not as fully flushed out as it could be. When I was younger and a student, I remember I was in one workshop where the professor did not allow any praise because he felt it would not help us. Yet half the things he himself ended up saying were often “half-praise,” if you want to call it that, because students had admirable ideas that just needed more work. I believe it’s best to be candid about what’s working for you in a poem, but also realize what’s not working for you might work for others. That’s why it’s important to me to let the student speak during the critique, which I was rarely allowed to do as a student during my own workshop days; it was thought at time it was better to wait until everyone had their say. But things get lost, questions go unanswered  or not addressed at all, especially, as I brought up earlier, the poet’s intentions for the work. It was unfortunate.

Should students write with publication in mind? Why or why not?

I mentioned this earlier, but I think before you’re writing with publication in mind, write the poem you want to write first. You start putting a lot of pressure on yourself worrying about if it will meet a certain style or tone that you believe to be expected. Drown out the noise and get that poem you need to bring into the world.

In one or two sentences, what’s your opinion of these writing maxims?

None of them are maxims in poetry. The best thing about poetry is that once you start trying to define in one definition or give it rules, it will go and do the opposite, and I cannot tell you how happy this makes me.

What’s the best hobby for writers?

Curiosity! For instance, ask how things work, especially those that you are interested in.

Anything Haribo, especially Peaches and Happy Cola. Side note: before the pandemic happened, I featured at this reading with a reception beforehand that had wine, cheese, quiche tarts—things like that—but of course I broke out a packet of Happy Cherries, just as a well-known poet came up to me, introduced herself and said she’d come to see me read. She immediately eyed the candy, and I asked her if she wanted to try some. It brought her such joy I ended up just giving her the bag, as she kept saying “well, maybe just one more,” and then the event began. Afterwards, she congratulated me on a great reading and held up the empty bag! sSe promised to buy me a new bag. I told her not to worry about it. She insisted. I said, OMG. No. And she said: But I must. This went on for a good while. It was a wonderful night. We were actually supposed to read together a few months later. Then the pandemic happened. So if she’s reading this, I’ll keep some Haribo on hand, for when we can meet again, and share a bag (or two—I’ll be ready).