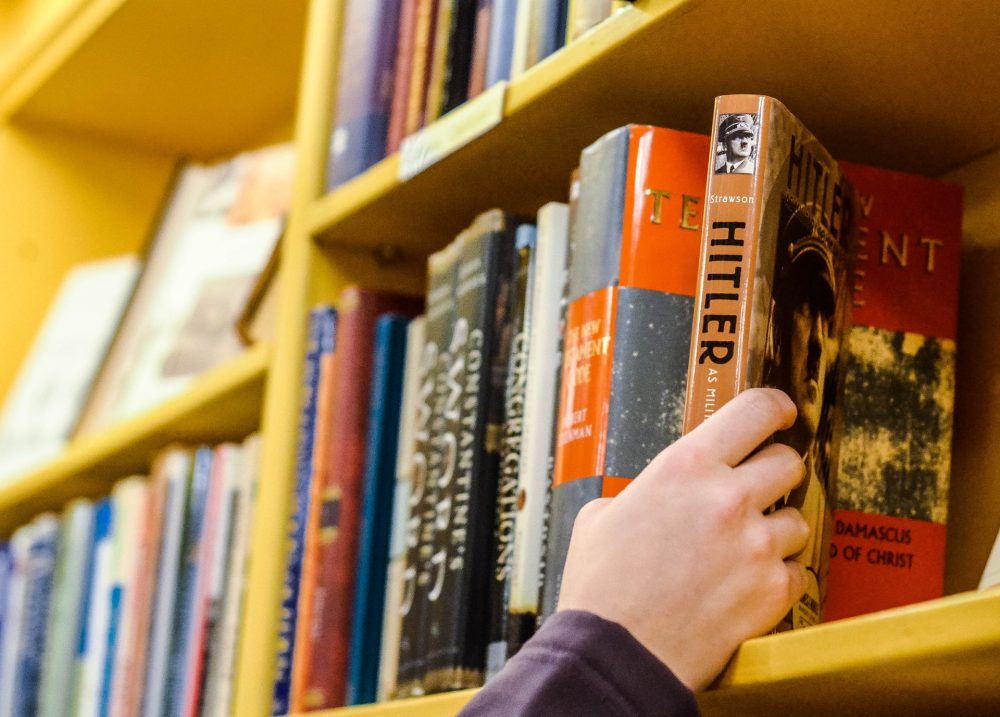 When Dr. Seuss Enterprises announced it would no longer be publishing six of Dr. Seuss’s books which have aged problematically, the bookstore I work at in Scranton, Pennsylvania had a flurry of very concerned customers.

People were coming up with stacks of his books along with an unsolicited-by-me explanation for why they were buying in bulk. They had to get them before they no longer could. Sure, it might only be three titles today, none of which they would have considered buying otherwise, some of which they’d never heard of. But what about tomorrow? What happens when we cancel Green Eggs and Ham?

I do understand the worry. A friend of a friend on Facebook shared a post that suggested no good ever came from banning books and it gave me pause. Then again, those six Dr. Seuss books are not even technically banned, at least not by any federal mandate. Dr. Seuss Enterprises decided independently to stop publishing—and profiting from—specific titles which included racist caricatures, and they weren’t even pressured to do so. They simply made a judgment call based on the social climate of our time and did the right thing.

My bookstore doesn’t sell those books anymore. But we do sell Mein Kampf.

I recently had to shelve four copies of Hitler’s semi-autobiographical manifesto during a shift at the store. As I held the stack between my elbow and my ribcage, I thought about the other books I’d held and shelved with care. I’m not Jewish, but plenty of booksellers are. What would it have meant for someone Jewish to have to carefully cradle four copies of a book that attempted to justify their nonexistence and promoted ideas that would eventually lead to the extermination of six million of their forebears?

The question of whether Mein Kampf is still a dangerous book raised its head in 2016, when the 70-year ban imposed on the reprinting and sale of the book in Germany was lifted because the copyright—granted to Bavaria in 1945—ran out. At that point, an annotated edition, including commentary on the lies and errors in Hitler’s writing, was published by the Munich-based Institute for Contemporary History. Few imagined it would become a German bestseller the way it had been during World War II when 12 million copies were in print. At the time of the reprint’s launch, there were only a few thousand copies available. One year later, the annotated edition went into its sixth printing and it had already sold over 85,000 copies.

The edition of Mein Kampf I was shelving is published by Mariner Books, an imprint of Houghton Mifflin Harcourt, the publisher of Mein Kampf in the United States. HMH has published Mein Kampf since 1933 and only started donating the profits to Jewish charities in 2000. In the two preceding decades, they kept the proceeds for themselves, and while the publisher has not stated how much money the book generates annually, estimates have fallen in the tens of thousands of dollars range, as reported by The Boston Globe’s Malcolm Gay in 2016.

Some believe that banning the sale of books—or arguing to ban them, for that matter—boosts the profile of the book in question. When Amazon tried to stop carrying Mein Kampf last March, and then shortly afterwards buckled under public opinion that it was infringing free speech and re-allowed sales, the book’s sales rank on the site rose from 50,000 to 3,115. In 2016, Adam Gopnik wrote in The New Yorker that the arguments Hitler puts forth in the book are not new, or entirely his, and it remains our struggle to resist them. He did not consider it dangerous enough to be banned. And of course, the publishers of the German annotated edition conjectured that allowing Mein Kampf to be disseminated and read widely should help demystify Nazism and root it out in our society.

But that’s not what seems to be happening. Increased availability of Mein Kampf correlates with more anti-Semitic activity, not less. German police recorded an increase in anti-Semitic offenses between 2016 and 2019, with just over 2,000 cases reported in 2019—the highest in 18 years. A similar rise was reported in the United States over that span of three years, with the number of anti-Semitic incidents—including physical assault, harassment, and vandalism—hitting a high of 2,107 in 2019, the worst year since the Anti-Defamation League began keeping records in 1979.

Obviously, those numbers aren’t directly caused by the lifting of the ban on reprinting Mein Kampf in Germany, especially not in the U.S. where another megalomaniac leader was elected in the same year. But the data does undermine the intellectual utility of the book as presented by Gopnik and others in 2016. Jonathan Greenblatt, the Anti-Defamation League’s CEO, told the Associated Press that the violence seen in 2019 was partly attributable to the “normalization of anti-Semitic tropes.” If the ubiquity of Mein Kampf in bookstores isn’t deterring anti-Semitic violence, which it certainly isn’t, then why maintain it?

My friend (who is Jewish) and I (who am not) often rewatch a scene from the second season of HBO’s Succession to make ourselves laugh. In it, the bumbling character Tom has to vet one of the conservative talking heads that the Roy family employs, as there are rumors that the man is a full-fledged neo-Nazi. Tom asks the guy if he’s read Mein Kampf before, to which the man affirms that he has, “a couple times.”

“A couple times?” Tom asks. “Are there Easter eggs in there you didn’t get the first time?”

That line never fails to send my friend and me into hysterics because it’s making light of an absurd conceit, which is that someone could claim to read Mein Kampf “a couple of times” for the sake of pure knowledge. No one who considers Hitler a monster is reading the whole of Mein Kampf more than once. They don’t need to own it.

I am typically in favor of using careful consideration when taking so-called “dangerous” books out of circulation. I’m well aware, for instance, that one of my favorite books—James Joyce’s Ulysses—was banned or suppressed in many countries for nearly fifteen years after publication, on the grounds of being obscene. Our understanding of what makes a book dangerous, and how that supposed danger weighs against its other merits, may evolve over time, and the decision that a book’s harm eclipses its value should not be made casually. But our views on genocide will not, or should not, change. Furthermore, Mein Kampf is not a literary work; it is a self-defense written by a man who did most of his damage through rhetoric and lies. Those living in Hitler’s time learned the destructive power words can have when passed from the lips of a dangerous, deluded leader to the ears of his dangerous, deluded supporters. Those living in this time have learned that, too.

Today is Yom HaShoah, Israel’s day of commemoration for the six million Jews killed in the Holocaust. Right now, out of 1,474 global ratings of Mein Kampf on Amazon, 74 percent give the book five stars. Out of the four copies I shelved a month ago, only one remains. My coworker told me she knows who took home one of them: a teacher. He caught her judgmental gaze and quickly explained that he thought he probably should have read it at least once, just to know. Okay. Sure. But there is a place you can go to read a book just once. We call it a library.

I know what can happen if history is erased. I’m not advocating for the annihilation of the copies of Mein Kampf that currently exist. But I do believe they should be pulled from bookshelves and kept in the publisher’s warehouse, only to be distributed to libraries or to writers, historians, and students who request the text on academic grounds.

It’s on the publishers of Mein Kampf to put this plan into action. The fact that they currently donate the profits of the sale of Mein Kampf to organizations promoting Jewish tolerance should bear no weight. It’s telling that when HMH decided to let a range of nonprofits apply for the funds to promote tolerance projects, the Boston Children’s Museum, whose proposal was accepted, backed out of the plan, citing discomfort with “placing the consequences of this book in such close proximity to the Children’s Museum.” The museum is not the first organization to decline the chance to be Mein Kampf profiteers. In 1976, The German Welfare Council made a deal with Random House, the UK publisher of Mein Kampf, to put the book’s royalties towards helping Jewish refugees from Germany; no Jewish charity wanted the money. Twenty-five years later, the council ended the deal, and returned £250,000 worth of royalties back to Random House, because there weren’t many Holocaust survivors left to help. If publishers of Mein Kampf really want to support Jewish causes, they could simply stop publishing Hitler, instead of trying to offset the moral cost with dirty money.

Adam Gopnik is right that it is still our struggle to resist the arguments of hatred. I, too, am interested in understanding what makes a man like Hitler tick. But there are so many other voices writing on the subject—from people who didn’t plan and execute a mass genocide—that I’d much rather read.