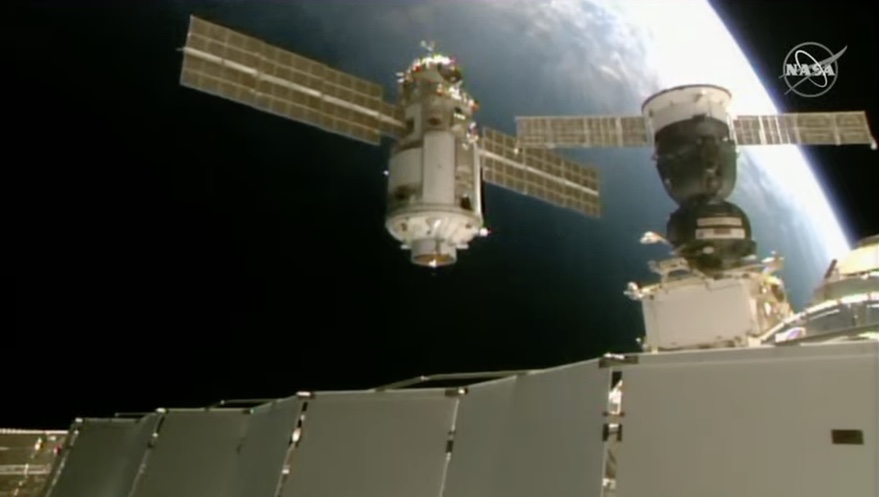 ORLANDO — A Russian module that docked to the International Space Station July 29 started firing its thrusters hours later, briefly knocking the station out of its normal attitude and forcing NASA to delay a commercial crew test flight that was scheduled to launch July 30.

The Multipurpose Laboratory Module (MLM), or Nauka, docked with the station’s Zvezda service module at 9:29 a.m. Eastern. The module, which has its own propulsion system, approached the station and docked automatically, without any apparent problems.

The problem, while serious, did not pose a threat to the safety of the seven people on board. “There was no immediate danger at any time to the crew,” Joel Montalbano, NASA ISS program manager, said in a call with reporters a few hours after the incident. Flight controllers, he added, train regularly for contingencies like this, and worked quickly to resolve the problem.

Station controllers in both Houston and Moscow were still working to understand what caused Nauka to fire its thrusters, although Montalbano said Russian controllers had “inhibited” the thrusters to prevent them from firing again. The station was drifting at up to half a degree per second, mostly in pitch, a rate he said made him “not too worried” although analysis of the effects of the thruster firings continue.

Station crewmembers reported around the time Nauka was firing its thrusters that they may have spotted some debris floating away from the station. However, there is no evidence of any damage to the station, and Montalbano said the crew may have seen “flakes or something” from the thrusters themselves.

He said engineers expected to have a “quick look” analysis of the station done by the end of the day July 30, while controllers worked to reconfigure Nauka. Russian cosmonauts on the station were preparing to open the hatch to the module around the time the thrusters fired but had not yet entered the module.

Nauka launched July 21 on a Proton rocket. Immediately after reaching orbit, the module suffered several technical problems, including with its propulsion system, that caused some to worry about its ability to safely dock with the station. Russian controllers were able to resolve those issues and went ahead with the removal of the Pirs airlock module, which occupied the port Nauka was to dock with, July 26.

With the investigation into the unplanned thruster firing continuing, NASA decided to postpone the scheduled July 30 launch of Boeing’s CST-100 Starliner commercial crew vehicle on a second uncrewed test flight, called Orbital Flight Test (OFT) 2. The launch of OFT-2 on an Atlas 5 is now scheduled for no earlier than Aug. 3 at 1:20 p.m. Eastern.

“Right now Starliner and the Atlas are ready to go,” Steve Stich, NASA commercial crew program manager, said at the briefing. The Atlas 5 carrying Starliner rolled out to the pad earlier in the day and the teams were working no issues with the spacecraft or launch vehicle.

However, he said NASA decided it was better to resolve the situation on the ISS first before launching OFT-2. “We want to make sure the space station is in a stable configuration and ready for Starliner to arrive,” he said. “Right now, it doesn’t make a lot of sense to send another vehicle station’s way.”

NASA has reportedly considered shifting the launch to July 31, a date that it had previously ruled out because of classified activities on the Eastern Range, but Stich said at the briefing that NASA was not planning a launch on July 31.

Montalbano, in the briefing, took pains to downplay the incident. “Until you exhaust all your contingency plans, you’re not really starting to worry,” he said. “And we didn’t do that today.”