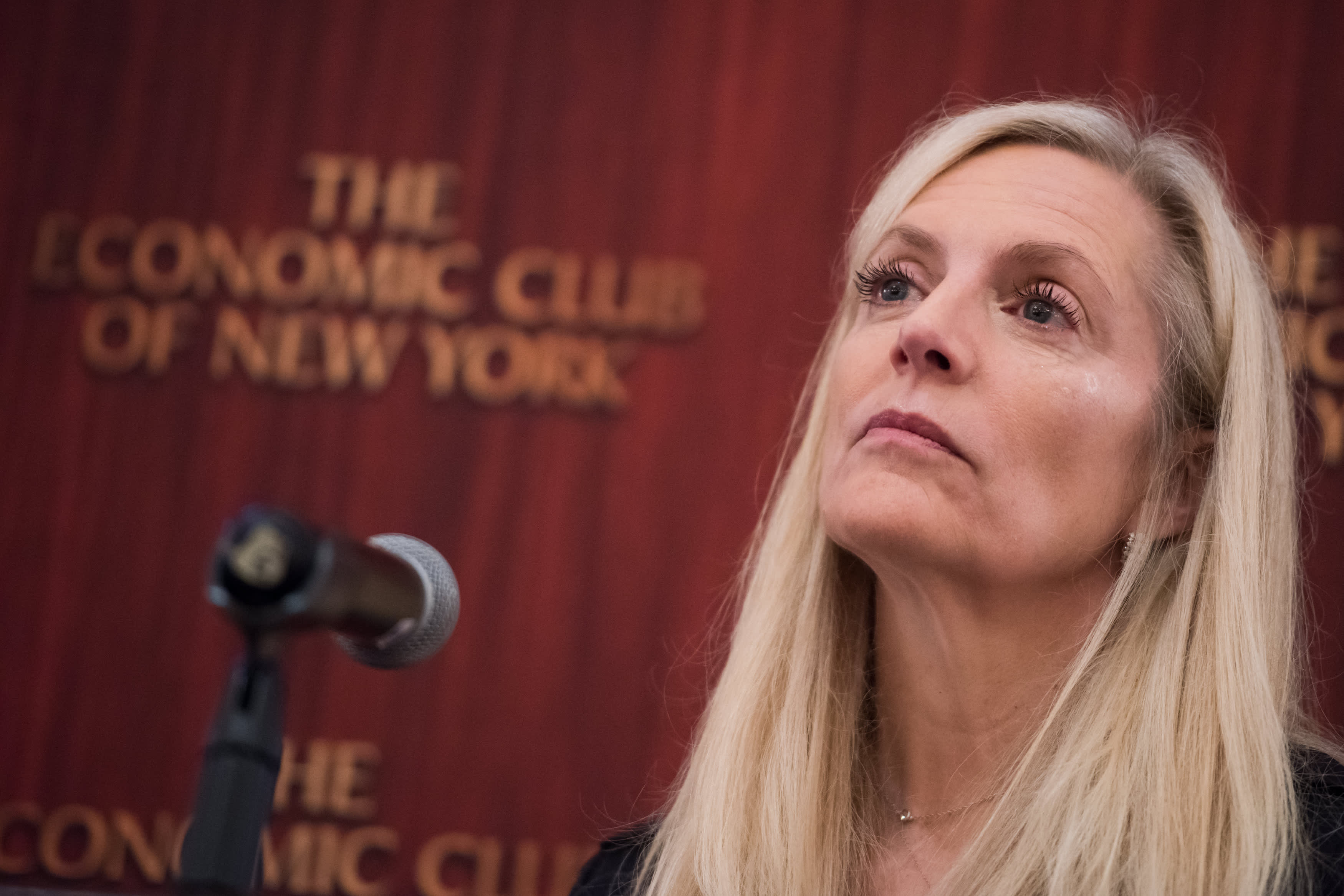 Lael Brainard is often the outlier.

In her role as one of seven Federal Reserve governors, she’s made a habit of objecting to otherwise-unanimous motions to roll back financial regulations. Until her first objection in 2018, no governor had dissented since 2011.

Barring her handful of dissents each year, there have been just three others from her colleagues in recent years.

One of Brainard’s more-recent dissents came in June 2020, when the Fed considered changes to the Volcker Rule, a landmark provision of the financial-crisis Dodd-Frank law that limits banks’ dealing with private-equity firms and hedge funds.

Brainard cast the sole vote against altering the rule. The proposals, she warned, could weaken core protections and allow banks to “return to risky activities seen in the 2008 financial crisis.”

As the only Democrat on the Fed’s board, Brainard’s objections — 12 in 2020 alone — went unheeded.

But now someone is listening. And his name is Joe Biden.

The president has picked Brainard to be vice chair of the Fed, one of the most powerful economic positions in the world and perhaps the heir apparent to the Federal Reserve chair role itself. Biden on Monday picked Jerome Powell to lead the Fed for a second term.

The job of Fed vice chair carries say in how interest rates are set, the balance of employment versus inflation, and the direction of regulation over the nation’s biggest banks like JPMorgan Chase, Bank of America and Wells Fargo.

“While there’s still more to be done, we’ve made remarkable progress over the last 10 months in getting Americans back to work and getting our economy moving again. That success is a testament to the economic agenda I’ve pursued and to the decisive action that the Federal Reserve has taken under Chair Powell and Dr. Brainard to help steer us through the worst downturn in modern American history and put us on the path to recovery,” President Joe Biden said in a prepared statement.

“As I’ve said before, we can’t just return to where we were before the pandemic, we need to build our economy back better, and I’m confident that Chair Powell and Dr. Brainard’s focus on keeping inflation low, prices stable, and delivering full employment will make our economy stronger than ever before,” he added. Together, they also share my deep belief that urgent action is needed to address the economic risks posed by climate change, and stay ahead of emerging risks in our financial system.”

A spokesman for the Federal Reserve declined to make Brainard available for an interview.

Biden on Monday announced his intent to nominate the 59-year-old Brainard to serve as Powell’s deputy to help manage the U.S. economy through a jump in inflation, a steady but uneven recovery and sluggish labor force participation.

Brainard herself was thought to be under consideration for the top job role in the days leading up to the White House announcement. But Powell, a Republican, earned high marks from leaders in both parties for the Fed’s actions in 2020 to flood the economy with cash as businesses across the country closed thanks to Covid-19.

Economists say that near-zero interest rates and the Fed’s $120 billion in monthly purchases of Treasury and mortgage securities saved the U.S. economy from an even deeper recession and is reason for the faster-than-expected rebound.

The administration’s decision to promote Brainard to vice chair is thanks in part to progressive lobbying and Democrats like Sens. Elizabeth Warren of Massachusetts, Sheldon Whitehouse of Rhode Island and Oregon’s Jeff Merkley.

Throughout the summer and fall, Warren encouraged Biden to find a Fed chair tougher on banks and to stay away from Powell, whom she called a “dangerous man.” Others, like Whitehouse and Merkley, pushed for a candidate who considers climate change a serious threat and would reframe the way banks consider its risks.

Brainard has in recent months delivered speeches on topics including climate change and the race-based economic disparities that the Covid-19 pandemic exacerbated.

She told Harvard undergraduates in February that while the Labor Department’s headline unemployment rate is a useful metric, it tends to mask inequalities when taken in isolation. Instead, she said she considers broad-based and inclusive maximum employment a “critical guidepost for monetary policy.”

Some viewed such speeches as a not-so-subtle attempt to distinguish herself from Powell, who had been reluctant to expand the Fed’s jurisdiction to topics that could be perceived as partisan.

Though it was created by Congress and its leaders are confirmed by the Senate, the Fed has long placed a premium on its political independence.

Board members serve 14-year terms in part to insulate them from the day-to-day desires of elected officials. But that power is bestowed with a narrow mandate: Use monetary policy to maximize employment, stabilize prices and moderate long-term interest rates.

Brainard did not always appeal to the progressive wing of the Democratic Party.

Just 12 months ago, with speculation raging over whom Biden might tap to be his Treasury secretary, some progressives painted Brainard as too moderate for the role.

“We need a Treasury Secretary who overcomes the Bill Clinton and early Obama era Democratic technocrat’s fixation on budget deficits that Brainard peers and colleagues like Robert Rubin and Tim Geithner exhibited,” he and his colleagues wrote

“Brainard has proved that she won’t go to bat on climate issues at the Fed. How can we trust that she will, as Treasury Secretary?” they added. The Revolving Door Project is part of the Center for Economic and Policy Research, a left-leaning think tank.

Brainard has also pressed the case for a digital dollar and is seen as a leading voice on financial innovation at the Fed. She said at a springtime conference that a cryptocurrency backed by the central bank could make it easier to service the nearly 1 in 5 Americans considered “underbanked.”

“The Federal Reserve remains committed to ensuring that the public has access to safe, reliable, and secure means of payment, including cash,” she said at a conference presented in May by Coindesk. “As part of this commitment, we must explore — and try to anticipate — the extent to which households’ and businesses’ needs and preferences may migrate further to digital payments over time.”

Brainard is no stranger to the Fed and has served on its main governing body, known as the Board of Governors, since 2014. If confirmed by the majority of the Senate, Brainard would serve as vice chair for four years after current Vice Chair Richard Clarida’s term expires next year.

Her life and career are both marked by international relations.

Brainard was born in Hamburg, Germany, to a Foreign Services officer and grew up in East Germany and Poland during the Cold War. Her education, which culminated in a PhD in economics at Harvard in 1989.

Her studies focused on the relationship between international trade policies and employment. She worked for the Clinton administration’s National Economic Council during the 1990s, when she served as one of the president’s chief advisors to the Group of Eight industrial nations.

After George W. Bush administration, Brainard rejoined U.S. government in 2009 as Treasury’s under secretary for international affairs, which at the time made her the highest-ranking woman in the department’s history. As Treasury’s chief diplomat, she represented U.S. interests throughout the global financial and European debt crises.

She resigned from the Treasury post in 2013 as it became clear that former President Barack Obama planned to nominate her to the Fed’s board. She began her 14-year term at the central bank in June 2014.

For most of her time at the Fed, her quiet ambition and data-driven work have endeared her to her Republican colleagues like Powell. Those qualities have also made her a routine candidate for the nation’s top economic posts as appealing to senators on both sides of the aisle.

But as the Biden administration prolonged its decision on whom to nominate, some believe Brainard’s confirmation odds have waned somewhat among Republicans.

Her recent speeches about climate change and other progressive priorities, coupled with a longer track record of supporting bank regulation, is believed to have eroded some support among Republicans over the past 10 months.

Her history of favoring lower interest rates at the risk of fueling inflation — albeit to boost employment — may be no longer be vogue in an economy with consumer prices rising at their fastest clip since 1990.

PEN15: Hulu Comedy Series Ending; No Season Three (At Least for Now)
William and Kate Will Probably Not Stay With Meghan Markle and Harry On U.S. Tour
Thanksgiving box office tops $142 million as moviegoers return for ‘Encanto,’ ‘House of Gucci’
5 Albums Out This Week You Should Listen to Now
Black Friday shopping in stores drops 28% from pre-pandemic levels as shoppers spread spending throughout the season