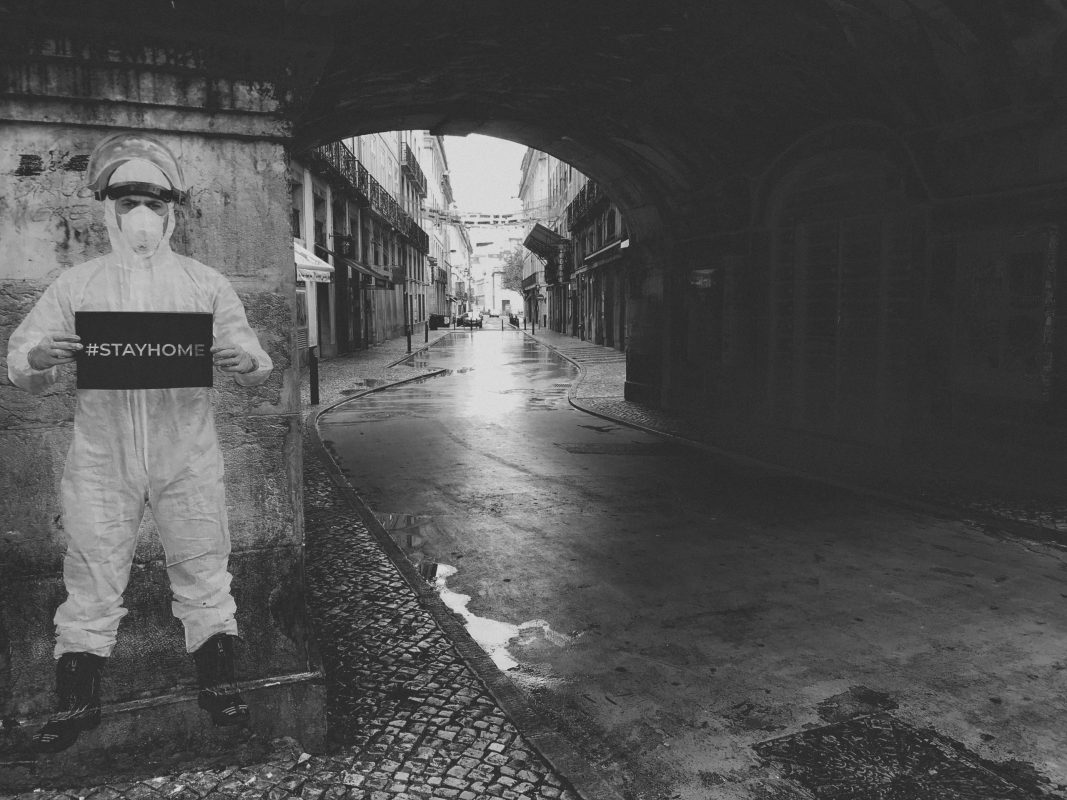 I’ve noticed a trend on social media where readers (and writers) have said they don’t want to engage with pandemic fiction. As a writer who is releasing a book with a plague thread, I’ll be honest that I both understand these posts but am also deeply hurt by them. I understand this reaction because we are of course living in our own pandemic. Many of us (including myself) have had our own losses, have had to lock down and cautiously emerge only to lock down again, perhaps just as fearful of the actions of our fellow human beings as we are of contagion.

In the early days of Covid, I fell into a malaise—a combination of lack of sunlight, fear that a book I had worked on for over ten years might never be published, and, even for a somewhat introverted writer, coming to the realization that writing in a café, going to a movie, or even visiting family was not an option. And yet despite these realities and in the wake of welcome escapes like The Queen’s Gambit, The Tiger King, and a newfound hydroponic gardening hobby, I saw people re-reading novels like Station Eleven because, after all, a novel like that isn’t really about a virus but about people, community, and our capacity to dream. The process of selling How High We Go in the Dark helped me articulate that a good deal of pandemic and post-pandemic fiction (more than I realized) isn’t really about a virus, but about our emotional, societal, and cultural reaction to it—the way we come together (or not), how we continue to love, how we are forced to reimagine grief, how we hold onto hope and memory in the face of a changed world.

I started writing the seeds of How High We Go in the Dark partly as a way for me to explore my own grief and lack of closure regarding the death of my grandfather in the early 2000s. Living in Japan at the time, I was fascinated by how an aging populace—in a country where technology and tradition rub elbows—was addressing issues of space and cost (and yes reimagining traditions) when it came to saying goodbye to loved ones. These funerary explorations organically evolved as plague and cosmic/speculative narratives were incorporated during the following years, thinking about the beating heart of franchises like Star Trek and the humanistic messages of Carl Sagan. And while my novel was drafted pre-pandemic, I edited the novel in 2020 and 2021, faced with the realities of just how much a world altering event would is forcing us to reimagine our relationship with not only death and grief, but also how we choose to live.

While reading any kind of pandemic narrative might be difficult for some to varying degrees, there are so many books that never privilege the trigger or cause of trauma, but seek to enter into a dialogue with what comes after—How does grief become a part of our history? How do we as individuals and as a society use a difficult moment to reimagine our future? How does a pandemic act as a lens to inspect climate change, racism, and other important issues? These books aren’t beach reads or stories to be taken lightly. And they aren’t supposed to be. You’ll cry. You’ll think about your own past. You’ll think about how the human species navigates this planet in both beautiful and highly problematic ways.

The following novels all deal with a world changing event (a viral pandemic or something just as significant), but for all the background nods to cataclysm, these wildly inventive and deeply affecting stories ultimately focus on what it means to be human, what it means to be part of a community and the world at large. And in that way, perhaps pandemic and post-pandemic fiction, regardless of if you choose to engage with it now, is an important part of our journey as we move forward.

Death With Interruptions by Jose Saramago

Like Blindness, Saramago entertains another world altering/inexplicable event. But instead of exploring humanity when something is taken away from them, Saramago plays with the idea of how an unnamed country might respond if everybody simply stopped dying. Ranging from financial consequences for hospitals and funerary homes to philosophical issues for religious leaders to the dilemmas of the elderly, the novel interrogates how important death is as a biological process and as a spiritual and philosophical concept in how we define humanity. But beyond this larger scale exploration is also another narrative of a personified Death who is undertaking this experiment, which takes up much of the latter part of the novel. Her own fascination and infatuation with a cellist who refuses to die once the deathless experiment ends allows for Death herself to experience humanity.

The Illuminations by Kevin Brockmeier

Imagine a fantastical affliction that didn’t make you ill, but laid bare whatever physical, emotional, or even spiritual malady you had through glowing light. This is the general premise of The Illuminations. The book is structured with independent sections each following another character, although a diary appears in all of them lending a loose overarching structure.

I debated about including The Brief Histories of the Dead here, but that seemed like a too obvious choice for this list, and I wanted to share the quiet beauty that shines through these pages. If you could see a co-workers secret illness glowing within them, how would you behave? What would you say (if anything)? What if you walked down the street and everybody’s heads were glowing b/c nearly everyone was dealing with some kind of depression? It is the acknowledgement of pain, the living with pain, the community of pain that makes the snapshots of lives in this collection of character studies resonate beyond the fantastical premise.

The Book of M by Peng Shepherd

In a collapsed world where large segments of the population have lost their shadow (and with it their memories), war has emerged between those with shadows and the shadowless, who have also developed the ability to shift objects into weapons. Much of the novel focuses on an interracial couple, Max and Ory, simply trying to survive in this upturned world, with Max suddenly leaving when she loses her shadow, fearing herself to be a danger, and Ory searching for her. Unlike the first two entries in this list, Shepherd’s Book of M is less quiet (full of twists and apocalyptic tension) but this does not mean she sacrifices smart, layered (and notably diverse) character work that digs at what it means to live and hope when the world is spun into chaos. For fans of literary speculative thrillers like The Passage, Station Eleven, and Angelology.

The Companions by Katie Flynn

Although there is a pandemic in this novel, the virus that has decimated large segments of the populace takes a backseat to the technological wonder of uploading your consciousness into artificial companions (everything from very robotic-like contraptions to models that could potentially replace you). The primary thread of the novel focuses on the companion, Lilac, as she ventures to find out who killed her in her real/original life. We soon meet other primary POV characters that help both Lilac and the worldbuilding of this future. As the pandemic subsides, questions of mortality are understandably present but the technology also raises questions about the fundamental nature of identity/self and humanity. Readers who liked Ishiguro’s Never Let Me Go and Klara and the Sun should check this out.

A Beginning at the End by Mike Chen

Set in a world six years after a devastating pandemic, the novel starts with three characters in a recovering San Francisco: a widowed father raising a daughter, a famous musician whose fame is kept under wraps, and a wedding planner. In this world, trauma and anxiety (Post Apocalyptic Stress Disorder) take center stage where people are not ready or willing to seek out new connections and form families to the degree that a Family Stability Board is created to protect a precious resource: children. When this Board threatens to take Sunny (the daughter) away from Rob (her father), hard truths about the past are revealed which leads Sunny to run away. The following journey of the book’s primary characters in search of Sunny provides a post-apocalyptic canvas for interrogating each character’s past and how they are moving through trauma through their newfound connections.

At times, I almost forgot there was a pandemic in this novel due to Van Den Berg’s beautifully written and layered exploration of life in a hospital ward. But this isn’t One Flew Over the Cuckoo’s Nest. The book is split in two primary parts: The first focuses on the life of Joy and the other “inmates”, members of an experiment, often ending in death, on those who appeared to be immune to an epidemic of memory loss. The second focuses on the protagonist’s escape from the hospital in search of a woman she thinks is her mother. Like much of Van Den Berg’s work, there is an ethereal, fabulist quality to Joy’s journey (and this is a novel that is happy to reside in the ether of belief). And although Joy herself has not been afflicted by the strange memory loss, her journey is about reclaiming an uncertain and coveted past (and future), breathing it into life through hope and story.

Okay, there’s not really a central pandemic here, but I need to include this one for the short story lovers. As the title promises, there are a lot of narratives (some more traditional in arc than others) in this book and each showcases the genre blurring and defying acrobatics of Corin. The first part of the book comprises of three short stories with the latter half being taken up by the aforementioned apocalypses. What I love about this book is that many of the apocalypses don’t fall within the realm of zombies or viruses or asteroid impacts but are entirely mundane. There are divorces and breakups and family losses (outside of a pandemic) that are juxtaposed with the more stereotypical (but often self-aware and intentional) images of the post-end times. Many readers might come to a collection like this thinking they’ll read out of order. I don’t trust or like those people. Read as a whole, Corin gives us a kaleidoscopic and compounding vision of how the world and people react when the chips are down that is often both funny and heart wrenching.