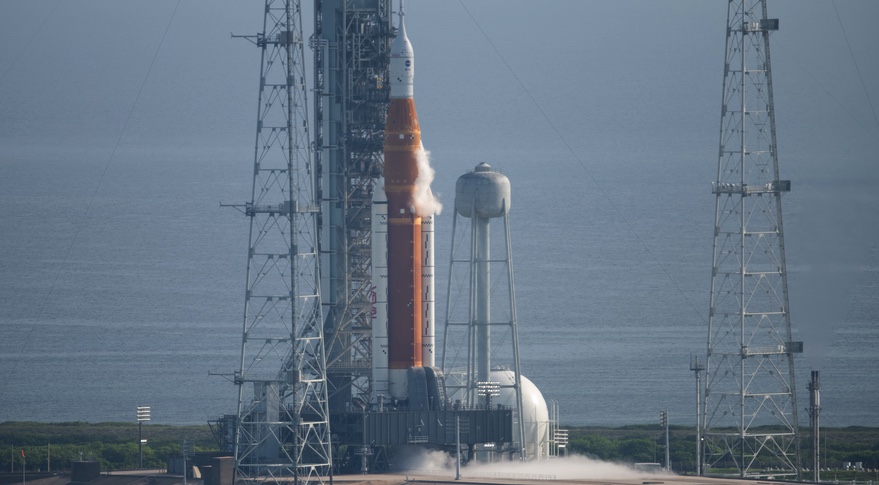 KENNEDY SPACE CENTER, Fla. — NASA called off a second attempt to conduct the inaugural launch of the Space Launch System Sept. 3 after failing to resolve a liquid hydrogen leak during fueling of the rocket, potentially delaying the mission until October.

NASA scrubbed the launch, which had been scheduled for a two-hour window that opened at 2:17 p.m. Eastern from Launch Complex 39B here, three hours before the window opened. Mission managers concluded that they had run out of time to fix a liquid hydrogen leak detected hours earlier.

Controllers noticed a leak in a quick-disconnect fitting for a liquid hydrogen line into the core stage of the SLS shortly after fueling of the core stage started. Engineers made several attempts to reseat the fitting, first by allowing it to warm up and then start flowing liquid hydrogen into it again, believing the temperature change would seal it into place again. It did not work.

A second technique involved stopping hydrogen flow and closing a valve, then using pressure from helium in ground systems to force the fitting back into place. That also did not work, as did a second attempt to warm and then cool the fitting.

The leak was a large one, said Mike Sarafin, NASA Artemis mission manager, exceeding a concentration limit of 4%, set by flammability risks, by a factor of two or three. The leak was much larger than one detected in the first launch attempt Monday, which was not a constraint for launch. “In terms of the leak that we saw on Monday, it was a manageable leak. This was not a manageable leak,” he said at a briefing several hours after the scrub.

One possible cause of the leak, he said, was an “inadvertent overpressurization” of the liquid hydrogen line just before fuel loading started, possibly caused by human error. That could have damaged the seal of the quick-disconnect fitting, but Sarafin added it was too soon to know.

Officials ruled out attempting a launch in the remaining days of the current launch period, called launch period 25 by NASA and which closes Sept. 6. “Launch period 25 is definitely off the table,” said Jim Free, NASA associate administrator for exploration systems development.

Those options largely revolve around whether the quick-disconnect fitting can be repaired on the pad or if the work needs to be done back in the Vehicle Assembly Building (VAB). An on-pad repair offers the possibility of completing the work sooner and to do testing the repairs using the pad’s liquid hydrogen, which is not an option in the VAB.

However, the rocket’s flight termination system (FTS) is certified only through the current launch window. NASA would need to seek an extension from the U.S. Space Force, which operates the Eastern Range, if it wants to keep the vehicle on the pad and allow for a launch as soon as late September. If the FTS certification is not extended, the vehicle would have to roll back to the VAB to check and replace its batteries.

“We don’t have an FTS waiver right now beyond 25 days. Until we have that, we have to roll back,” Free said. “We’ll work with the range to try and get that.”

Other issues about a stay on the pad include the effects of an extended stay on the pad on the Orion spacecraft. Tropical weather could also require the rocket to roll back regardless of any technical constraints.

“We need to look at exactly what work we need to do,” Sarafin said. “It’s a little bit early to say as to what the right path forward is.”

NASA Administrator Bill Nelson reiterated at the briefing that the agency would not attempt to launch Artemis 1 until they feel they are ready. He added he has not noticed any pressure, either from within the agency or from the White House or Congress, to launch the mission.

“If I knew about it, I would try to stop it,” he said. “But we have felt no pressure whatsoever.”