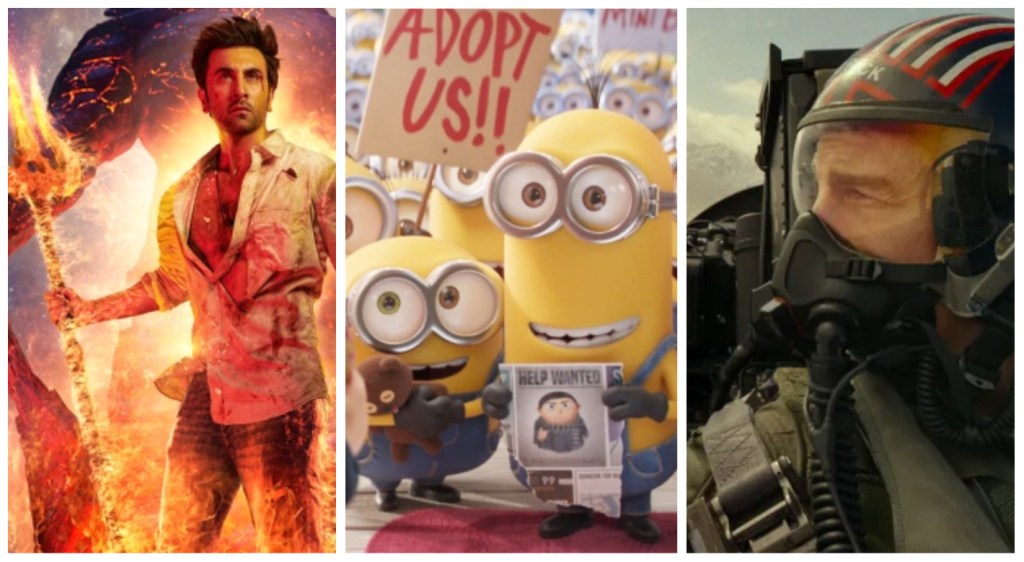 UPDATE, writethru: There was a little more excitement at the international box office this weekend, with local movies leading the charge and a handful of new milestones for Hollywood pics.

Taking the latter part first, Minions: The Rise of Gru crossed $900M global, Bullet Train drove past $200M and Top Gun: Maverick soared to $1.45B+ (see more below). For those keeping track of Jurassic World Dominion and its $1B hopes, the dinos are now at about $997M global.

Also, Sony/Marvel’s Spider-Man: No Way Home swung past $1.1B overseas, the 9th movie to crack the mark and only the 4th ever to do so without a China release. The overseas cume stands at $1,100.5M with worldwide at $1.914B, the 6th highest gross of all time.

Looking at the new titles in the mix, Dharma Productions and Star Studios’ Brahmastra Part One: Shiva — which Disney is releasing overseas in India and the UK — had an offshore weekend of $19.5M in just those markets. When adding in sub-distributed hubs, that rises to $22.1M. Globally, the launch session was $26.5M including domestic.

From director-writer Ayan Mukerji, and billed as India’s first original cinematic universe, the movie stars Ranbir Kapoor, Amitabh Bachchan and Alia Bhatt. It’s an ambitious proposition that didn’t really land with critics at home, but folks are turning up for the spectacle.

The IMAX component was integral here with the film posting the No. 2 biggest global debut for an Indian title in the format ($2M) and the 8th best of any film in IMAX in India.

Also in local news, Korea got back in the game this weekend with JK Film/CJ ENM’s detective action/comedy sequel Confidential Assignment 2: International. From director Lee Seok-hoon, it had the Chuseok holiday in the mix and grossed a strong $19.5M since releasing September 7. After a couple of fallow weekends at the Korean box office, this one was double the same frame in 2019, likely aided by the holiday.

Meanwhile, Universal/Illumination’s Minions: The Rise of Gru crossed $900M global on Saturday, becoming one of only 12 animated movies ever to the milestone, and the first since Frozen 2 in December 2019. It’s also the fourth film in the Despicable Me franchise to the mark. The worldwide cume through Sunday is $904M.

The international weekend was $5.8M in 84 markets, lifting the offshore cume to $541.6M, in line with the first Minions film and just off DM3.

In China, Rise of Gru remains the 2nd biggest imported animation of the year, only behind Universal’s own The Bad Guys. The Mid-Autumn festival is this weekend and cinemagoing has been impacted by the end of school holidays and increasing Covid-19 lockdowns across the country. Approximately 71% of cinemas are open as of last week, the lowest percentage since the end of May.

Also notable, Germany had Kinofest this weekend (tickets slashed to 5 euros). Rise of Gru reaped a 26% increase versus last session as it benefited from the scheme.

And even though it is in its 16th! weekend of release, let’s not forget Top Gun: Maverick. Paramount/Skydance’s Tom Cruise juggernaut piloted to another $4.6M in 62 markets this session, a drop of 23% from last. The international cume is now at $747.8M. That takes the global tally to $1,453.5M.

In IMAX, the global total is $108M, edging Mav closer to the No. 9 all-time result for the format.

With limited new play, Universal’s Julia Roberts/George Clooney romcom Ticket to Paradise started rollout in seven markets, including majors Spain and Brazil. Spain was a No. 1 launch with $800K, ahead of The Lost City while Brazil checked in at No. 2 with $700K, ahead of Bridget Jones’s Baby. Majors ahead include Germany, Australia and the UK next frame while rollout continues through early November.

18 Of The Best No Show Socks For Men That Stay Invisible and Comfortable (Updated 2022)
FBI seized almost 200,000 pages of documents from Trump at Mar-a-Lago, his lawyers say in new court filing
Senate confirms Saltzman as next chief of the U.S. Space Force
NASA to assess SLS work and next launch opportunities after rollback
Bottega Veneta Makes Clothes for Real Life