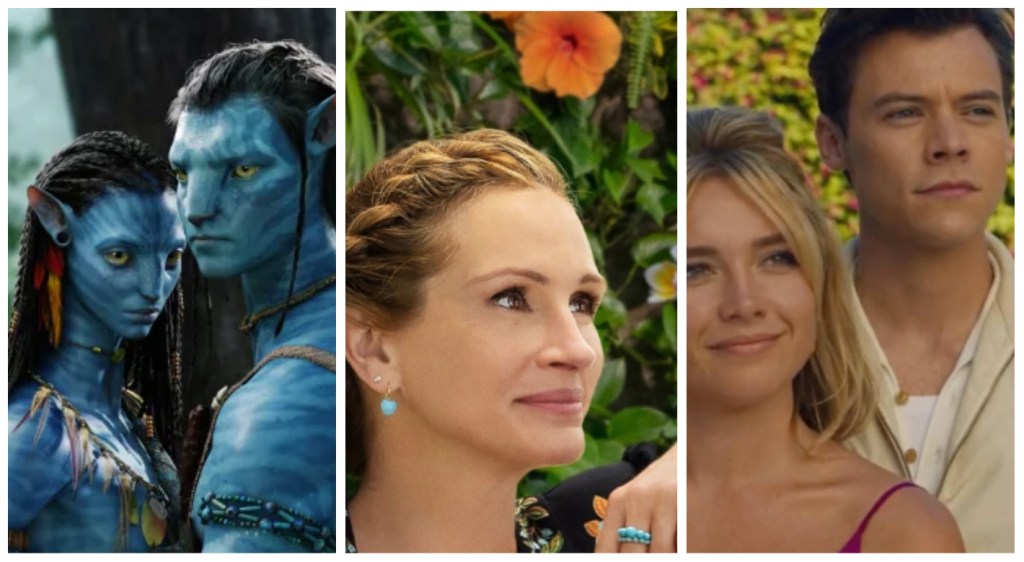 UPDATE, writethru: There was extra oomph at the international box office this weekend as Disney’s rerelease of 20th Century Studios’ Avatar grossed $20.5M from 50 offshore markets for a $30.5M global launch. The remastered 4K HDR version of the biggest movie ever was catnip to fans with No. 1s in several markets and, as designed, sets the table for James Cameron’s upcoming sequel, Avatar: The Way of Water.

Meanwhile, the other major newcomer, Warner Bros/New Line’s Don’t Worry Darling, came in at $30M global with the majority of grosses from domestic. Internationally, the Olivia Wilde-directed pic made $10.8M in 61 overseas markets. It was No. 1 in the UK ($3.1M) and ultimately came in amid expectations, but in general saw some Friday-Saturday drops after the Harry Styles faithful were first in line.

Before we dig into the nuts and bolts of the newcomers, another sign that the romcom business is buoyant with the right mix of stars is evident in Universal/Working Title’s Ticket to Paradise. The Ol Parker-directed film is in its third weekend of early offshore rollout and continues to hum along, adding $11.1M this frame to reach a cume of $31M to date. It’s already running ahead of The Lost City by 8% well before domestic opens on October 21.

Now, turning back to Avatar, as we noted coming into the weekend, this release is icing on the cake for the globe’s biggest grosser of all time. It’s
also good news for exhibition during what has been a prolonged fallow period, and it’s a means to promote Way of Water, particularly with a focus on 3D.

Cameron himself posted a message on Twitter this weekend talking up the remaster and the surprises.

It’s time to see #Avatar the way it was meant to be seen. Experience it back in theaters now with a special surprise 👀

Fans were definitely into the 3D of it all, with an average 75% of tickets sold in the format (also from 4D/IMAX). As a comparison, Avengers: Endgame was around 27%. In some markets, like Japan and Korea, 3D was as high as 100%. Korea notably saw a 150% hike on Saturday, demonstrating that the movie wasn’t frontloaded. The rerelease also served as a test run for the technology — down to making sure there were enough glasses on hand and all the projectors were in place.

IMAX generated $6M globally with $3.1M from offshore on Avatar. The format saw an oversized portion of the nationwide box office in markets like UK (19% from 51 screens), Japan (38% from 41 screens), Korea (40% from 19 screens) and France (10% of admissions from 17 screens). With this weekend’s number, Avatar widened its lead as the highest grossing IMAX movie of all time, now with $264M in lifetime box office.

In like-for-likes, the debut weekend was 37% ahead of Star Wars: Episode 1’s 2012 3D rerelease and 19% below Titanic’s which opened during the Easter holidays.

Avatar had initially been set for a limited two-week engagement, but could stay in cinemas longer (the reissues of Titanic and Phantom Menace ran for multiple weeks back in 2012), but the idea is also not to butt directly up against Way of Water which starts rollout overseas on December 14 before landing in North America on December 16.

DWD meanwhile debuted in 61 markets including majors France, Germany, Italy, Spain, UK, Brazil and Mexico and repping roughly 80% of the international landscape. In like-for-likes, it paced 27% above A Simple Favor, 59% over Old and 77% ahead of Where the Crawdads Sing.

Italy was a No. 2 start behind Avatar at $979K and ahead of A Simple Favor, Old and The Black Phone. Mexico’s $971K was good for third place and above comps Old, A Simple Favor and Crawdads. France grossed $885K at No. 2 (though a clear No. 1 in Paris); above comps and with a good AlloCiné rating of 3.7 out of 5. Germany took in $625K at No. 3, on par with Crawdads and ahead of Old, Nope and The Black Phone.

Still to come are Australia, Japan and Korea.

In holdover play, Ticket to Paradise notably had its UK launch which had been delayed owing to the funeral of Queen Elizabeth II. Including Tuesday-Thursday previews, the gross was $3.2M from 695 locations. The opening, excluding previews, is in line with The Lost City and Crazy Rich Asians. George Clooney, Julia Roberts, Kaitlyn Dever, Maxime Bouttier, Lucas Bravo, Billie Lourd and director Ol Parker all attended a world premiere at the the Odeon Luxe Leicester Square to generate buzz.

Australia, boosted by holidays this weekend, has grossed $5.2M after two frames. In Germany, Roberts and Clooney held the No. 1 spot, above both Don’t Worry Darling and Avatar, reaching a $4M cume in the sophomore session, ahead of The Lost City, Yesterday and House of Gucci at the same point.

Spain, in its third frame, reached $2.5M, in line with The Lost City, while Brazil’s $2M running total topped The Lost City, House of Gucci and Last Christmas. It is now the No. 1 romcom since the start of the pandemic.

The movie is tracking ahead of expectations and has strong word of mouth ahead of its October 21 domestic start.

Warner Bros’ DC League of Super-Pets for its part added $4M from 72 markets as it nears $100M overseas with $95.8M through Sunday. The global cume is $185.9M. Benefiting from holidays, Australia saw a great 57% bump for a running cume of $5.3M. New Zealand bowed to $286K, including previews, on 96 screens, and ranking No. 2 behind Ticket to Paradise. The debut is 55% ahead of The Bad Guys which opened on Easter weekend.

As for next session, after a very slow several weeks, China will ramp up with the National Day holiday. Due for release on September 30 are Alibaba’s Born to Fly, Bona’s Ordinary Hero and Huace’s Homecoming.

Elsewhere, Lyca Productions’ Tamil-language Ponniyin Selvan: I debuts in India, the UK and North America while Sony’s The Woman King heads to France and 13 other markets.