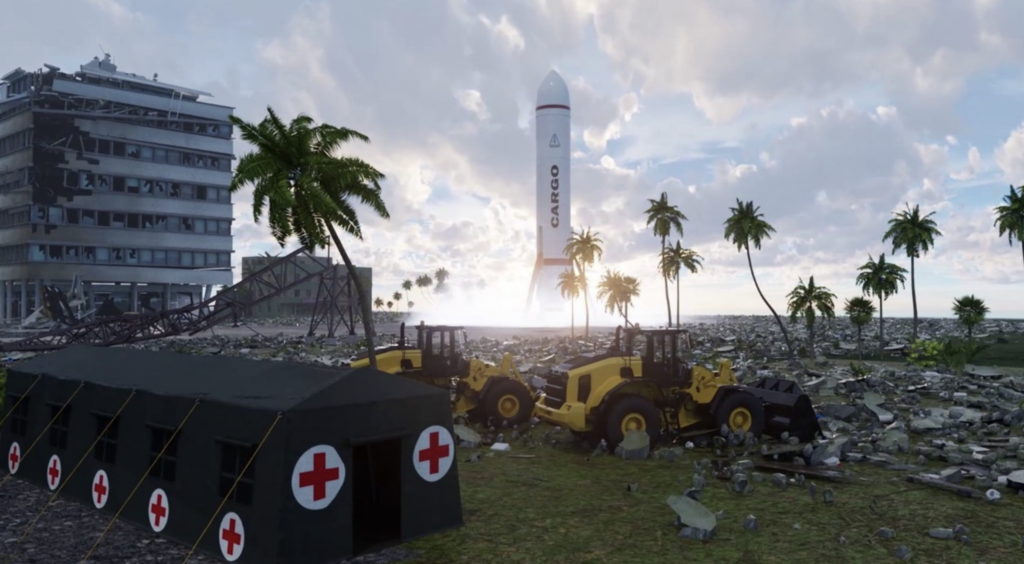 U.S. TRANSCOM, which manages the movement of military personnel and cargo around the world, over the past two years has signed cooperative research and development agreements, or CRADAs, with five space companies — SpaceX, Blue Origin, Sierra Space, Virgin Orbit and Rocket Lab — to investigate potential concepts for using space vehicles in military logistics and humanitarian relief operations instead of aircraft.

During a call with reporters Oct. 14, Van Ovost said the command is enthusiastic about the “rocket cargo” program led by the Air Force Research Laboratory.

The CRADAs allow the exchange of data between the companies and TRANSCOM but so far it’s unclear when the industry will be ready to demonstrate cargo delivery capabilities, she said.

“We obviously would like some sort of a demonstration launch,” said Van Ovost. “I think that would be very helpful to gather the data on what worked or not,” she added. “I am quite excited to move forward.”

Any future rocket cargo demonstrations will be organized by AFRL. The lab earlier this year awarded SpaceX a $102 million five-year contract to demonstrate technologies and capabilities to transport military cargo and humanitarian aid around the world on a heavy rocket. But AFRL has yet to announce any planned demonstration.

The first CRADA was signed with SpaceX in March 2020, and the Air Force in June 2021 designated rocket cargo as one of its “vanguard” programs. Enthusiasm for the program grew after SpaceX CEO Elon Musk unveiled the Starship megarocket designed to carry humans to the moon and Mars but also possibly for point-to-point transportation on Earth. The vehicle is still undergoing testing and has not yet flown an orbital mission.

“Based on advertised commercial capability and business objectives, the Air Force Research Laboratory is currently assessing emerging rocket capability across the commercial vendor base, and its potential use for quickly transporting DOD materiel to ports across the globe,” AFRL said.

Van Ovost said space transportation would be a fundamental shift in the way DoD could respond to contingencies and disasters, adding a new tool to existing air, land and sea delivery.

“This is a very exciting area,” she said. “We signed five CRADAs because each of these companies are taking essentially a different approach at how they might do point to point, so we have something to learn from each of these different companies.”

The agreement with Rocket Lab, for example, will explore using the company’s Photon spacecraft to establish on-orbit cargo depots and provide re-entry capability.

Van Ovost said it’s important for TRANSCOM to be included and to shape concepts for cargo and passenger transportation, “whether it’s something that’s going to stay in space for a while and deorbit or something that’s really going to go point to point.”

A key goal is to understand “the art of the possible” and what each company would need to do to carry out a mission. “In the end, we have to make a decision not just based on how fast something can launch, but it’s the entire chain. What kind of packaging? How do I get it to a location? And how is it loaded and unloaded at the end?”

How To Tie A Bow Tie: Simple Steps And Instructions 2022
Selena Gomez Shares Photo of Her Hang Out With BLACKPINK
Meta Allows Quest VR Headset Usage Without Facebook Account As Firm Bows to German Regulator
13 Adorable Nicknames Couples Have For Each Other
Jennifer Lopez Announces First New Album in Nine Years, This Is Me… Now