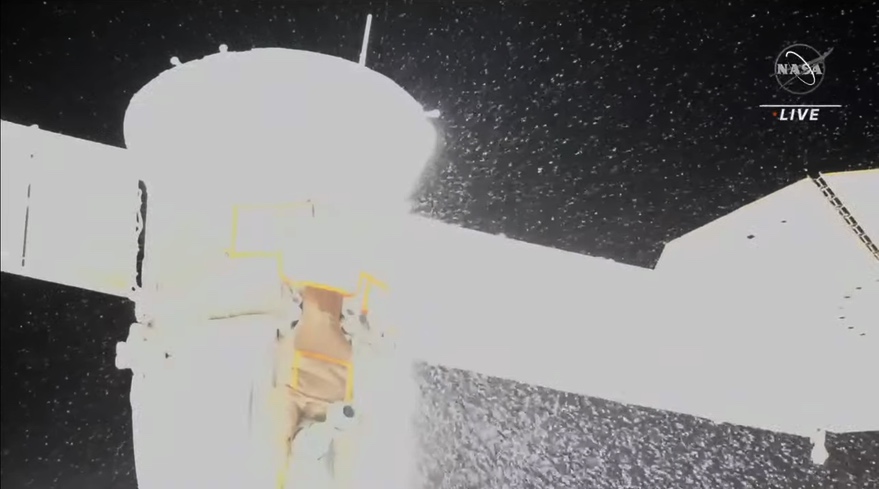 WASHINGTON — A coolant leak in a Soyuz spacecraft docked to the International Space Station Dec. 14 forced flight controllers to cancel a Russian spacewalk there and raised questions about the spacecraft’s ability to return to Earth safely.

Cosmonauts Sergey Prokopyev and Dmitri Petelin were preparing for a spacewalk when station controllers noticed a coolant leak in the service module of the Soyuz MS-22 spacecraft docked there at approximately 7:45 p.m. Eastern. That spacecraft delivered Prokopyev and Petelin, along with NASA astronaut Frank Rubio, to the station nearly three months ago.

The two cosmonauts continued their spacewalk preparations but remained in the airlock as engineers on the ground assessed the problem. Their seven-hour spacewalk was scheduled to begin at about 9:20 p.m. Eastern, but was delayed and ultimately canceled shortly before 10 p.m. Eastern. The leak, visible as a stream of particles from the Soyuz, was visible more than three hours after it started in NASA TV coverage.

“The best plan of action tonight was focus all of our Moscow team’s attention on sorting out what’s going on exactly with the Soyuz spacecraft and then we’ll regroup tomorrow,” Emily Nelson, NASA chief flight director at the Johnson Space Center, said in comments on NASA TV around midnight Eastern.

The Russian space agency Roscosmos, in a brief statement Dec. 15, said there was “damage to the outer lining” of the service module of the Soyuz, but didn’t offer more details on the problem. Roscosmos said a third Russian cosmonaut on the station, Anna Kikina, used a robotic arm to perform a photographic inspection of the spacecraft, returning those images to Earth for analysis.

Both the cause and the severity of the leak are unclear. The leak did not pose any immediate risk to the station and its crew, but in a worst-case scenario, it would render the Soyuz spacecraft unable to return to Earth safely with its crew.

Roscosmos could launch the next Soyuz to the station without any crew on board as a replacement, but it’s uncertain when the spacecraft, Soyuz MS-23, could be prepared for launch, and doing so would affect future crew rotations. Soyuz MS-23 is currently scheduled to launch to the station in March 2023 with two Roscosmos cosmonauts and one NASA astronaut.

The risk of a problem with either Soyuz or U.S. commercial crew vehicles is a major reason why NASA had, for years, sought to exchange seats between such spacecraft in a barter arrangement. That would mean there would be at least one NASA astronaut and one Roscosmos cosmonaut on the station at any time should either Soyuz or commercial crew vehicles be out of service for an extended period.

After extensive negotiations, NASA and Roscosmos completed the seat barter agreement in July. Rubio flew to the station on Soyuz MS-22 in September and Kikina on the SpaceX Crew-5 Crew Dragon mission in October, becoming the first Russian cosmonaut to fly on a commercial crew vehicle. The current agreement includes seat barters on Soyuz and Crew Dragon missions scheduled for the spring and fall of 2023.

The leak marked the second consecutive postponement of a spacewalk by Prokopyev and Petelin, intended to move a radiator from the Rassvet module to the Nauka module on the station. Roscosmos called off the first attempt at the spacewalk Nov. 25 because of a problem with a pump in one of the spacesuits.