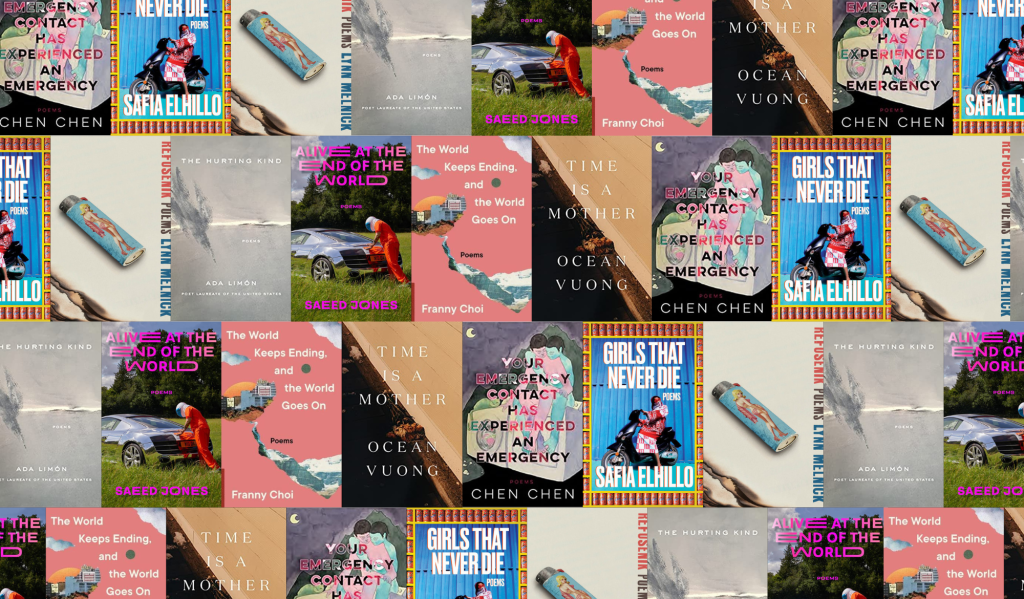 There’s no denying that this has been an exceptional year for poetry. Throughout 2022, we’ve read intimate, lyrical, political poetry that has experimented in all areas of craft, most notably form. But what has been, perhaps, most exciting, has been the return of many of our most well-loved masters, all of whom have managed to reinvent themselves for an ever-shifting world. Exploring themes like grief, the apocalypse, and crossing over into the spirit realm, this year’s poetry collections transported and transformed us, and we will never again be the same.

The Top 3 Poetry Collections of The Year:

Your Emergency Contact Has Experienced an Emergency by Chen Chen

Chen Chen’s much-lauded second collection is precise and timely, exploring what family means as a queer Asian American living through a pandemic, a rise in anti-Asian hate crimes, and the legacy of Donald Trump through the inventive figure of a switchboard operator, picking up calls. In Chen’s hands, grief ripples with anger and humor, carving space for an intertwining of emotions that matches his formal versatility. Read his conversation with Austin Nguyen about the politics of grief and making angry art here.

The Hurting Kind by Ada Limón

Current U.S. poet laureate Ada Limón’s highly-anticipated sixth poetry collection is about the connectedness of everything—past and present, human and animal, self and other. A cry for coming together in dark times, Limón frames this not as new knowledge, but as something deep we’ve known all along. As Limón said in her conversation with Angela María Spring, “I think so much of our lives are spent searching. I think if this book is saying anything, if it’s saying anything to me and saying anything to my readers, it’s that: we don’t need to look, it’s already there.”

Time is a Mother by Ocean Vuong

Grief is both form and content in Ocean Vuong’s second poetry collection, Time is a Mother, which follows his success as both a poet and novelist. Vuong’s poems search for meaning, wondering what poems can offer in the waves of grief after his mother’s death, and aren’t afraid to go to the limit of meaning. These poems are raw and dark, following the aftershocks of loss, but still offer snatches of light: beauty, sex, humor, and joy all emerge within the darkness, part of not just grief, but life.

Alive At the End of the World by Saeed Jones

Saeed Jones’ newest collection, Alive At the End of the World, centers on the danger and ordinariness in the white supremacy and time of precarity we are living in. The grief he writes is intimate and personal, but Jones also insists that there’s a collective grief, one he marks with pop culture allusions and a keen attention to the artifice of America. His poems remind us that we live in the apocalypse, but they force us to remember—at least we’re alive.

Balladz showcases the range of Sharon Olds, from her distinct long sentence rhythm to a central section of poems called “Amherst Balladz,” a tribute to Emily Dickinson. She opens with a section of quarantine poems, a song of collective grief, but the whole collection follows the fragility of life, the acceptance of aging, and the reckoning of America.

Novelist and memoirist Akwaeke Emezi’s debut poetry collection, Content Warning: Everything, centers a bold and spiritfirst perspective on the world. Emezi’s poems center the irreducible essence of the self that survives, morphs, and above all, desires.

Customs centers the bureaucratic checkpoints of America, the strictures of both the nation state and the English language. Sharif’s collection asks what it means to exist in the liminality of the arrivals terminal, to find yourself limited by the space and its imaginative possibilities, and  writing towards freedom.

Safia Elhillo’s poems explore Muslim girlhood and shame, exploring her own history alongside the larger cultural legacy of violence against women. Girls That Never Die looks at the violence and trauma of growing up as a girl in patriarchal society, but Elhillo imagines a world of rebellion and autonomy right alongside these pains.

In the Hands of the River by Lucien Darjeun Meadows

In the Hands of the River, a debut collection by Lucien Darjeun Meadows, shows the wildness of growing up in Appalachia and subverting our dominant narratives of the region. Meadows plays with poetic forms to show a queer boy of Cherokee and European heritage coming of age, reckoning with personal and collective trauma, and showing how interconnected both human and environmental identities can be. Check out Meadows’ list of writers who find queer kin in the natural world.

Nina Mingya Powles’ debut collection Magnolia pushes the limit of poetry to explore the memories and experiences of a mixed-race girlhood. Powles draws from a wide archive, from movies like Mulan or In the Mood for Love to theories of translation, showing the many facets of a person, and the nuance needed in language to preserve that complexity. Read Powles’ reading list of books about multiracial experience, written by biracial Asian writers.

Elisa Gabbert’s fifth poetry collective is playful and perceptive. Her poems have fun with language, juxtaposing the ordinary and the metaphysical, interrogating a phrase until its meaning completely changes. Normal Distance is delightful, surprising, and totally thought-provoking.

In her third poetry collection, Lynn Melnick reckons with a legacy of anti-Semitism and misogyny, writing with her signature wit and candor. Refusenik highlights pain and beauty together, showing the collectivity of grief and the need for fiercely feminist narratives. Refusenik was featured in our reading list of 7 Feminist Poetry Collections About Gender and Identity.

Smoking The Bible by Chris Abani

In Smoking the Bible, Chris Abani moves between his Igbo ancestry and his migration to the United States through poems that show the personal story of two brothers, one memorializing the other through writing. Abani’s poems are arresting and commanding, showing a spiritual reckoning and the story of a man in exile.

The Call-Out by Cat Fitzpatrick

Cat Fitzpatrick’s genre-bending “novel in verse” about queer (mostly trans) women is an homage to the Pushkin’s Eugene Onegin, but set in contemporary Brooklyn. The weapon at these women’s disposal is a charged one–the internet call out, a symptom of cancel culture. At stake is the precarity of a marginalized community, a picture developed in dark and hilarious rhyming form.

The Rupture Tense by Jenny Xie

Jenny Xie’s latest collection showcases the bleed of memory, what traumatic and joyful experiences cross the boundaries between past and present. The Rupture Tense begins with poems that respond to photos of the Chinese Cultural Revolution, and the collection ends with an elegy to Xie’s grandmother, who died after the end of the revolution. In deft and formally ambitious poems, Xie shows us the ruptures and aftershocks of history that continue to affect us.

The Symmetry of Fish by Su Cho

Su Cho’s debut poetry collection follows a coming-of-age in the middle of America. The lyrical and vivid poems in The Symmetry of Fish examine the inheritance of language, particularly in immigrant families. In Cho’s collection, language and memory never get lost, but continually remade—dwelling in the details we might otherwise brush aside.

The Trees Witness Everything by Victoria Chang

In her latest collection, The Trees Witness Everything, Victoria Chang plays with form, mostly the Japanese form of “wakas,” shaping each poem by pattern and count, and borrowing titles from W.S. Merwin’s poems. But the strict constraints of these poems point to more than Chang’s inventiveness. Despite the forms and structures of these poems, what emerges is an appreciation for the wildness of the mind, the freedom of a wandering mind and memory.

The World Keeps Ending, and the World Goes On by Franny Choi

Franny Choi’s third collection, The World Keeps Ending, and the World Goes On, begins with the proposition that for people of color, the apocalypse has already happened. These poems interrogate and imagine how to live in this ceaseless dystopia, spinning backwards and forwards in time to imagine opportunities for connection in the midst of grief and distance.

Togetherness by Wo Chan

This highly praised debut collection from nonbinary poet and drag performer Wo Chan highlights moments of queer childhood and adolescence. Togetherness centers on Chan’s memories from the kitchen of a Chinese restaurant to a family deportation battle against the State, weaving in letters in support of their family’s immigration effort. Chan’s daring and original poems show the necessity of survival, even when confronted with the precarious and destructive powers of the nation-state.

Woman Without Shame by Sandra Cisneros

We haven’t gotten new Sandra Cisneros poems in almost 28 years, and Cisneros’ return to the genre with the collectionWoman Without Shame makes it worth the wait. These reflective poems are candid and unapologetic. Cisernos blends English and Spanish to reflect on aging, sex, and politics with precise and lyrical attention.