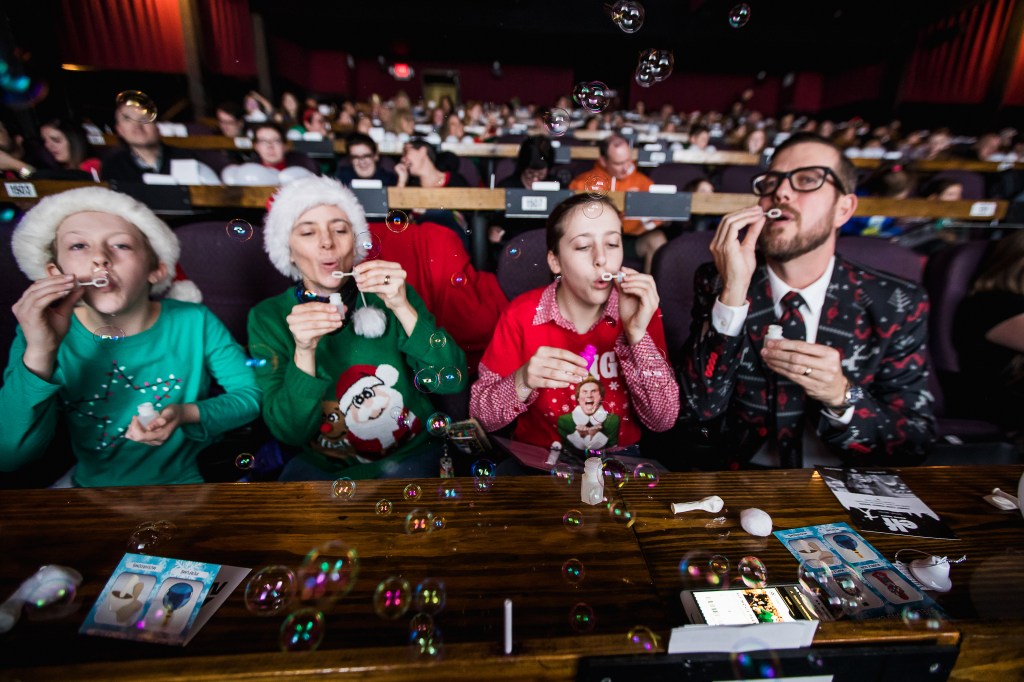 Repertory fare has been crucial for theaters weathering Covid and a choppy recovery. The story of the misfit, too-tall mediocre toymaker Buddy, who sets out to find his real dad, is the gift that keeps on giving. “Elf is by far the leader. We have been doing it for years. Our only question is how early can we play it. Each year, it’s a little earlier,” Smith said. This fall, it rolled out on November 4 at the Texas-based chain’s Corpus Christie theater to play at all of its 38 locations. This year, Alamo Yonkers is the top Elf grosser with $21.7k on its own, and the chain has eight of the top ten theaters nationally for Elf.

Shows start filling up within days of putting them on the website, a month or more ahead and with no advertising. “We’ve joked about it every year, but we might wind up just putting some shows on sale for the following year. Like [live] theater tickets.”

Alamo first brought the film back as a holiday special in 2007, four years after its initial release. It became a staple by 2013. The chain ran Elf as it could in Covid-wracked 2020 but without the watch parties. It held just a few last year. So 2022 is a reunion. Sales from 335 shows are at about 130% of 2019. “This was a good year for it,” Smith said. “It’s people wanting to get back to something familiar. And people wanting to get back to see movies in theaters.”

According to Bloomberg, some 150 Christmas movies will have premiered on television and streaming platforms from this November through December. “You could get a bunch of folks on a couch. But they’re looking for the collective vibe with a Santa hat and an elf hat,” said Smith. “If we’d had more locations, we would have added shows. We hit capacity.” Next year, the film’s 20th anniversary, “will be even bigger.”

Jeff Goldstein, president of domestic distribution at Warner Bros, called Elf – which has grossed close to $173 million domestically — “one of the evergreen properties that keep doing really strong business.” He expects to end the year with about 3,700 bookings, “not bad for a movie that’s 19 years old.”

The film attracts all ages, young to old. Smith calls it “snarky and very watchable, whether you’re a Christmas person or also if you’re not. It’s a funny Will Ferrell performance.”

“My father didn’t make master tinker until he was 490!” Buddy encourages a depressed burnout working in the mailroom of a publishing company.

Alamo, which tends to draw coveted younger demos, is lauded by distributors as being among the most effective and innovative with bars, food service and themed theaters from Kung Fu to printing presses to aviation. Turning cinemas into destinations is crucial as exhibition fights for audiences. Alamo plays a mix of wide releases, arthouse films and repertory fare.

The latter, from holiday, horror, classics and curated series, is increasing key for programmers as the lag effect of production bottlenecks from Covid means many fewer film releases than in pre-pandemic years. Audiences used to streaming have also become more selective. Smith said repertory makes up about 6% of Alamo’s annual revenue on average, with big swings. It reached 15% of total business during an August/September lull. And the weekend before last, it was a “crazy high” 26% — with Elf alone over 10% — in the run-up to Avatar: The Way of Water.

Chains from Cinemark to the nation’s biggest AMC Entertainment all play Elf. AMC put it first on the list touting its lineup of $5 Holiday Fan Faves showing from from December 2-14 twice a day in at least 300 locations. It was followed by National Lampoon’s Christmas Vacation, Best Man Holiday, How the Grinch Stole Christmas and The Polar Express.

Alamo, however, boasts the biggest Elf market share this year at circa 17.4%.

Goldstein said The Polar Express, Christmas Vacation and Gremlins are other popular studio holiday rereleases. “But Elf is the top.”

‘Everything Everywhere All At Once,’ ‘Women Talking’ Among Oscar Best Picture Nominees Rallying At Weekend Box Office
Hasbro warns of weak holiday quarter results, cuts 15% of its workforce
Fire-Boltt Talk Ultra Smartwatch With 123 Sports Modes, Bluetooth Calling Launched in India: Details
5 Expert Tips on How to Clean Suede Shoes at Home in 2023
A Complete Timeline of Rihanna and A$AP Rocky’s Relationship