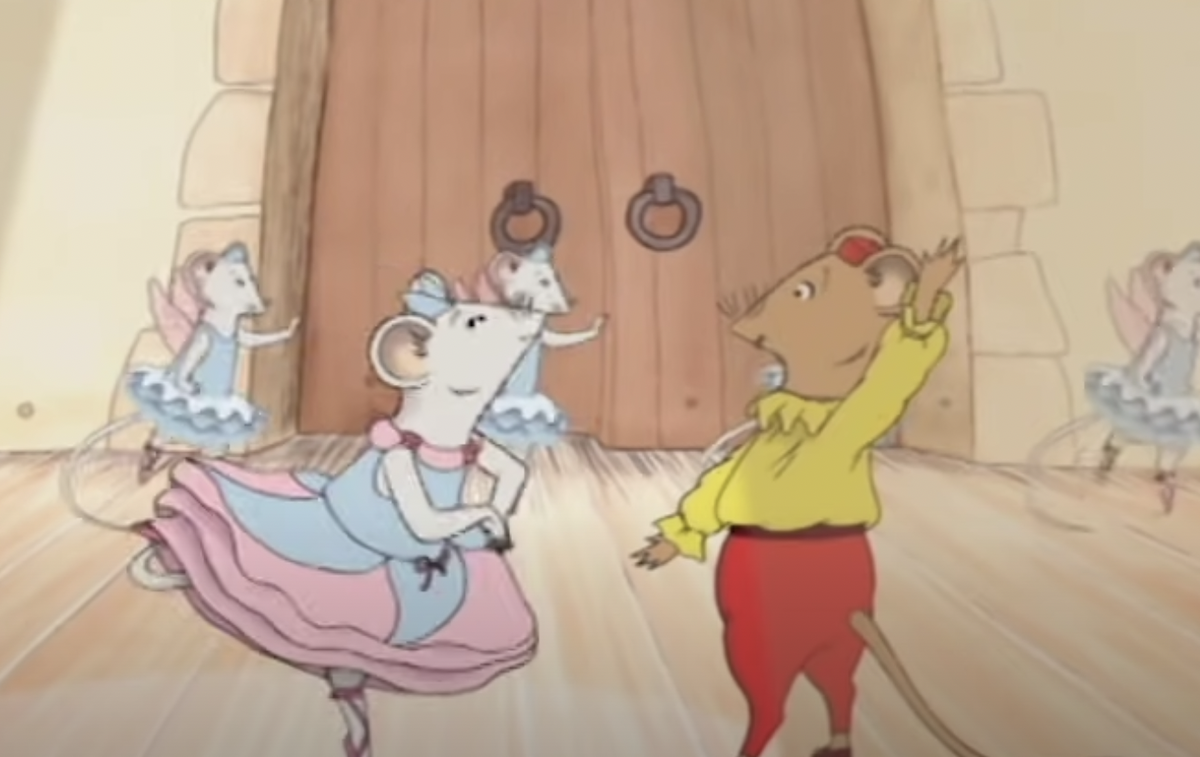 I’m Angelina Jeanette Mouseling from Chipping Cheddar, UK, born in 1983. Better known as Angelina Ballerina, I’ve danced ballet my whole life. My life story has been made into an award winning set of childrens’ books and TV series. I have a nut to crack with The Nutcracker Ballet.

I’m a mouse. The Nutcracker has always been set against mice. Why? I have no idea. Without us there’s no conflict, no tension, and yet all anyone ever talks about is Clara and the Prince.

The plot itself is completely unbelievable. In Act One the mice attack the Nutcracker (who turns into a Prince???) for absolutely no reason. I’ve never seen a mouse attack a human in my entire life, let alone attempt to eat royalty. Are you aware of our diminutive size?

Once the mice are defeated, we’re never seen, or heard from, again. There isn’t a single mouse in the entire second half of the ballet. Whatever…

Then there’s the tiny problem of typecasting. At first I set my sights on landing the part of Clara, but after years without a callback, I moved on. I thought MAYBE the Sugar Plum Fairy was within reach. But no, I kept getting feedback that I was too little.

And it’s not just me! Do you know how many of my mouse friends have worked their whole lives, climbing up the ranks through the corps de ballet, only to be cast as Mouse #3 over and over again?

I’ve advocated for mice in starring roles throughout my career with no success outside of productions for mice by mice. For example my best friend Alice Nimbletoes, the talented gymnast, has never been a lead for a human audience. My rivals, the twins Priscilla and Penelope Pinkpaws, despite being Miss Lilly’s favorites, haven’t made it into leading roles either. Alice is a mouse of color, and the Pinkpaws twins aren’t always the nicest but still, none of us have ever been able to cross over.

The only time we’ve been given a human audience is in my books and TV shows, because children, unlike adults, are able to appreciate us. I mean, look at our ingrained flexibility! Whiskers provide balance and our miniscule mouse skates are perfect for dancing on point! But God forbid we take a role from a human.

The Nutcracker is the perfect ballet for mice to have our first big break, especially since we are so crucial to the storyline, but alas, we’ve never been cast.

Meanwhile, Billy Elliot gets a starring role as a swan—but then again, haven’t you heard about the mythical white man? He can shapeshift into anything, all it takes is imagination!

No, I’m not bitter or anything. Absolutely not bitter.

And we need to talk about the treatment of women in The Nutcracker. Has anyone but me realized that Clara is a minor when she’s sent off to the Land of Sweets with a man twice her age???

Have you heard of consent? Herr Drosselmeyer’s doesn’t count.

Also there’s a real lack of character development. At least in my books I have a goal, face obstacles, and always learn a lesson at the end. I can’t think of a single thing Clara learns, except how to marry a Prince (which isn’t even that hard—look at Megan Markle.) Let’s not even consider the idea that the Prince—a man!—has anything to learn from all this.

And someone needs to inform PETA about the treatment of animals onstage. In the Dance of the Phoenix, the bird is kept in a cage and only let out for a five minute solo. I’ve heard there’s even a Seattle-area production with a tiger on a leash.

The Nutcracker was invented in 1892 and in 130 years nothing has changed! Even the music is the same, and it was taken from Tchaikovsky! I’m going to ask an honest question here: is there anything original in The Nutcracker that wasn’t stolen from someone else?

Don’t get me wrong, The Nutcracker Ballet was, and always will be, my first love. That’s why I’ve finally had it. I’ve danced my heart out for decades, and now it’s time to say something.

As a memoirist whose audience has always been children, a lot has changed since my books were written. The time has come for us to reckon with our anti-rodent past and address the corresponding inequities in ballet. If only we could treat all animals, oppressed people, and minors with the same amount of respect and autonomy, The Nutcracker might actually deliver on its vision of a land filled with goodness, where everyone has the chance to achieve their dreams. Personally, I believe audiences would eat it up.

The TikTok-Viral UGG Minis That Hailey Bieber’s Obsessed With Are Back in Stock
Nina Simone Reminds Me to Suffer No Fools
‘BTS: Yet To Come’ Sings Green On Screen – Specialty Box Office
Amazon is shutting some Fresh and Go stores as the company cuts costs
Biden administration expands EV tax credits in boost for Tesla, Cadillac, others