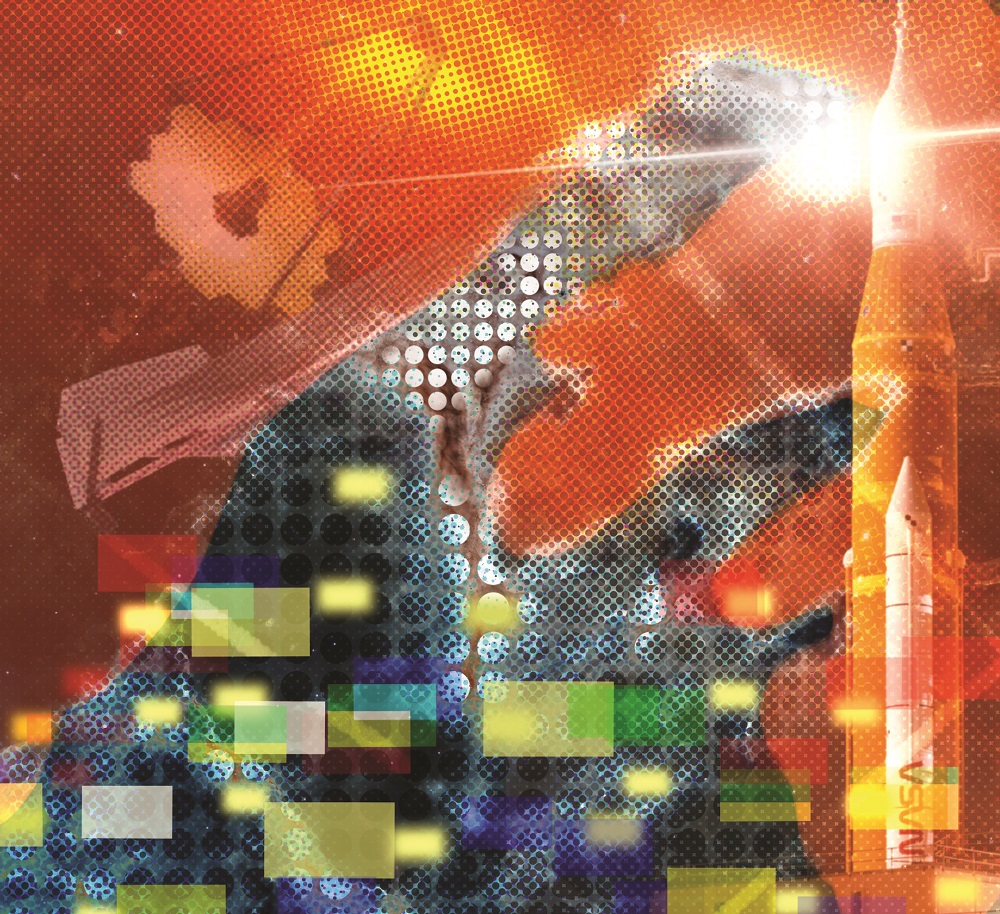 Ukraine and Elon Musk weren’t the only big stories of 2022. These seven commanded our attention with actions that will reverberate well into 2023.

For most of the last decade, the James Webb Space Telescope and the Space Launch System were albatrosses around the neck of NASA. They were years behind schedule and billions of dollars over budget, a situation so bad that Congress threatened JWST with cancellation. They suggested NASA had lost its ability to do big, complex projects.

But even albatrosses can take flight. Last Christmas Day, JWST finally launched on an Ariane 5 from French Guiana. The spacecraft then flawlessly carried out the complex deployment of its mirror and the sunshield that keeps the spacecraft cold enough for its infrared instruments to operate. In July, after astronomers completed calibration of those instruments, NASA released the first, stunning images from JWST, to worldwide acclaim.

On Nov. 16, SLS finally got off the pad, figuratively and literally. The rocket overcame last-minute difficulties that included hydrogen leaks during earlier launch attempts and hurricanes that lashed the Space Coast (see SLS showed up, at last, page 6). It successfully sent an uncrewed Orion spacecraft toward the moon on the Artemis 1 mission, performing within 0.3% of predictions. “The results were eye-watering,” said NASA mission manager Mike Sarafin several days after liftoff.

In both cases, success wiped away the criticism both JWST and SLS had faced because of their cost and schedule overruns: all’s well that ends well, perhaps. They anchored a standout year for NASA that included other successes, like the DART mission’s successful collision with an asteroid.

But JWST and SLS may diverge in the years ahead. JWST will provide a steady stream of images and data for up to 20 years, revolutionizing astronomy and helping people forget its challenging development. SLS, though, won’t fly again until the Artemis 2 mission in late 2024 — assuming there are no further delays.

China’s space program advanced at an impressive pace in 2022.

The first full crew of six astronauts reached the recently completed Tiangong space station in late November in preparation for the start of science operations.

China also expanded its fleet of Yaogan spy satellites, flew a reusable spaceplane, tested a reusable rocket, revealed plans for a nuclear-powered lunar base and conducted far more orbital launches in 2022 than any nation except the United States.

Concerns about China’s prowess in rapidly adopting commercial space technology are spurring increased investment and support for startups, established firms and government space programs in the United States, Europe and around the world.

ESA Director General Josef Aschbacher did not get all the money he wanted at the agency’s ministerial council meeting in November but still managed to secure a major budget increase.

ESA’s 22 member states approved 16.9 billion euros ($17.7 billion) for the next three years, a 17% increase over the previous budget adopted in 2019. While that was less than the 18.5 billion euros Aschabcher sought, Aschbacher said the funding was enough to continue all ESA’s major programs in exploration, Earth observation, launch vehicle development and more.

ESA got that funding despite various challenges in Europe, including high inflation, an energy crisis and the war in Ukraine. Aschbacher turned those problems into opportunities, arguing they demonstrated the need for a strong and independent space program. European governments, wary of past reliance on Russia, went along.

Jessica Rosenworcel is simultaneously raising the profile of space within the FCC and the FCC within the space industry.

In November, Rosenworcel, chairwoman of the FCC, announced plans to create a new Space Bureau within the agency. Space topics, like licensing satellites, had for decades been a part of the FCC’s International Bureau, but she argued the proposed reorganization would free up resources to address the growing number of satellites, particularly in broadband megaconstellations. “You can’t just keep doing things the old way and expect to lead in the new,” she said in a speech announcing the proposed reorganization.

A little more than a month earlier, Rosenworcel and her fellow commissioners voted unanimously on a new rule for deorbiting satellites. Under the new rule, which takes effect in September 2024, satellites in low Earth orbit that were licensed or granted U.S. market access by the FCC will have to deorbit no more than five years after the end of their missions, down from the previous guideline of 25 years. The change, she said, was designed to reduce the risk of collisions that could exacerbate the growing orbital debris problem in LEO.

Both moves show that the FCC wants to take a bigger role in commercial space regulation. Industry has welcomed some of those efforts, including the proposed Space Bureau, which Rosenworcel announced at an event organized by the Satellite Industry Association. The reorganization, they said, could help not just licensing activities but also preparations for next year’s World Radiocommunication Conference, whose agenda will include topics involving access to spectrum for space services.

Some, though, are wary of other efforts, including the new deorbiting rule and recent dockets on FCC roles in the satellite servicing field. They worry the FCC could be seeking to expand its role even as the National Space Council develops its own approach to overseeing new space activities. Rosenworcel said in November that the new Space Bureau is focused on existing FCC responsibilities, not new ones, at least for now.

Globalstar chairman Jay Monroe’s bet on the satellite operator he helped buy out of bankruptcy nearly two decades ago hit the jackpot with a high-profile Apple collaboration this year.

The world’s most valuable tech giant plans to invest nearly half a billion dollars in upgrading Globalstar for the mainstream as it embeds the constellation into one of the world’s most popular smartphones.

The investment transforms Globalstar from a voice and data services provider for niche mobile devices into a company underpinning the latest chapter in Apple’s international growth strategy.

And that’s not just good news for Globalstar. The tie-up with Apple is pioneering a direct-to-smartphone market that would put billions of devices within the satellite industry’s reach. It is raising consumer awareness for how everyday devices can connect directly to satellites to deliver services that other companies are racing to match or exceed.

Initial satellite services Apple launched in November for iPhone 14 customers are limited to emergency SOS messaging in the United States and Canada, ahead of more global coverage. There are plans to deliver solutions beyond basic SOS, although these remain under wraps.

In February, Globalstar ordered a third-generation constellation in a contract worth up to $430 million to upgrade its capabilities.

Some 85% of the capacity of this new network is being set aside for Apple, which agreed to a deal that covers most of the constellation’s cost.

Of course, this level of exposure to a new market is not without risks. Globalstar still needs to finance the constellation before Apple can reimburse it.

However, Globalstar also has another potentially lucrative growth area up its sleeves. Following years of regulatory and technical legwork, the company is close to securing several enterprise customers looking to use the satellite spectrum it has repurposed for terrestrial communications.

Globalstar views this U.S. spectrum as the company’s most valuable asset and has said its international frequencies could one day be worth even more.

Amazon’s internet constellation Project Kuiper shocked the space industry in 2022 with the largest commercial deal in history for 83 launches.

In one fell swoop, the company bought up most of the world’s heavy-lift satellite launch capacity, booking 38 launches on United Launch Alliance’s Vulcan Centaur, 27 on Blue Origin’s New Glenn, and 18 on Arianespace’s Ariane 6.

Amazon’s bulk buy is priming ULA to improve production capacity to support 20 to 25 Vulcan launches per year, while Arianespace is upgrading the Ariane 64’s strap-on boosters to launch 35 to 40 Kuiper satellites at a time.

Notably, the world’s biggest launch provider SpaceX did not get any contracts from Amazon, presumably because SpaceX’s Starlink is a rival internet constellation. But Dave Limp, Amazon’s senior vice president, said buying launches from SpaceX is not out of the question if that’s what it takes to meet a crucial deadline: Project Kuiper needs half of its internet constellation – or about 1,600 satellites — to be operating in low Earth orbit by July 2026.

SPAC mergers fell back to Earth in 2022 after propelling nine space companies to the public markets last year.

Their popularity among investors has dwindled amid poor macroeconomic conditions, stricter regulations, and the lackluster performance of space firms that already went public by merging with a SPAC, or special purpose acquisition company.

SPACs offer companies a fast track to the public markets without all the due diligence that accompanies traditional stock listings. Their decline also raises questions over how suitable the public market is for young space companies even once the economy improves.

This article originally appeared in the December 2022 issue of SpaceNews magazine.