Style Points is a weekly column about how fashion intersects with the wider world.

“I had a friend who was going back to work, who’d had a baby and was let go during the pandemic. And she literally said to me, ‘Will you just send me five links and I’ll buy those things?’”

That was the genesis of Five Things You Should Buy, a Substack newsletter from veteran market editor Becky Malinsky. The simplicity of the concept is right there in the title, whether Malinsky is clueing her audience in to the best car coats or loafers. The Wall Street Journal alum wants to help readers “not spend their entire day looking for black jeans.” The project also serves a purpose for her. Now that she’s operating a personal styling business for executive women, it’s a way for her to “stay on a schedule, keep my ear to the ground, and know what’s happening—and still create the sense of service for people who can’t afford my services.” Malinsky calls the undertaking “scrappy”: she uses herself as a model, in casual snapshots taken at her apartment. “I’m able to give real-world, real-life references: I wore it to an activity with my kid, or out to a fancy dinner,” she says.

Fashion newsletters exploded during the pandemic. So did shopping podcasts. But the latest iteration seems to be missives built around commerce, aiming to cull the black hole of Google results and Instagram ads out there into a curated list with an editorial point of view. (Some standouts of the genre: Laurel Pantin’s Earl Earl, Kitty Guo’s Worn In, Worn Out, and Jess Nell Graves’ The Love List.)

The promise of these publications is a personal stylist at your fingertips. It’s something that, in this strange, liminal time when we’re all renegotiating our relationship to fashion and figuring out how to get dressed again, seems sorely needed: a decoder ring for style. One of the biggest hits for Malinsky was an issue called What to Wear to Dinner, which she says is “one of the biggest questions I am getting from friends, from people writing back to the newsletter, from clients: What do I wear now to dress up if I’m not wearing a cocktail dress or my sweatpants?”

Even an expert like Hillary Kerr, the co-founder and chief content officer of Who What Wear, admits to some hand-wringing around what to wear now. “After having two kids in two years and then a long fitness journey during the pandemic, I woke up one morning and realized that I wasn’t exactly sure what my personal style was anymore. I didn’t even know what size I was, really,” she says. “My Before Times clothes didn’t make as much sense with my current life and responsibilities.” She made figuring out this new phase a public project, via her newsletter Hi Everyone. One of her most popular franchises involves test drives of tricky items (jeans, bodysuits, trousers), using herself as a guinea pig. For the great pants try-on, she ordered and culled through 36 pairs, admitting, “Our house ended up looking a bit like a shipping depot.”

There’s a big sister feeling to the newsletter, as Kerr invites you to make sense of it all along with her—and puts herself in front of the lens. “As someone who did not see my body type represented in the media when I was growing up, I kept thinking it would be nice to show, on my own real body, what these things look like,” Kerr explains. “And along the way, figure out what exactly I wanted to wear now.” Every time she does a try-on, “Folks go crazy for it. I have the most insane responses,” she says. Readers even DM her for styling intel. “I’ve helped pick out shoes for someone’s wedding and turned someone on to a great blazer that they wore to a job interview—and they got the job.”

Writer Caroline Reilly calls herself the Jill Zarin of her friend group, constantly cheering on their purchases. She sees her newsletter Material Girl as an extension of that role. “I want to feel like that girl you run into in the bathroom at the restaurant who’s like, ‘Here’s all the details to my outfit. Here’s how much I paid for it. Here’s the size I’m wearing. Do you want to try it on?’” she says. She considers herself to be the opposite of “gatekeeping girls who are like, ‘I don’t want to tell people where I got this because it’ll sell out.’ I don’t care if anything sells out. I buy two of everything anyway.”

Everything Reilly features, from clothes to beauty products, is something she owns and has worn. Paid subscribers have the option to take things a step further and ask for one-on-one shopping advice. And Reilly, who has endometriosis, makes a point of guiding readers to “clothing that doesn’t instigate pain flares, or that I can work comfortably in when my pain is bad. I find that even for people who don’t have endo or chronic pain, those items seem to land really well.” That content is never paywalled, “just on principle. I think that’s something that should be available for everybody.”

Laura Reilly’s newsletter Magasin delivers fashion news and intel on under-the-radar labels along with shopping links. She sees her message as “more dialogue-y than prescriptive…I like to know what’s going on and be able to form my own opinion.” Her reader “isn’t starting from square one, and isn’t really looking for someone to tell them what to buy or how to dress,” she says. “It’s nice because I can speak to the audience at a little bit more of an advanced level than, say, let me introduce you to Martine Rose.” Rather than your friend who’s guiding you through the purchase of new work clothes, Reilly might be the one who’s (solicitedly) spamming you with the best SSENSE links. 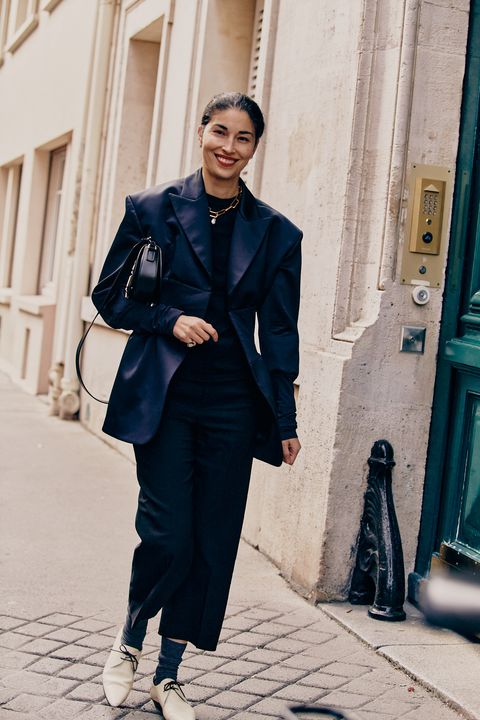 Magasin grew out of shopping prompts Reilly put up on Instagram, (e.g. “What are you looking for on eBay right now?”), and she sees it as a way to share the cornucopia of fashion offerings right now. “During the pandemic, there wasn’t a ton of great fashion coming out; everyone was returning to vintage and archive,” she says. “But now that things have opened back up, there’s so much good stuff. It’s something that we want to be able to talk about and share and exchange excitement around. We can be supporting the actual products that are coming out of this artistic boom.” Crowdsourcing is an important part of the process: in the fall, she started a collaborative Google Sheet “and dumped a lot of information that I was given by readers in terms what they’re shopping for, what they’ve bought, what they’re predicting as fall trends.”

Magasin has grown to the point where it’s become a full-time endeavor for Reilly, and she hired someone to help out with the enterprise a few months ago, in advance of the Black Friday/Cyber Monday rush. She also put on her first event: a closet sale that was entirely promoted through the newsletter and drew a crowd. A recent issue featured people like model Kelly Mittendorf and Peter Do co-founder Jessica Wu spilling the details of their shopping carts. (She looks for those who have “a discerning, chiseled eye.”)

How does she decide who to spotlight? Reilly’s motto for Magasin could probably apply to all of these newsletters: “If I’m interested, my readers probably are.”

Véronique Hyland is ELLE’s fashion features director and the author of the book Dress Code. Her work has previously appeared in the New York Times, the New Yorker, W, New York magazine, Harper’s Bazaar, and Condé Nast Traveler.
This article was originally published by Elle.com. Read the original article here.
Share on Facebook
Share on Twitter
Share on Pinterest
Share on LinkedIn