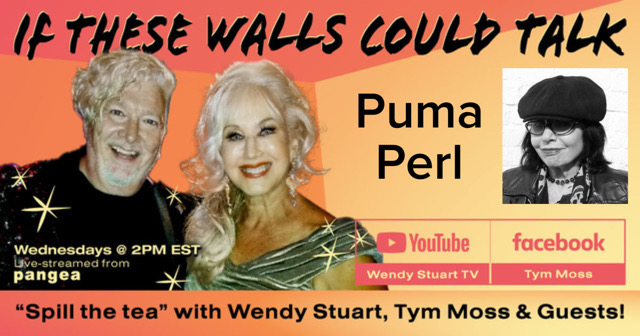 Who else but hosts Wendy Stuart and Tym Moss could “spill the tea” on their weekly show “If These Walls Could Talk” live from Pangea Restaurant on the Lower Eastside of NYC, with their unique style of honest, and emotional interviews, sharing the fascinating backstory of celebrities, entertainers, recording artists, writers and artists and bringing their audience along for a fantastic ride.

Puma Perl will be a featured guest on “If These Walls Could Talk” with hosts Wendy Stuart and Tym Moss on Wednesday, January 4th, 2023 at 2 PM ET live from the infamous Pangea Restaurant.

Wendy Stuart is an author, celebrity interviewer, model, filmmaker and along with If These Walls Could Talk she hosts TriVersity Talk, a weekly web series with featured guests discussing their lives, activism and pressing issues in the LGBTQ Community.

Tym Moss is a popular NYC singer, actor, and radio/tv host who recently starred in the hit indie film “JUNK” to critical acclaim.

Puma Perl & Friends is art at its best; collaborative, thrilling, and authentic. There is no posturing; it’s poetry & music & its own divine experience – Elizabeth Grey, Writer

Puma Perl is a poet, writer, journalist, and performer. She’s the author of two chapbooks, Ruby True and the award-winning Belinda and Her Friends, and three full-length poetry collections, knuckle tattoos (Erbacce Press, UK), Retrograde (great weather for MEDIA), and Birthdays Before and After (Beyond Baroque Books.) She was the creator, curator, and producer of Puma’s Pandemonium, which launched at the Bowery Electric in 2012 and brought spoken word together with rock and roll. The final Pandemonium took place in January, 2020. Her band, Puma Perl and Friends, has been performing together for over ten years. The core members are Joff Wilson, Joe Sztabnik, and Dave Donen. They have played in venues throughout the metropolitan area and New York State, featuring her original poetry. In addition, Puma and Joe Sztabnik often work as a duo, and provided live stream entertainment during the height of the pandemic when in-person shows were limited. They have also collaborated on songwriting, videos and recordings. With drummer Dave Donen, they often perform as a trio and enjoy a monthly residency at the Anyway Café, in the East Village

Puma has received three awards from the New York Press Association in recognition of her journalism and was the recipient of the 2016 Acker Award in the category of writing. In May of 2021, she curated and performed in four shows as part of the HOWL Happening! Artist in Residence program. In 2022, she was honored to read/perform at the Whitney Biennial, New York City, and at the Kingston Pop Museum, in addition to many other venues and festivals.

She has performed as a solo feature and with others throughout the United States and in Europe. During the pandemic, she contributed a weekly column, “Writing the Apocalypse,” to Chelsea Community News which included poetry, prose, journalism and photographic essays. Puma lives and works on the Lower East of Manhattan.

Watch Puma Perl on “If These Walls Could Talk” with hosts Wendy Stuart and Tym Moss on YouTube here:

Subscribe and listen to “If These Walls Could Talk” on Apple Podcasts/iTunes here:

A Million Little Things: Things We Must See Before It’s Over!
Amazon’s advertising business grew 19%, while Google and Meta both deal with slowdowns
7 Stories About Goblins and Tricksters
Ovzon taps in SpaceX for delayed debut satellite
Stocks making the biggest moves premarket: Chegg, Baidu, Bed Bath & Beyond, Hertz and more