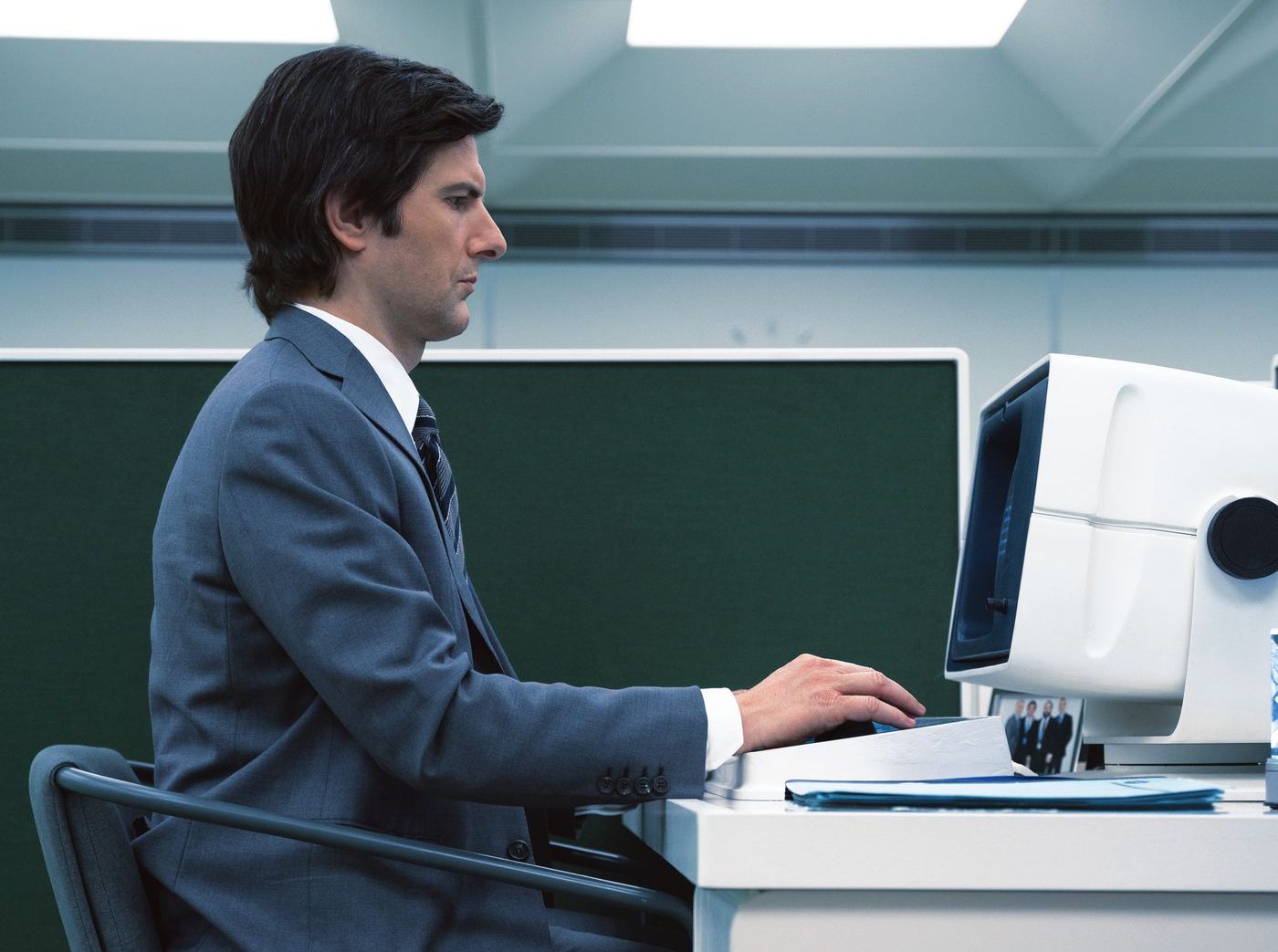 I love reading about work, probably because it’s more fun to read about jobs than it is to actually do them. Not that I haven’t experimented with a variety of ways of earning a paycheck. I started my work-life in high school as a cart collector and grocery bagger at the supermarket in my hometown, then somehow got promoted to a role as a technician counting pills at the in-store pharmacy. From there, I landed a job as a Ferris wheel operator, which gave me the experience I needed to find another job at a different, larger Ferris wheel the next summer. When the theme park closed for the season, I found work in a button factory.

But the strangest job I’ve ever had was at Facebook. This was in 2007. I worked as a Customer Support Representative, which meant I responded to emails from people who were locked out of their accounts, usually for violating the site’s terms of service. What was strange about the job was not only the many ways people found to get themselves banned, but how I began to think about myself in relation to work. While I’d taken the job to pay down my student loan debt, I caught myself investing the work with more meaning than it deserved, nodding along as my boss, a young Mark Zuckerberg, rallied our team around his mission to “change the world.” I started to convince myself, in a way I hadn’t at the pharmacy or Ferris wheel, that maybe my life was in tech, that maybe this was the work I was meant to do.

My debut novel, Please Report Your Bug Here, explores how work can warp our sense of reality. Ethan, an employee at a dating app startup, loses himself to his job—figuratively and literally—as he tries to track down the cause of a software bug that transports him to other worlds. As he navigates between these worlds, he’s forced to confront who and what he believes in.

Novels about work are never only about work. They show us characters searching for meaning and purpose, or struggling to capture their own sense of identity. They show us what it’s like to lose yourself and then find yourself again.

At once hilarious and heartbreaking, this slim novel follows a temp worker as she takes on a series of increasingly absurd jobs, from an assassin’s assistant to the Chairman of the Board. At some point she even takes on a job as a barnacle—yes, a sea creature—and listens to her coworker’s dream of becoming “the barnacle that rides on the back of a whale. A special kind of breed.” It’s probably the one scene that’s clung in my memory more than any other in the last five years, because it highlights the very relatable absurdity of workplace aspirations.

Released in 2018, Severance is now talked about as a book that predicted the pandemic. And rightly so: Shen Fever brings the world to a halt, and the novel’s protagonist, Candace, flees New York with a group of survivors to travel to a place called the Facility. What’s sometimes easy to forget about this novel is that Candace, a millennial office worker at a Bible publishing company, is so devoted to the routine of her monotonous job that she hardly notices when the plague hits. A predictable routine may distract you from the problems of the world, the novel suggests, but the bliss of such monotony is only temporary.

The Beautiful Bureaucrat by Helen Phillips

Part modern fairy tale, part existentialist thriller, this book lives in the same universe as the TV show Severance, though it was written several years before. The protagonist, Josephine, desperate for money, takes on a data-entry job. But it’s not immediately clear what the purpose of the work is. Only later does the truth about her work begin to take shape in her mind. A workplace novel that captures the surreal psychological isolation of the office worker.

Omon (“Ommy”) has always wanted to be a cosmonaut. But when he’s recruited to join the KGB space program, he discovers the life of a cosmonaut is not exactly what he’d imagined. Omon contends with absurd and nightmarish obstacles in preparation for his mission to the moon, and in the process is forced to confront the gulf between his childhood ideal and the reality of what it means to be a cosmonaut. A short, propulsive coming-of-age tale about technology that’s also a meditation on time, memory, and identity.

My Year of Meats by Ruth Ozeki

Last year, after reading A Tale for the Time Being and The Book of Form and Emptiness, I decided to skip back in time, to read Ozeki’s debut. In My Year of Meats, documentarian Jane Takagi-Little produces My American Wife!, a Japanese television show sponsored by an American meat-exporting business. But her involvement with the show is complicated by her discovery of unsavory truths about the meat industry’s use of a dangerous hormone. The stakes rise when she crosses paths with a Japanese housewife struggling to leave her husband. Ozeki worked as a documentary filmmaker before publishing her debut novel; she writes about the profession and its ethics with lived-in detail.

In his debut story collection, Adjei-Brenyah confronts the racism and consumerism that runs rampant in the United States. The title story features a department store salesman forced to deal with “ravenous” shoppers who stampede into the store hungry for “PoleStuff stuff.” In this capitalist dystopia, as a reward for dealing with violent shoppers, the store promises that the worker with the most sales can take home any coat in the store, which our narrator plans to give to his mother when he wins.

Since the collection was published, in 2018, I’ve returned most often to the opening story, “The Finkelstein 5,” in which the protagonist, Emmanuel, can dial his blackness up or down depending on his situation. The story shines light on the absurd maneuvers Black people are forced to make—in and out of the workplace—in order to survive in 21st-century America. Adjei-Brenyah’s debut novel, Chain-Gang All-Stars, comes out this April.

Days of Distraction by Alexandra Chang

A writer at a major tech publication leaves San Francisco with her boyfriend to remake her life in upstate New York. Though she plans to work remotely, the 24-year-old narrator finds it impossible to escape the drama of her toxic work environment. As she contends with what to do about her position at work, the scope of the book widens to include her reflections on race, including her role in an interracial relationship. Though her job was to report on the tech bros and billionaires of Silicon Valley, her research on Asian Americans in history helps her confront questions about her own identity.

When We Cease to Understand the World by Benjamin Labatut

Reading this novel is like going down the rabbit hole of an alternate-dimension Wikipedia. Described by its author as “a work of fiction based on real events,” the novel not only introduces us to the work of famous scientists and mathematicians such as Heisenberg and Schrödinger, it also offers a richly detailed (fictionalized) look into their lives. Unsurprisingly, there’s not much work-life balance for these luminaries, though we do see how they might have grappled with their discoveries, some of which result in unanticipated moral consequences. An extreme example of how work can become your identity and—for at least one mathematician, who decides mathematics is too dangerous to pursue—who you become when you decide to abandon your work altogether.

The Red Arrow by William Brewer

The protagonist, a struggling writer plagued by debt, takes on a job ghostwriting a famous physicist’s memoir. At the same time, he decides to undergo experimental therapy to cure his severe depression, or what he refers to as “The Mist.” But when the physicist vanishes, everything’s left in limbo. In this trippy novel about time and Italy and psilocybin, Brewer expertly illustrates the way work—both the work of therapy and of ghostwriting—can alter your way of seeing the world and shape the very nature of your reality.